Journalists in conflict zones are increasingly targeted for their work. Media outlets must take ownership of their responsibilities

Unfortunately, the remark attributed to Senator Hiram Johnson remains as valid today as when it was uttered in 1917: “The first casualty when war comes is truth.” With the outbreak of armed conflict, information decays into propaganda, thereby becoming an additional weapon of war. That makes the independent work of reporters all the more important in zones of war or crisis. Only a free and independent press ensures objective information from all those affected by armed conflict.

The situation for reporters and their colleagues in the field is deteriorating by the day. Protective arrangements such as the Geneva Convention and “Press” or “TV” labels on body armor and vehicles no longer protect their legitimate users. Indeed, journalists are increasingly becoming victims, and not by coincidence. They are being targeted deliberately.

The reasons are numerous. First, independent reporting is unwelcome in war zones. Journalists are often detained or kidnapped, to be used as propaganda tools or held for ransom. The videos of the Islamic State celebrating the killings of reporters are evidence enough in their brutality.

Yet this grim picture is quickly evolving elsewhere as well, in non-military contexts, even in Europe. Last summer, for instance, Germans could witness this phenomenon firsthand. To report on the disturbances and neo-Nazi demonstrations in the eastern city of Chemnitz, journalists could not do their jobs without police protection or facing manifest bodily harm on the streets.

The core of the problem is that, instead of being accepted as neutral observers, journalists are increasingly regarded as parties to the conflicts on which they report.

The dangers can also be categorized regionally. In Latin America and Africa, local reporters and correspondents are chief targets. In their various conflict zones, Al Shabaab, Boko Haram, Al Qaeda, the Taliban and IS seek to silence local journalists. The Taliban, for example, specifically hunts down Afghan journalists. Protecting correspondents on the ground requires constantly revamped measures that now include the use of aliases.

Despite all the threats they face, journalists want to and must do their jobs. Some risks can be minimized, above all through comprehensive security management. Deployments must be carefully planned, with proven and reliable contacts on the ground an absolute necessity. Furthermore, reporters require special training, including first aid, particularly when operating in hostile environments. Reporters also need competent and closely coordinated guidance and support from their media outlets spanning every single moment of their deployment. A network of contacts to colleagues in the danger zone should also be maintained.

In short, media outlets must go beyond mere awareness of their legal and ethical responsibility toward their reporters. They have to weigh whether a reporting deployment should be cut short or perhaps whether the dangers are too great to even authorize it in the first place. They must take ownership of these principles. This involves defining with precision the company’s risk tolerance and providing active security for their journalists in the field. We owe much to the men and women whose courageous reporting helps truth reach the public’s attention. 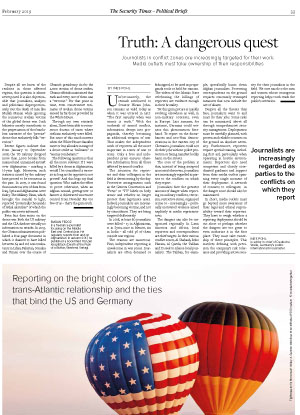