Hello. My name is Vladimir (he/him) 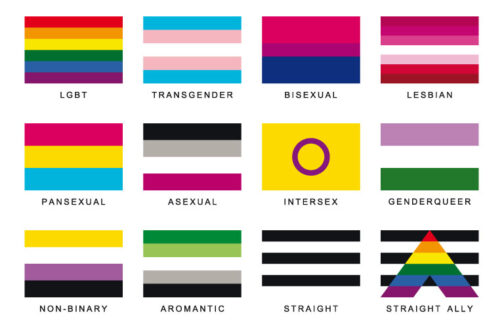 Vladimir Putin’s 2012 campaign for a third presidential term invoked the term “Gayropa” as a popular concept to describe a perverted, subordinate Europe. The same period saw concerns aired on Radio Echo Moskvy that “homosexual Europe will be harassing normal Russia under the pretense that it is teaching us democracy.” Not long after, the Security Council of Russia itself weighed in on the need to strengthen “national security in the moral sphere” in light of the West’s “aggressive” promotion of homosexuality.

Ever since Russia took a decisive turn towards authoritarian consolidation and a more assertive foreign policy, a backlash against established gender justice rights has emerged. An elusive “West” is represented as a neo-imperial colonizer bent on imploding Russian society through the imposition of supposedly alien values – first and foremost the hideous idea of gender. Questioning socially constructed roles, acting against domestic violence and legitimizing same sex marriage all get coded as degenerate and incompatible with traditional Russian values. Gender equality is cast as a threat to Russian integrity on par with a military strike, which in turn justifies defense mechanisms.

Such is the chain of logic employed to argue that the preservation of Russia’s moral sovereignty necessarily requires a “sovereign democracy.” In other words, by fashioning gender into a security threat and the West as its main source of dissemination, Russia justifies its own mode of governance. Researchers have long reached consensus that gender acts as a form of “symbolic glue.” It becomes an umbrella term that can rally together different factions by acting as a placeholder for other messages. Depending on the context, anti-gender campaigns across the globe have at times associated gender with increased individualism, globalization, neoliberalism and even communism. In the case of Russia, the issue of gender is portrayed as a symbol of Western cultural imperialism and is therefore used as a shortcut to delegitimize democratization and human rights altogether.

Importantly, the anti-gender backlash also allows Russia to reassert itself. A patriarchal global order still prevails where not just nation-states, but also their relationships among one another are a gendered phenomenon. Valerie Sperling, whose research focuses on issues of gender in Russian politics, theorizes that masculinity has been a vector for Putin to claim power. In what political sociologist Koen Slootmaeckers terms “competing masculinities” between states, Putin’s assertion of an ideal-type (according to patriarchal standards) masculinity both as an individual and even more so in his foreign policy has allowed the entire nation to regain status. It is no coincidence that Putin quoted the popular rhyme “whether you like it or not, my little beauty, you will have to endure it” – a barefaced normalization of rape – at a press conference with Emmanuel Macron in early February in reference to Ukrainian President Volodymyr Zelensky. This performance is a rendition of that type of masculinity that is linked to ultimate power.

Displaying force, dominance and misogyny alongside his framing of the West as emasculated by gender equality policies enables the Kremlin to position Russia as the last “real man” standing. There is no irony lost in Russia’s depiction of itself as the bedrock of Christianity and of Western civilization, precisely because of its preservation of traditional patriarchal values.

It would behoove security policymakers to note that Russia’s anti-gender backlash goes beyond its role of legitimizing aggressive foreign policy in reaction to alleged Western imperialism and casting authoritarian governance as an unavoidable mechanism of defense. Indeed, as with every authoritarian system, foreign policy strategy also fulfils a domestic purpose. In this case, the backlash also serves to justify repression on the home front in the name of bolstering regime survival.

On the policy level, the “foreign agent” law, adopted in 2012, was used to quietly shut down gender studies. The Gender Studies Centre in Moscow was forced to close in 2013 and the same fate awaited the Ivanovo Centre a few years later. The European University at Saint Petersburg was forbidden from teaching for over two years, officially because it was violating building safety standards such as fire regulations. The affair began when Duma member Vitaly Milonov, using the anti-gay propaganda law introduced in 2013, filed a complaint against the university for spreading homosexual propaganda. Four years later, in February 2017, Russian law levied a dramatic blow to the daily lives of women by decriminalizing domestic violence.

Russia and Belarus are the only post-Soviet countries to lack a separate law on domestic violence. Feminists have campaigned for its adoption since the 1990s. In 2016, a law was passed that at least distinguished domestic battery from other forms of violence – but its dismantling took a mere six months. Duma member Yelena Mizulina had euphemistically deemed it the “slap bill” and claimed it was pushed by a Western-led “feminist lobby” and thwarted Russia’s sovereignty and values.

These examples are testament to the potency ascribed to gender issues, such that anyone advocating for them is cast as a fifth column insurrectionist out to undermine the Russian nation. Anti-gender backlash is a handy cover to justify authoritarian tactics, both at home and abroad.

And this in anything but an isolated incident. Last year, research undertaken by the European Parliamentary Forum for Sexual and Reproductive Rights established that the backlash against gender equality stems from a transnationally organized and financed network, where Russia plays a prominent role. Russia has been at the forefront of the attempts to dilute women’s rights enshrined in the UN system. Since 2009, more than $700 million has been spent in Europe on campaigns against sexual and reproductive rights, of which $180 million can be traced to Russia.

Recognizing anti-gender backlash is imperative not just for those addressing human security, but also for those who define security only in military terms. After all, demonizing gender advocacy as imperialist, and juxtaposing an effeminate West with a virile Russia while repressing equality proponents within, serves to consolidate authoritarianism and acts as a gateway to violence elsewhere.

Leandra Bias is a senior researcher at swisspeace. Her work examines anti-gender backlash in authoritarian regimes and advances alternatives with which Feminist Foreign Policy can respond. 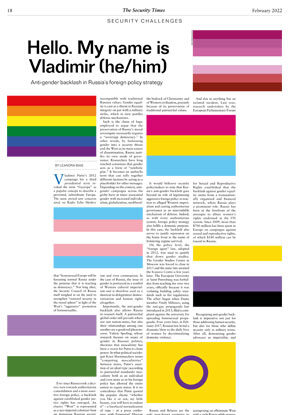