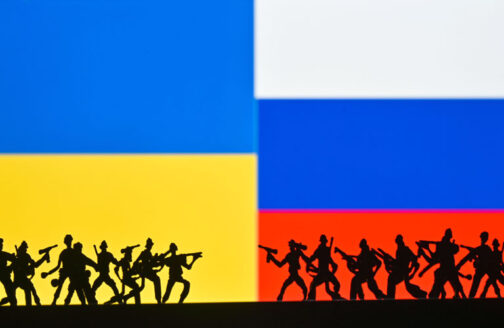 What Russian intervention in Syria says about Putin

The West is bewildered. What is the driving force behind President Vladimir Putin’s foreign policy? What are his goals and what tools is he willing to use to achieve them? To answer these questions, it would be wise to take a look back at Syria – Putin’s longest, most extensive foreign intervention. Since 2011, Moscow has worked to secure the rule of Bashar al-Assad, a president beset by an armed insurgency. In doing so, Putin has restored Russia’s position as a global power, succeeded the US as the force for order in the Middle East and expanded Moscow’s military presence in the Eastern Mediterranean – and thus on NATO’s southern flank. Tracking Putin’s moves here helps us understand his potential foreign policy actions elsewhere.

The Russian president aspires to communicate at eye level with the world’s most powerful leaders. He runs an empire and wants to be treated accordingly. This is precisely what he’s achieved in Syria with the three instruments at his disposal: diplomatic clout, military strength and propaganda.

As a permanent member of the UN Security Council, Moscow has held its protective hand over Assad for 11 years. Between 2011 and 2020, Russia vetoed 16 resolutions on Syria. As a result, crimes against international law committed by the Syrian regime could not be referred to the International Criminal Court in The Hague. Billions of dollars of UN aid, which had to be distributed in agreement with Damascus, was misused by the regime in order to consolidate its power. Ultimately, this aid benefited only those loyal to the regime.

Only the extremist-controlled province of Idlib, a refuge for millions of Assad opponents, received direct humanitarian aid from abroad – via the last of originally four cross-border aid corridors set up by the UN to supply regions outside the regime’s control. This cross-border aid had to be renewed by the Security Council every six months, at which point the West would beg Putin to allow them to continue providing it. In diplomatic terms, the Kremlin leader has come a long way in Syria.

When Russia failed to stymie resolutions, it simply weakened them in such a way that its allies were protected. The best example of this is Resolution 2254 from December 2015 – the UN document to which all actors involved in the Syria conflict still refer today. The resolution was the result of intensive talks between Moscow and Washington, which in October 2015 seized on the International Syria Contact Group as the only serious diplomatic initiative that could resolve the conflict. Both countries were already militarily engaged in Syria at the time – the US since September 2014 to fight the Islamic State group (IS), and Russia since September 2015 to rescue Assad, who had lost control of large swaths of the country. Russian Foreign Minister Sergei Lavrov and his then-US counterpart John Kerry met at eye level – just a year and a half after President Barack Obama had degraded Russia by referring to it as a “regional power” in March 2014.

Resolution 2254 called for an end to attacks on civilians, unimpeded humanitarian access and the release of individuals arbitrarily detained. For months, Lavrov and Kerry sought de-escalation. Together, they led two negotiating groups in an attempt to contain the violence and provide humanitarian aid to the people – to no avail. The war not only continued as before, it escalated.

Russia became not only the crucial partner in this campaign, but the game-changer of the war. In the summer of 2015, Putin began sending troops and military equipment at Assad’s request – partly in the hope that involvement in Syria would end Russia’s international isolation, which was triggered a year earlier by the war in Ukraine and the earlier annexation of Crimea. Damascus granted Moscow free and unlimited use of Khmeimim Airport, which Putin then upgraded to a Russian air base.

The supply of personnel and weapons also passed through the Russian naval base in Tartus, which Moscow has maintained since 1977. It is Russia’s only access to the Mediterranean Sea. In January 2017, Putin secured the rights to use the port for a virtually indefinite period; if neither partner objects, the 49 years contractually agreed upon are automatically extended for 25 years at a time. The site is of great strategic importance to Putin. It guarantees the Kremlin influence in the Eastern Mediterranean, which he needs to prevent NATO’s dominance over the entire Mediterranean Sea. From Tartus, Moscow is able to pose a military threat to NATO’s southern flank and thus counter the alliance’s expansion.

Putin is a tactician, not a strategist

Despite appearances, the Russian leader lacked a long-term strategy for Syria in 2011. The decision to keep Bashar al-Assad in power was a reaction to NATO’s muscle-flexing in the region, particularly in Libya. In March 2011, Moscow’s abstention in the UN Security Council enabled NATO’s intervention in Libya. Shortly thereafter, NATO bombed Muammar al-Gaddafi’s regime out of existence, even though its mission under the UN mandate had been to protect civilians. Putin was determined to prevent a repeat in Syria. After all, Assad was Moscow’s last ally in the Middle East. During the 2000s, the entire region had fallen almost entirely under US influence.

Putin’s plan for Damascus was thus limited to preventing Western-backed regime change. The Kremlin chief emerged as Assad’s most powerful patron, making himself indispensable to all parties. Eschewing rigid calculations, Putin simply reacted to current events – the more dynamic, the better for him. Indeed, as a short-tempered tactician and autocrat, he uses every crisis to his advantage, whereas Western politicians must take public opinion into account, involve their parliaments and coordinate their actions.

As a result, in September 2013, Putin achieved his greatest tactical coup. After the August 21 poison gas attacks on the Damascus suburbs that killed more than 1,400 people, President Obama found himself under pressure to act. A year earlier, he had referred to the use of chemical weapons as a red line; now he was desperate to avoid a military strike, fearing the US could be drawn into another endless war. Putin helped him out of a tight spot. He persuaded the Syrian regime to surrender and destroy its chemical weapons stockpile through the Organisation for the Prohibition of Chemical Weapons (OPCW), providing Obama with a welcome excuse not to attack. Instead of being punished for gassing hundreds of civilians, the Assad regime became a partner, the OPCW inspectors received the Nobel Peace Prize shortly thereafter, and Putin began looking like a confident crisis manager.

Even the military buildup in Syria was not the result of any far-sighted strategy, but reflective of an ad hoc response to shifting needs. On several occasions, Putin announced that he would withdraw troops, only to then intensify and consolidate Russia’s military presence.

This back-and-forth fueled an image of the Kremlin leader as unpredictable. However, viewed in terms of Russia’s power interests, some of his moves were predictable. Given Putin’s tendency to fill in the void left by (primarily) Western actors, it makes sense to not hesitate and to proceed with consistency and predictability when engaged in conflict with him.

In everything Russia does in Syria, Putin knows his limits. He calculates his moves precisely, minimizing his risks.

The intervention in Syria was far away and thus unpopular for most Russians, so Putin was careful to mitigate his own losses. From the outset, he limited the mission to military advisers, the air force, some naval units and a few special forces.

He left the war on the ground to others, first and foremost Iran, which was building up the National Defense Forces in emulation of the Iranian Revolutionary Guard Corps. For years, this mercenary army had been recapturing opposition areas for Assad. Without Russian air support, however, it would have failed, and in this respect, Putin provided exactly what the regime needed – expertise and modern technology with as little personnel as possible – without risking too much. By testing new weapons systems in Syria, the Russian army was able to both modernize and increase its sales. In this sense, the operation in Syria served as a military and technological litmus test for a possible confrontation with Ukraine.

Putin is pragmatic and flexible

More than any other conflict, the Syrian war was characterized by shifting alliances. Intervening powers did not stick to long-standing associations, but entered into short-term alliances of convenience to advance their own interests. And Putin perfected this skill.

In early 2017, after years of diplomatic cooperation with the United States, Moscow launched new talks in the Kazakh capital of Astana. Putin banked on reaching an understanding with the regional powers of Iran and Turkey, as talks with Washington under Donald Trump were simply pointless and the Europeans no longer had any say in Syria.

The idea was to have the three most influential warring parties defuse the conflict and thereby facilitate negotiations. Ceasefires became “de-escalation zones,” but that was a misnomer – Russia and Iran continued to fight alongside Assad, while Turkey opened another front against the Kurds in the north in early 2018.

At this point, Putin found a sparring partner in Turkish President Recep Tayyip Erdoğan. Erdoğan had turned his back on his former friend Assad at the start of the uprising and had been funding Islamist militias for years, which meant that Turkey and Russia were on opposing sides in the conflict.

Yet they still worked together. In Idlib, Putin promised to put the brakes on Assad’s plans to recapture the city, so that millions of internally displaced people would not be pushed further toward Turkey, while Erdoğan was tasked with containing jihadists. Neither of them succeeded. In the Kurdish-majority, autonomously administered northeast, Russian and Turkish soldiers patrolled together to maintain a buffer zone between Turkey and the Kurdish People’s Defense Units (YPG). However, the region continued to suffer violent clashes.

The highly complex and tense relationship between the two autocrats worked only because each was extremely pragmatic in his thinking. Putin treated the various conflicts with Turkey separately – when the situation in Idlib escalated, it was prevented from affecting Turkish-Russian cooperation east of the Euphrates. Erdoğan also prevented military clashes in one area from affecting relations with Russia elsewhere in Syria.

After 11 years of war in Syria, Putin now finds himself in a comfortable position. He has earned the devotion of the Damascene dictator, whom many countries are likely to acknowledge again sooner or later. Russia’s interests in the Middle East seem secure in the medium term. Yet the current situation in Ukraine is different, as President Zelensky wants to lead his people in the direction of the West. For Putin, the biggest difference is the time factor – while it works in his favor in Syria, it is likely to work against him in Ukraine.

Kristin Helberg is a journalist and expert on the conflict in Syria. She works for ARD, ORF and other TV broadcasters. Her book Der Syrien-Krieg: Lösung eines Weltkonflikts (The war in Syria: Solving a world conflict) was published by Herder in 2018.

Slaying the dragon: We must re-address arms control 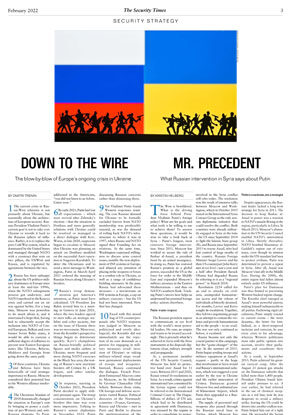