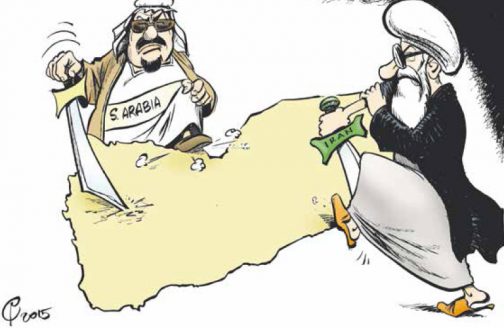 When Lord Louis MountbatteDn became Supreme Allied Commander, South East Asia Command in 1943, he visited various units of the 14th Army that later retook Burma from Japanese forces. On these visits, it is said that he made the same joke time and again: “I understand you believe you’re the forgotten army. That’s not true. The truth is nobody’s ever bloody well heard of you!” This being a British army, raucous laughter ensued, as well as an immediate rise in unit morale.

The people and governments of war-torn countries and regions, however, often face a serious version of the same challenge. The question is whether the Middle East, a zone of high-profile armed conflicts that threaten international peace and security, is actually becoming a zone full of half-forgotten, largely unheardof wars.

The Middle East and North Africa remained at the heart of global security concerns throughout 2016, and that seems unlikely to change any time soon. Thanks to its strategic location and natural resources, the arena remains a focus for external powers as they pursue their interests directly, via local alliances as well as through proxy forces.

However, while the strategic significance of the region is as great as ever, the focus and content of concern are shifting. The highest-profile, highest-priority set of problems is certainly the war in Syria and its external interventions. The regional role and ambitions of Iran also draw a great deal of attention. And then there is the war and humanitarian crisis in Yemen, chaos in Libya, the war in the Egyptian Sinai, the continuing activities of Al-Qaeda in the Islamic Maghreb and the problem of political succession in Algeria – all of major actual or potential strategic significance, yet relatively low political interest and engagement.

Hence the problem of bandwidth. How many crises can simultaneously consume the focus of a middle-ranking power, or even one of the great powers? The machinery of government works on an impressively wide range of matters, but in the ministerial offices and around the cabinet tables where decisions are made, the number of items that can be handled effectively at any one time is limited.

For several decades, conflict in the Middle East primarily comprised Israel-Palestine. Iran and Iraq were added in the 1980s. Lebanon came in and out of the picture. Today, although all the issues are unresolved, Israel-Palestine draws less attention than several other conflict arenas. The conference on Israel-Palestine convened by France in January was a healthy reminder of its continuing importance, yet it could not draw all the main players to Paris. Iraq continues to see some of its most intense fighting since the US-led invasion 14 years ago, yet that country has also dropped down the hierarchy of international concern thanks to Syria.

Given the context, there is not much political muscle to spare for supporting one or another contending faction in Libya. Nor is there much political capital for trying to persuade Saudi Arabia to recognize that it will not bring peace and stability to its southern neighbor by continuing to make the rubble bounce in Yemen. And there are simply not enough hours in the day to properly consider the risks of instability and explosion in Lebanon, Algeria, Tunisia or even Jordan.

Beyond the difficulty of handling multiple issues, inadequate bandwidth poses a particularly serious problem on two points. The first is that the urgent always takes priority over the important. The pressures of today divert energy from the problems of tomorrow. A key element in the region’s security profile is the aftermath of 2011. Lying behind what was optimistically tagged the “Arab Spring” were long-term failures of governance in most Arab countries. No major Western government had given those failures much thought. Today, where the form of government has not changed, the problem persists. Other factors being equal, the long-term potential for instability remains, regardless of any short-term measures to manage the situation through the suppression of dissent.

The second is that the sheer number of events claims nuance as a casualty; a broad brush and hazy details are the order of the day.

The Iranian-Saudi relationship, now the key dividing line in the region’s political configuration, is often interpreted as a product of the division of Islam into Sunni and Shi’a. Grounds for this interpretation can be found in the religiosity of both states, but the Iranian- Saudi relationship should be equally understood as a relatively straightforward contestation for power – Arab against Persian as much as Sunni against Shi’a – in which strategic objectives are determined by the interests of the state.

At least from the Saudi perspective, one issue that exacerbates poor Saudi-Iranian relations is Yemen. Saudi authorities and some commentators attribute the lack of a quick Saudi victory in Yemen to Iranian support for the Houthi insurgents. The phrase “Iranian-backed Houthis” has entered the political lexicon. In fact, there is little evidence of major Iranian military support for the Houthis, which would be hard to deliver in the form of either military personnel or equipment. The Zaydi Shi’a of northern Yemen, who form the Houthi insurrection, are of a different sub-branch of Islam than the Shi’a of Iran. While Iran may be offering some support to the Houthis, most experts believe it pales in comparison to what Iran offers the Assad government in Syria.

Half-forgotten, largely unheardof and widely misinterpreted conflicts and issues in a region of strategic sensitivity and active contestation – it is a recipe for high international risk and potential mayhem. Amid all the pressures of an increasingly fraught international environment, the bandwidth problem must somehow be solved.

A version of this article appeared in print in February, 2017, with the headline “Attention, deficit, disorder”.

Dan Smith is director of the Stockholm International Peace Research Institute (SIPRI). His latest publication is the atlas, The State of the Middle  East (Penguin, New York).