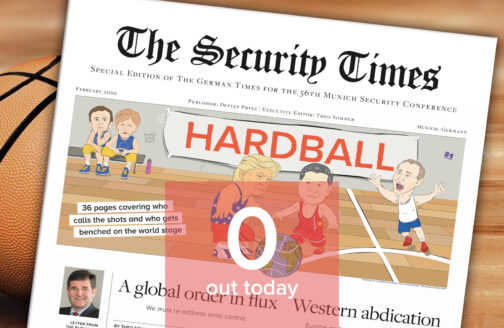 February 13, 2020 – As representatives of international politics gather to discuss current crises and conflicts at the Munich Security Conference (MSC), they will once again have a special edition of the English-language newspaper The Security Times to guide their way.

The Security Times, published by Berlin-based Times Media GmbH, has been a media partner to the MSC for over ten years, acting as a sought-after international medium in the debate on strategic security issues. The current issue, bearing the title “Hardball,” is devoted to the challenges and threats facing the liberal world order and how it can position itself vis-à-vis China and Russia, among others. Further topics include the peace process in Libya, future security policy routes for the EU and NATO, and the ongoing crisis in the Middle East.

In addition to a number of prominent authors drawn from the international security policy community, German Foreign Minister Heiko Maas argues that Germany and the EU provided an important impetus for peace at the recent Libya Conference in Berlin. The German government is eager to continue this process in Munich: “We are convinced that a steady hand can make a difference in an unsteady world,” he writes.

Berlin-based political scientist Herfried Münkler explores what will happen if the United States fails as a global leader. Who will be responsible for legal foundations and ethical norms? Are we witnessing the beginning of a new world order?

Ian Bremmer, president of the US-based Eurasia Group think tank, analyzes how Russia has succeeded in gaining influence on the international stage. Like many others, however, Moscow is also facing uncertain times. German journalist Katja Gloger and former NATO Assistant Secretary-General Heinrich Brauss attempt to find new and effective approaches to foreign and security policy for Europe and NATO. Former editor-in-chief of DIE ZEIT and current executive editor of The Security Times Theo Sommer lists off the threats to which the liberal world order is exposed.

Harvard professors Graham Allison and Joseph Nye present differing opinions on how the West should position itself in the face of an emerging China – ample food for debate there. German journalist and Middle East expert Yassin Musharbash cautions us against thinking that the fight against the Islamic State is over, arguing that IS could re-emerge at any time if the conditions that led to its initial formation persist. In his contribution, terrorism researcher Peter Neumann discusses how the West should deal with returning IS fighters.

The Security Times speaks to a globally oriented readership of opinion leaders and decision makers. Each year in Munich, the newspaper is available in the form of a special MSC conference edition. It is also present at a number of other international MSC events throughout the year. As a controlled-circulation newspaper alongside its sister publication, The German Times, it is also sent directly to high-ranking figures in the world of foreign and security policy as well as to key institutions and companies in Germany, the US, Europe and Asia. The newspaper is available online at www.the-security-times.com.