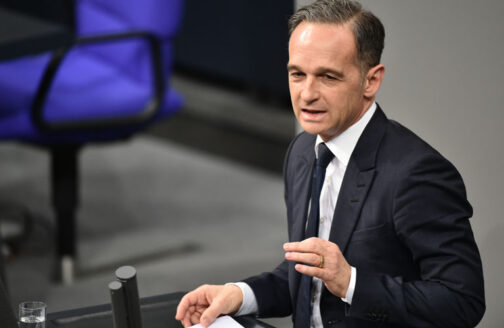 This year’s Munich Security Report diagnoses the world with a condition it calls “Westlessness,” with symptoms that include signs of Western paralysis amid a loss of global significance. Many political observers share similar concerns. While our countries and societies increasingly question their own norms and values, the argument goes, we are losing the power and will to shape the global order for the better.

Indeed, Western power and heft in the world, both economically and politically, may no longer appear as dominant as they once were. But we should not forget that this current state of affairs is a result of Western success, not a sign of failure. The very system built, led and defended over decades by liberal democracies around the world – including their support for open markets – gave rise to an international order that was stable and balanced enough to allow other countries to rise, thrive and prosper. This should not be a cause for anxiety or self-doubt, but rather a source of additional motivation to preserve and strengthen the rules-based system that we helped create in order to get there.

The speed, force and ubiquity of change may no longer surprise us, yet it continues to challenge our capacity to adapt. Globalization and digital transformation are accelerating the global reshuffle of power and wealth – within and between countries. Germany, in concert with other liberal democracies, supports the legitimate claim of billions of people to have their say on the global stage. There is no reversing the shifts, nor should there be. We should be ready to brace ourselves for change.

In order to peacefully manage this change and to penalize foul play, we need a critical mass of countries willing to stand up for the norms and rules that have served us so well. As the world is turning into an ever more interconnected set of chessboards, we cannot flip a coin to determine our next move. We must uphold the rules of the game and strengthen the organizations, institutions and alliances that enforce them. This must include the willingness to reform institutions when they lack effectiveness and amend the international order where new challenges require new norms and rules. Prosperity, security and, ultimately, peace will otherwise be at stake.

Last year at the 55th Munich Security Conference, my French counterpart Jean-Yves Le Drian and I introduced the idea of an Alliance for Multilateralism. As an individual state no longer has full control over its destiny, we will need flexible, strong and maneuverable multilateral formats and forums in order to tackle issues from climate change and security to arms control, global trade and migration. At a time when key principles of the rules-based international order and well-established instruments of international cooperation are being challenged, the Alliance for Multilateralism aims to bring together those that believe in strong and effective multilateral cooperation. An international network of states willing and able to mobilize partners and leverage our political influence can solve critical issues incrementally, one by one.

In September 2019, over 60 foreign ministers from all continents met in New York to show their political commitment to the Alliance for Multilateralism. Since then, the idea and the informal network have spread. We will jointly work to protect and preserve international norms where they come under pressure. We will help advance the reform of key multilateral institutions when it is necessary to keep them effective and to adapt them to changing realities. And we will take the initiative to devise multilateral solutions for policy areas where new challenges require collective action. The recent adoption of guiding principles on lethal autonomous weapons systems by the 125 signatories of the UN Convention on Certain Conventional Weapons is one such area where the Alliance has started to deliver.

The European Union remains the cornerstone not only of Germany’s perspective on multilateralism, but also of our approach to engaging with the world. Brexit has just demonstrated that the merits of EU membership are not self-evident. The EU was created as a project for peace and prosperity; in today’s world of new great-power competition, Europeans are becoming increasingly aware that it is also their only hope of controlling their own fate.

During Germany’s EU Presidency in the second half of 2020, we will focus on Europe’s position on the global stage. How can we become more resilient in an interconnected world? How can we achieve and maintain digital sovereignty, and at what cost? We will have to continue to improve the competitiveness of our national economies while preserving and strengthening our common social standards. Consequently, we will need to expand and deepen existing networks. With the EU-China leaders’ meeting and the summit between the EU and the African Union, we will emphasize Europe’s global aspirations and perspectives.

In the field of security and defense, close trans-Atlantic cooperation with the United States and other European partners will remain crucial. NATO has guaranteed security and prosperity in Europe for 70 years; it has been our lifeline. Our goal remains a strong European pillar on which our trans-Atlantic alliance rests. Just recently, I suggested that NATO embark on a process of reflection on the political dimension of the Alliance, which was endorsed at the NATO summit. This is a case in point for NATO’s problem-solving capacities – and for democracies and networks of democratic states more broadly.

International crises right on Europe’s borders remind us not only of a need for collective action by the West, but also of our neighbors’ need for a united Europe. In Ukraine, we are continuing to work together with France to help resolve a conflict at the heart of Europe (the OSCE’s crucial role along every step of the way is another testimony to effective multilateralism). While progress is far from satisfactory, the past year has seen renewed and earnest efforts to improve the humanitarian situation and chart a path toward a peaceful solution.

On Libya, we have taken the initiative to corral international actors in support of the United Nations’ Special Representative’s peace plan, to help get the conflict parties to the negotiating table and to restore compliance with the Security Council’s arms embargo. This Berlin Process has only just begun – indeed, all sides have thus far continued to supply weapons and personnel to the conflict parties in spite of their commitments not to. However, this new cycle of escalation has only solidified the military stalemate, at increasing cost to both sides. The Berlin Process offers the parties an off-ramp from this destructive cycle. We believe it is in their interest (not to mention the interest of the Libyan people) to take this off-ramp sooner rather than later. At our meeting in Munich, we will work to keep this option open.

None of this is easy, and success is far from guaranteed. But we are convinced that a steady hand can make a difference in an unsteady world. Our untiring efforts will ensure that the future will not be a “Westless” one. 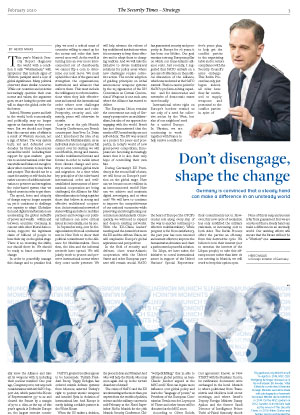