Europe must deliver on the issues people care about 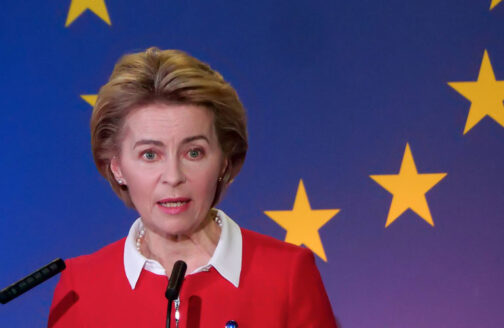 The more European leaders talk about developing a “geopolitical commission,” the further they are from getting there. In the months since Ursula von der Leyen stated this as her goal, actors within each of the EU pillars of decision-making seem to have taken a step backward.

The Iran nuclear deal, which was already in intensive care, is now taking its last breaths. While Europeans have tried to uphold it through extraordinary efforts, they are struggling in the face of US President Donald Trump’s sanctions and diplomacy. In Libya, freewheeling players like Turkey and Russia are having more impact than France and Germany. And even when it comes to climate issues, in spite of the Green New Deal that has been touted as Europe’s key priority, Europeans will struggle to shape the global agenda at the climate change summit in Edinburgh – that is, if they manage to come to agreement even among themselves. In the Balkans and parts of Eastern Europe, although Europeans offer the biggest market, visas and aid, they are increasingly taken for granted – as we saw in Volodymyr Zelensky’s leaked conversations with the White House.

None of this means that von der Leyen was wrong to target this goal, but it does mean that she needs to be willing to help Europeans act differently if she wants her slogan to be anything more than the butt of jokes in the White House and the Kremlin.

First, Europeans must be willing to play hardball rather than lead by example. In today’s world, it is the rogue actors who have the most influence. On climate, it is the big emitters who set the pace for diplomacy and convert their bad behavior into subsidies. In the Middle East, it is the escalatory policies pursued by Russia in Syria and by Turkey in Libya that are rewarded. And in the Balkans and Eastern Europe, Russia is an important player because it is willing to offer benefits and to take them away.

The EU wants to move toward a rules-based world where people behave constructively. But sometimes you need to be tough in order to disincentivize bad behavior. For example, the EU is willing to introduce tariffs on Harley Davidsons and bourbon as part of an effort to stop the US from introducing tariffs on European steel. That is not because Europeans want protectionism but because they realize that opening up other people’s markets means a willingness to deter bad behavior.

This mix of sticks and carrots has yet to be developed as a response to US secondary sanctions. And it is also not common in our relations with our neighbors. In the Balkans, Ukraine and Libya, Europeans spend much more effort and resources than Russia, Turkey or the United States. But since Europeans are not willing to take any of the benefits away, Russia can easily acquire a clout with a minimalist approach.

We need to rewire Brussels to develop a habit of thinking strategically and to build strategic sovereignty by placing trade, economic and competition policy in the service of geopolitical goals. This includes fostering a greater international role for the euro and pushing back against secondary sanctions. It could involve establishing a European investment screening system and a new European competition policy as well as stricter control of state aid granted to foreign competitors. It will mean fortifying the European pillar in NATO with concrete critical capabilities so that the EU can be a better partner to the US as well as developing a pan-European capacity to respond to cyber-attacks. Finally, the EU must hedge against blockage of international institutions such as the WTO and allow Europe’s institutions, such as the European Investment Bank and the European Stability Mechanism, to engage outside the EU beyond their current mandates.

But the problem is not just that the EU’s institutions are set up in a way that fragments power between different levels and makes it impossible to combine economic instruments and geopolitical strategy. A number of member states have recently taken to blocking EU decision-making as a way of courting favor with third powers. Hungary, Greece and Slovenia, for example, have blocked or diluted resolutions challenging China on the issues of the South China Sea and human rights.

The long-term challenge is to build a form of de facto solidarity by showing that the EU is the first line of defense for many countries’ core interests. The President of the European Council Charles Michel and the new High Representative of the Union for Foreign Affairs and Security Policy Josep Borrell should seek to broker a new grand bargain within the European Council that will define the core European approach to key global issues, including climate change, cybersecurity and human rights. It should also describe how the EU should relate to other great powers like China, Russia and the US, as well as in key areas such as Ukraine, the Balkans and Africa.

A European Security Council could be a powerful tool for having a strategic discussion, engaging the UK and allowing the willing and able to make progress. Another way to facilitate the reconciliation of different positions would be to then appoint core groups of member states to work through divisive issues in an attempt to develop options and joint positions above the lowest common denominator.

The EU has the largest market in the world, the second-highest defense spending (after the US), 55,000 diplomats and the world’s largest development-assistance budget. There is an enormous opportunity to make the EU more fit for purpose in a geopolitical world and to demonstrate that the EU can deliver on the issues that its member states and its population truly care about.

MARK LEONARD
is founder and director of the European Council on Foreign Relations. 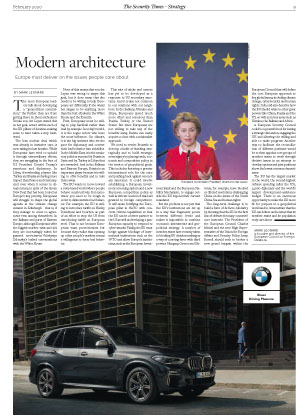