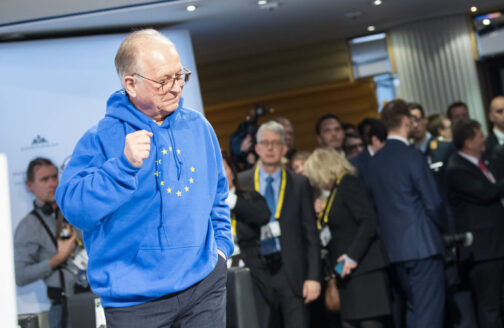 What are Europeans willing and able to do in order to secure their wider neighborhood? This question is by no means new. But with instability growing and the US footprint shrinking in Europe’s southern periphery, the question regularly returns – and each time with greater force.

Encouragingly, it looks as if Europeans are no longer evading the security question. Moreover, by hosting peace talks in Berlin, the German government – in a concerted effort with other capitals – made a courageous attempt to end one of the most worrisome military escalations at Europe’s periphery: the war in Libya.

The German government, together with other European countries, succeeded in hosting Libya’s chief conflict parties as well as their many foreign backers. The summit secured, at least on paper, all relevant actors’ commitment to respect the international arms embargo, work toward a permanent cease-fire, and revive the UN-sponsored political process.

This is no small achievement. By pushing for this outcome, Europeans demonstrated that they finally understand that if they don’t try to bring peace and stability to Libya, no one else will. If they want to see an end to a conflict with massive effects on European security interests, they themselves must bring it about.

Forging the Berlin agreement was the easiest part. What comes next will be much more challenging. In Libya, Europe’s resolve to become a geopolitical actor will face its first significant test, while Germany can finally demonstrate how it seeks to implement its oft-heard pledge to take on a greater international role.

First, what has worked well for a considerable amount of time, namely outsourcing to the US the task of stabilizing Europe’s neighborhood, is no longer a viable option. Washington is tired of engaging in far-away conflicts that may strongly affect its European partners yet have few – if any – ripple effects on US citizens.

Second, where the West fails to engage, other powers are increasingly willing and eager to jump in. The goals they pursue, however, are often at odds with European interests. In fact, ceding leverage to other powers rarely gives rise to the kind of environment that Europe desires, one based on peace, prosperity and stability.

And third, while Europeans may have come around to recognizing the need for a considerably more active European foreign and security policy – a policy of jointly engaging in the conflicts and crises that affect them – this realization comes at the worst possible time. It comes at a time when the EU is subject to unprecedented centrifugal forces. Ironically, these same forces have been stifled – and continue to be stifled – by conflicts like the one in Libya. After all, it is hard to disentangle the Libyan civil war from the migration crisis that hit Europe in 2015 and provoked a significant rise in populist anti-EU sentiment.

This leads straight to the question of what Europe can do to secure its surroundings. What can it do to help stabilize Libya? The agreement reached in Berlin will not suffice. It must also be enforced. A potential cease-fire must be monitored while violations to the arms embargo must be sanctioned.

And most importantly: How can the warring parties be motivated to agree to a verifiable cease-fire?

This is where it behooves German and EU diplomacy to remember the hard lessons learned in Bosnia in 1995: A meaningful cease-fire or peace arrangement can only be achieved if and when all parties to a military conflict understand that the road to military victory is definitively closed. Absent the threat of military enforcement measures, the parties involved are unlikely to sign on to a political process and abandon the goal of military and political victory.

In Bosnia and Kosovo, the US stepped in and convinced Slobodan Milošević to engage in peace talks. This time, it’s Europe’s turn.

For Germany and other EU countries, these are very difficult questions. On the one hand, military measures or enforcement measures mandated by the UN, as rightly considered by the EU’s chief diplomat, will likely have to be part of the mix – although when asked about the possible need to deploy their military, German politicians quickly stepped on the brakes. On the other hand, Europeans must not be naïve: Whatever the contours of their engagement in Libya, Europe must prepare for the long haul. Almost 20 years in Afghanistan and even more in Kosovo have hammered this point home.

Either way, Europeans cannot avoid taking action. Whether in the form of migration, terrorism or transnational organized crime, instability at Europe’s doorstep is sure to wreak havoc at home.

European attempts to contain these troubles and hold conflicts at bay have regularly produced considerable human suffering – the Libyan detention camps are dreadful proof of this fact. At the conference in Berlin, Germany and its European partners signaled that they have awoken to the changing tides. The next few weeks – including the debates at the Munich Security Conference – will give a first indication of whether Europeans are able to translate this realization into action. Tough decisions lie ahead.

WOLFGANG ISCHINGER
is chair of the Munich Security Conference and professor for international security and diplomatic practice at the Hertie School of Governance in Berlin.