It is not often that something leaves Turkish President Recep Tayyip Erdoğan speechless. Yet following his visit to Moscow in late January, Erdoğan needed several days to return to his old rhetorical form. His meeting with the Kremlin leadership was the latest in a series of talks on resolving the drama in northern Syria. US President Donald Trump’s surprise announcement on Dec. 19 that he would pull out all 2,000 US troops from the war-wracked country has reshuffled the cards. When the Americans leave, there can be no more doubt that Syria’s fate will be decided in Moscow. Iran, meanwhile, is cementing its position, while the Kurds suddenly face an existential threat.

After returning from Russia, Erdoğan said Turkey was ready to “unilaterally establish a safe zone in northern Syria if one does not emerge in the next few months,” because his country “cannot wait forever.” This was just a windy admission of defeat. Since November, Erdoğan had been announcing an “attack within the coming days.” In January, he said a 30-km buffer zone along the Turkish border in Syria’s Kurdish region would be set up “soon.”

Erdoğan wants to continue the interventionist policy he launched in Syria in 2016 to prevent the formation of a contiguous Kurdish state on Turkey’s southern border. He fears that such a Kurdish republic could pose a threat to Turkey. Now that Ankara already maintains two protectorates in Syria, it also has its sights set on the province of Manbij, west of the Euphrates, which is currently under Kurdish-Arab administration, as well as the autonomous Kurdish cantons beyond the river’s eastern bank.

The Syrian Kurds currently control about a third of Syria. Although no clearly documented attacks against Turkey have been launched from this territory, it is also true that the area’s ruling PYD and its 30,000-strong People’s Defense Units (YPG) are offshoots of the banned Kurdistan Workers’ Party, the PKK, which has been fighting against the Turkish state for 35 years. While Turkey makes no distinction between the three groups, calling them all terrorists, the US also lists the PKK as a terrorist organization yet has fought alongside the PYD and YPG against the jihadist militia Islamic State. In an alliance with the Syrian Democratic Forces (SDF) and with US air support, the Kurds have largely routed the Islamic State.

Trump used this successful campaign as the occasion to prematurely proclaim victory against IS and announce the US withdrawal, thereby keeping a campaign promise and relieving Washington of its strategic dilemma of having to choose between the YPG and Turkey. The result was an immediate destabilization of northern Syria. The Kurds, who were relying on US protection from Turkey at least in the medium term, sensed betrayal, even though Trump later revised his stance, saying the pullout would take place “over a period of time” and that he would protect the Kurds, even though no one knows how he intends to do so.

Feeling triumphant, Erdoğan euphorically proclaimed his anti-Kurdish offensive, which would begin against Manbij. The Kurds, however, responded immediately. Facing the two bad options of either a Turkish offensive or a deal with Syrian President Bashar al-Assad, they chose the latter. They called on Damascus for help against the Turks and began fresh talks over their future status in a unified Syria.

The tactic worked. To prevent a Turkish intervention, Syrian government troops and Russian units entered Manbij in December and began joint patrols with the YPG. Russian President Vladimir Putin, who wants to keep Turkey’s power in check, is now pressuring Damascus to come to terms with the Kurds. In so doing, the Kremlin has conclusively become the dominant external actor in the Syrian theater – and its protégé Assad the biggest winner. With Russian and Iranian help, his forces have reconquered about two-thirds of Syria’s territory, but the north and northeast remained mostly beyond Assad’s reach. That will now probably change.

For Erdoğan, however, there was no green light from the Kremlin at the Moscow summit, unlike last year regarding Afrin. Moscow insists that a buffer zone could only be negotiated with the Syrian government, “because ultimately the necessity that the Syrian government reclaims control over its entire territory, including the zone, is clear to all,” said Russian Foreign Minister Sergey Lavrov. Putin offered Erdoğan a face-saving measure in the form of the 1998 Adana Agreement between Syria and Turkey, in which both countries agreed to cooperate on security matters. Yet by pledging to uphold Adana, Erdoğan was in fact following Russia’s demand that he once again cooperate with Assad officially – something Erdoğan had, until then, always vehemently rejected.

And the Turkish president has a second problem. In Idlib, the last of the rebel-controlled provinces in Syria, Turkey is unwilling or unable to disarm the Al Qaedaaffiliated HTS militia, despite Ankara’s pledges to the Russians. The jihadists now control nearly the entire Idlib enclave. Putin is angry – military action against the rebels, probably sending new waves of refugees across Turkey’s borders, will now be harder to avoid.

Erdoğan’s triumph has turned into defeat. The clear winners of the US pullout from Syria, meanwhile, are Assad, Iran and Russia, which continues to inch closer to its goal of a Shi’ite land bridge to the Mediterranean. The question now is whether Russia has taken on a bigger load than it can handle.

FRANK NORDHAUSEN
is the eastern Mediterranean correspondent for the dailies Berliner Zeitung and Frankfurter Rundschau. 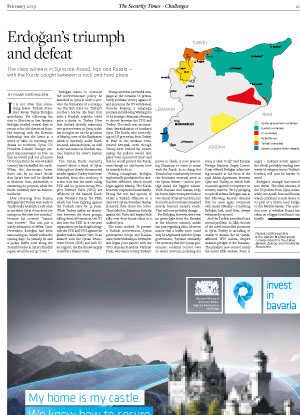