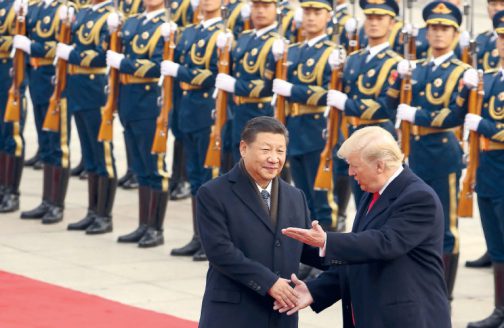 When Donald Trump became US president on Jan. 20, 2017, the world could and should have seen a downturn in Sino-American relations. During his election campaign, Trump had criticized China fiercely: “We can’t continue to allow China to rape our country, and that’s what they are doing.” He also declared he would “label China a currency manipulator.”

A year later, in January 2018, it is remarkable how stable the US-China relationship has become. What happened? Did Trump change? Or did China adapt? Did events intervene? Did North Korea help or hurt?

The real story is a complex one. Just as the ancient Chinese emperors perfected the art of “barbarian” management, the current Chinese leaders have learned the art of “America” management. They know that American presidential candidates must criticize China in election campaigns. President Bill Clinton threatened in 1992 that he would never “mollycoddle the butchers of Beijing.” But just a year later, at the APEC Economic Leaders’ Meeting in November 1993, I personally saw Bill Clinton “mollycoddle” President Jiang Zemin. It was an amazing sight.

This is why despite Trump’s election campaign and his subsequent provocations – e.g. accepting a congratulatory call from Taiwan – China decided to take the initiative to stabilize the US-China relationship by sending President Xi Jinping to call on Donald Trump at Mar-a-Lago in April 2017. Given Trump’s mercurial personality, the meeting could have gone badly. Instead, it went well.

Curiously, the issue of North Korea may have helped. North Korea carried out provocative nuclear tests and missile launches throughout 2016 and 2017. In theory, as China is seen as an ally of North Korea, these tests should have driven a wedge between China and the US. Instead, it managed to highlight the countries’ common interest in preventing nuclear proliferation and maintaining stability in Northeast Asia. In an interview with the Wall Street Journal, Trump made a candid admission: “After listening for ten minutes [to Xi who explained the history of China and Korea], I realized it’s not so easy. I felt pretty strongly that they had a tremendous power over North Korea. But it’s not what you would think.” This is why both Trump and Xi Jinping announced in Florida that they would cooperate on North Korea.

Nevertheless, North Korea’s provocations continued, and each time America promised retaliation. Trump tweeted: “Military solutions are now fully in place, locked and loaded, should North Korea act unwisely.” US Ambassador to the UN Nikki Haley was equally threatening: “If war comes, make no mistake, the North Korean regime will be utterly destroyed.” By the end of 2017, we should have seen conflict break out in North Korea, but peace held. Both the US and China had done their calculations and decided that the cost of war would be too high; it has been estimated that one million residents of Seoul could die from a North Korean artillery barrage on day one of the conflict.

An even more dangerous standoff emerged between China and India when China sent in construction teams to extend an existing road in Doklam, a disputed border area between China and Bhutan. India’s immediate reaction was to send in military reinforcements. For several weeks, Chinese and Indian soldiers were locked in a perilous eyeball-to-eyeball standoff. This, too, could have erupted in conflict. Ultimately, China blinked. Both sides agreed to return to status quo ante. India wisely decided not to crow about its victory.

A clear pattern has thus emerged in the way China manages the challenges and problems on its borders. It will stand firm where its fundamental interests are involved. However, it is also ready to make pragmatic adjustments to dial down the temperature on any potential bilateral dispute. For example, while the level of trust between China and Japan – two key regional rivals – has not improved, the relationship has assumed a certain calm and stability.

And why is China being pragmatic in the short term? The answer is simple. Chinese leaders, unlike Western leaders, think in the long term. They know time is on their side. China’s economy will become much bigger within a decade, and it is shrewd enough to know that both its neighbors and the world will make careful, pragmatic alterations to adjust to a world where China becomes number one.

The only country that could potentially derail China’s emergence is still the US, which is another key reason why China is so careful and pragmatic with its neighbors. Each regional dispute presents the US with an opportunity to step in and stir the waters. This was on full display in the South China Sea. Despite its own reluctance to submit to international arbitration, the US strongly supported the judgment of the international tribunal at the Permanent Court of Arbitration (PCA) in The Hague when it opined on the China-Philippines dispute. In July 2016, State Department Spokesman John Kirby offered: “It is both our hope and our expectation that China will abide by its legally binding obligations under this decision. The world is watching to see if China is really the global power it professes itself to be, and the responsible power that it professes itself to be.” In September 2016, President Barack Obama told the ASEAN leaders in Laos that “the landmark arbitration ruling in July, which is binding, helped to clarify maritime rights in the region.” By defusing tensions with its neighbors, China is denying the US opportunities to intervene in the region.

China’s long-term strategy of managing its rise to becoming the number one power can be described with just a few key brushstrokes.

First: Be patient; time is on our side.

Second: Maintain stability in the US-China relationship, where – paradoxically – Trump’s unpredictability has helped China. By walking away from the Iran deal and TPP, recognizing Jerusalem as the capital of Israel and courting public squabbles with the prime ministers of key allies like the UK and Australia, Trump repeatedly makes clear that China is a more predictable partner. Consequently, the election of Trump may prove a useful trump card for China. Nevertheless, China remains acutely aware that it must maintain a calm and stable relationship between Trump and Xi Jinping, and so far it has played a winning hand.

Third: On the positive side of the ledger, China is significantly increasing the interdependence between China and its neighbors through the Belt and Road Initiative (BRI). China is already the number one trading partner of most of its neighbors, including Mongolia, North Korea, Pakistan, Laos and Vietnam. It could also emerge as the biggest investor in the BRI partner countries. Over time, the links between China and its “near abroad” will only become stronger. Already, 85 percent of inward and 33 percent of outward BRI investment goes through Singapore.

It will not all be a smooth sailing. Growing interdependence can create challenges. After the Chinese built the Hambantota port in Sri Lanka, debt payments became too onerous for the Sri Lankan government, which wisely decided to hand over the port to Chinese firms on a 99-year lease. Other big infrastructure projects could create similar bilateral issues. However, if Chinese leaders continue their pragmatic approach, all these issues and challenges should also be managed with deftness.

Over time, China’s emergence as the world’s leading economy and power will become an undeniable reality. The big question is whether the rest of the world will prove as pragmatic as China. Most of China’s neighbors have already adapted to its pragmatism. As a result, East Asia is likely to remain calm, even as several bilateral issues and tensions simmer away under the surface.

KISHORE MAHBUBANI
is professor in the Practice of Public Policy at the National University of Singapore. He is the author of Has the West Lost it? A Provocation (Penguin, 2018). 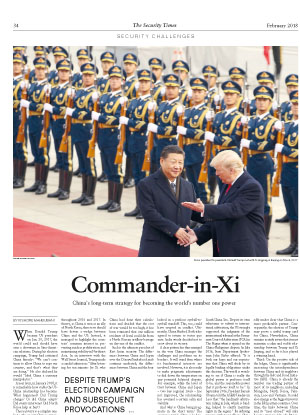