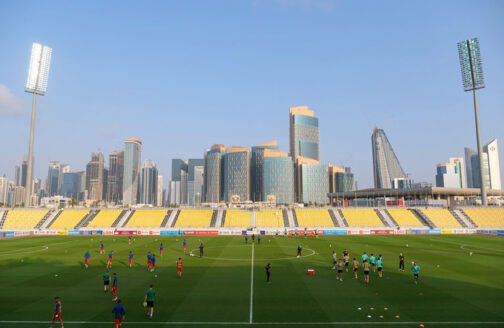 Americaʼs turn to Asia leads to new partnerships among the Gulf States.

The abrupt withdrawal of American troops from Afghanistan and the end of the mission in Iraq manifests a process that is clearly leaving its mark. The US “Pivot to Asia” strategy, initiated under President Barack Obama, shifts more responsibility to the Gulf States for security in the region. While these states have responded positively, will this strategy work with zero US involvement? Together with Europe, the US should remain engaged in the region and avoid a vacuum filled by adversaries.

The American geopolitical shift towards Asia has caused the Gulf States to rethink their strategic positions. They have intensified efforts to improve their relations with old (arch)rivals. This strategic review has led to surprising tectonic shifts in foreign policy in the Middle East region in recent months, yet with positive implications for stability in the Gulf. For example, Saudi Arabia, together with the United Arab Emirates, Bahrain and Egypt, had isolated and imposed a trade embargo on Qatar to force it to renounce its support for Islamist forces. But after some lively diplomatic exchange, heads of state of Saudi Arabia and Qatar declared their willingness to intensify bilateral cooperation and strengthen security and stability in the region.

The troubled region has been a source of concern for decades and, dependent ultimately on an American security umbrella, is beginning to organize itself. However, after the signing of the Abraham Agreement, diplomatic channels between Israel and the United Arab Emirates opened with surprising speed, while concrete opportunities for cooperation in agriculture, food security, cutting-edge technology, health and renewable energy appeared within reach.

The tiny emirate of Qatar, which is smaller than Connecticut, is situated along the conflict line between Saudi Arabia and Iran. As a result, it has loomed particularly large in its new role of fostering good neighborly relations.

Qatar has the world’s third-largest natural gas reserves and the highest per capita income globally. It now focuses on dialogue as an alternative to wars and on the option of mediation in resolving conflicts. Qatar recently demonstrated its willingness to help defuse the Afghanistan evacuation crisis last summer, when it emerged as a “hub for dialogue and the peaceful settlement of disputes.” New foreign and domestic policy paradigms recently formulated by the Qatari emir emphasize this conflict-defusing role. That role should be a reason for the US, with Europe, to remain engaged in the region. For Washington in particular, Qatar is increasingly a helpful partner as a diplomatic mediator at a time when US priorities lie more in Asia. In addition to its diplomatic role, at al Udeid, the emirate hosts one of the largest American airbases outside the US. Furthermore, with his new regional diplomacy policies, the Qatari emir can offer more substantial support for continuing US and European efforts toward an active reshaping of security in the region.

Qatar and the US established diplomatic relations as early as 1972. Together they have carefully expanded the partnership to include economic, scientific and political ties. Cooperation between universities in the two countries – there are hundreds of Qatari students in America and branches of six US universities in Qatar – has created an extensive people-to-people network; this provides crucial mutual understanding and space for collaboration. The economies of Qatar and other Gulf States are currently undergoing a profound and sustainable transformation towards a modern, high-tech industrial knowledge-based society. The ongoing generational shift is also setting in motion a social transformation against the backdrop of an overwhelmingly young and well-educated population. Qatar can harness this generational change for deeper cooperation with the US.

However, with the World Cup planned to be held in Qatar, the Gulf state once again finds itself in the spotlight. FIFA’s decision to hold the championship in the emirate in autumn 2022 remains highly controversial. Qatar should take the accusations of human rights abuses seriously and continue to work on improving the situation in the country to ensure that it retains its new and hard-earned strategic role. A boycott of the World Cup, which has been called for in Europe in particular, conflicts with European interests in regional stability. Punishing Qatar or negotiating agreements: Which would be in the best interest of improving the human rights conditions in the emirate? Sustaining the dynamically changing geopolitics in the region puts the West in bind. A boycott risks abruptly halting social and political change in Qatar and the region and jeopardizes hard-won foreign policy ties. The adage that “sport unites” seems to be wise counsel. Negotiating around sports is an opportunity to boost the region’s positive social and political developments by deploying the best weapon for regional change: the soft power of the West.

US and European interests are best served by supporting social change to ensure long-term strategic cooperation with partners in the Gulf region, which is sure to further consolidate and expand well-developed trade relations. In the Ukraine conflict, too, Europe cannot ignore that its interests lie also in Qatar as a significant exporter of natural gas. The emirate can quickly step in with gas supplies if Russia uses its gas as political leverage and continues to curb its supplies to Europe. A model for such a backup rescue operation already exists: Eleven years ago, Qatar sent its gas tankers to Japan to mitigate energy shortfalls from the tsunami.

The US remains a leading nation. Especially in such a rapidly changing world, it must remain an influential partner with Europe. The goal of the trans-Atlantic partnership can find purchase amid the swift transformations experienced in the Gulf States – a region ever more susceptible to confrontations with adversaries such as Russia and China.

The time is ripe for the US, together with its European and Gulf partners, to fill the power vacuum in the Persian Gulf and pursue a pragmatic foreign policy that corresponds to today’s geopolitical realities and helps further defuse the complex conflicts in the Middle East. As a close partner of Washington and Europe, Qatar can be a bridge and platform for a continuing US security presence in the region. In relying on partners like Qatar and its neighbors in the Gulf, the West can prevent the vacuum from being filled by adversaries in the Arab world.

James Bindenagel is a former US Ambassador and the founding Henry Kissinger Professor at Bonn University. He has published widely on international security issues in the 21st century and currently teaches strategic foresight. His most recent book is titled Germany from Peace to Power? Can Germany lead without dominating? 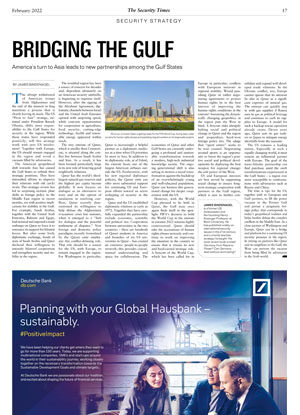