To date, the best thing we can say about the arms control agreement known as the Open Skies Treaty (OST) is that it’s not dead yet.

There have been reports, however, that US President Donald Trump raised the prospect of withdrawing from the OST in a memorandum issued in October 2019. Of course, that was also the year that Trump pulled out of the Cold War-era deal known as the Intermediate Range Nuclear Forces Treaty (INF), which banned land-based, short and medium-range missiles. The nuclear arms reduction treaty known as New START, which is up for renewal next year, is also facing the same fate.

The Open Skies Treaty was signed in 1992, entered into force in 2002 and now has a total of 34 members, including Russia. These states all agreed to have unarmed aerial surveillance flights carried out over their territories – a type of “legal espionage” of military facilities between Vancouver and Vladivostok designed to foster transparency and trust among the participating countries. More than 1,500 such flights have been carried out to date. The unique characteristic of the treaty is that pilots from both the surveilling and surveilled countries fly together.

However, buddy-buddy sorties such as these could soon come to an end. The US government has threatened to pull out of the OST, arguing that Russia is restricting observation flights over Kaliningrad and refusing to allow flights on the border with Abkhazia and South Ossetia. In return, the United States has restricted flights over military facilities, for example over missile defense systems in Alaska and Hawaii, where its Pacific fleet is located.

According to media reports, the foreign ministers of France, Germany and the UK have warned their US counterpart, Secretary of State Mike Pompeo, of actually pulling out of the treaty. Berlin’s Foreign Ministry stated that the OST was “one of the last functioning mechanisms for generating trust between Europe and Russia.” They also argued that OST was of key importance considering the already severely compromised security architecture in the world today.

There are reasons cited why the US wants to terminate the OST treaty. The two aircraft used by the US Air Force are “decades old and need to be replaced,” Peter Brookes, former deputy assistant secretary of defense and senior fellow at the Heritage Foundation, wrote in The National Interest. Brookes also noted that the onboard sensor suite needed upgrading, which would involve costs of around $200 million. Some would argue that that’s a lot of money to spend on images that could be obtained by other means, such as using state-of-the-art US satellite systems.

Despite these misgivings, Brookes also provides a counterargument, noting that “indeed, with a number of security challenges worldwide, there are limits on the availability of US military satellite coverage.” He goes on to say that a number of US allies and partners “value US participation in the OST for other reasons, including maintaining strong trans-Atlantic ties and as a symbol of the US commitment to peace and security in Europe during a period of Russian belligerence and aggression.”

The good news is that even though Trump has the power to withdraw from the treaty without Congressional approval, during negotiations on the defense budget in December 2019, Congress was able to insist that the Defense Department and State Department would first have to prove that leaving the OST was in the interest of the United States. 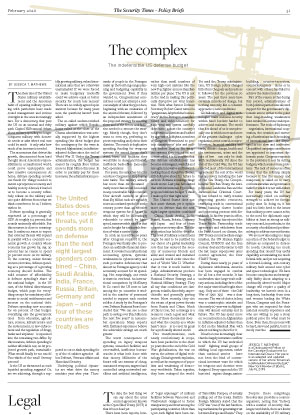