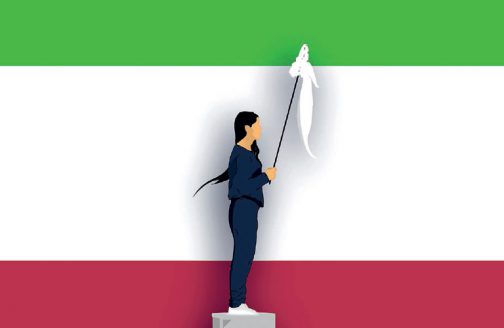 The violent unrest in many Iranian cities took officials and foreign observers by surprise. It stemmed from the pent-up frustration of regular people in the provinces over unemployment, price hikes and corruption, while the world focused more on Iran’s increasing regional might and the uncertain state of the nuclear deal.

The relative calm inside the country has given way to a domestic quarrel over how to respond to the hitherto unknown outburst of anti-regime sentiment among ordinary people, who are generally considered the Islamic Republic’s conservative bulwark. Today, almost 40 years after the 1979 Revolution, is a watershed moment for both politics in Tehran and transatlantic policy towards Iran.

As it turned out, rather than killing the 2015 nuclear deal outright, a reluctant President Donald Trump threw it another lifeline by again suspending important US sanctions for another 120 days. However, in the same breath he handed his European allies an ultimatum: Work with him to confront Iran’s “malign activities” by cutting off funding to the Islamic Revolutionary Guard Corps, designating the Lebanese Hezbollah as a terrorist organization and constraining Iran’s development and proliferation of missiles – which in his eyes would “fix the terrible flaws of the Iran nuclear deal” – or he will withdraw the US from the deal when the next sanctions waiver is due in mid-May.

Trump’s early tweets in support of the Iranian demonstrators (“Time for change”) led some to believe he would use the street protests as a justification for the immediate termination of sanctions relief. He had forged an Arab-Israeli-American coalition against Iran during his first trip abroad in May 2017. In this he declared Tehran, alongside Pyongyang, to be one of the two main threats to the US National Security Strategy adopted in mid- December 2017. There is little doubt that he wishes to be the president “overseeing” regime change in Iran, even if it were not orchestrated by Washington but by “the great Iranian people” (Trump on Twitter).

Yet Trump has held back for now, if only – and this is the second point – to issue a stern ultimatum to America’s allies to change course. The Europeans are adamant to preserve the nuclear deal precisely for its ability to block Iran’s path to the bomb – an analysis they share with the Russians and Chinese as well as with the majority of international experts. While they have concerns over the country’s regional policy, they see Tehran as a key player in the Middle East that must be engaged rather than isolated. The EU thus aims to open the country through economic exchanges and to involve it in regional conflict resolution.

However, America’s persistent questioning of the deal has already undermined the position of the West (i.e. France, Germany, the United Kingdom, the EU and the United States) vis-à-vis the other signatories (China, Russia and Iran itself). Trump purposefully conflates the deal’s core bargain – roughly speaking, a substantive rollback and continuous inspection of Iran’s nuclear program in return for the lifting of international economic sanctions – with Tehran’s growing regional power projection. His argument is that the former has enabled the latter. Yet the opposite is actually true: The deal, which Teheran has thus far strictly observed according to the International Atomic Energy Agency (IAEA) entrusted with overseeing the agreement, has at least reduced the nuclear threat.

A US withdrawal from the deal would not only reopen the nuclear issue, but also give hardliners in Iran a welcome reason to put down domestic dissent. The credibility of international diplomacy would be severely undermined, with consequences for other hotspots such as North Korea and America’s global rivalry with China and Russia.

As the nuclear deal’s lead negotiator, what can the EU do now? The Europeans have thus far been looking for a way to stop Washington from withdrawing and not to jeopardize their developing relations with Iran. This was a difficult diplomatic feat even before the recent unrest and Trump’s four-month ultimatum. The US has now added insult to injury. The measures demanded from the Europeans would not only render even a limited partnership with the Iranians impossible, they would also violate explicit provisions of the agreement.

To avoid risking further transatlantic alienation at a time of global insecurity, the Europeans will seek a face-saving compromise. A solution could evolve around stricter EU measures against Iranian missiles in return for a US reaffirmation of the 2015 deal. Yet the EU can never be certain whether Trump is open to a way out of the impasse. More than ever US, Iran policy is based on Washington politics, not on questions of transatlantic partnership or even the facts on the ground in Iran.

Far beyond the questions of nuclear proliferation, regional security and human rights, the dispute over the correct approach to Iran is a palpable – and rather frightening – symptom of traditional allies drifting apart.

CORNELIUS ADEBAHR
is an independent political analyst and consultant. He is a non-resident fellow at Carnegie Europe in Brussels and an associate fellow of the German Council on Foreign Relations in Berlin. He is the author of Europe and Iran: The Nuclear Deal and Beyond (2017). 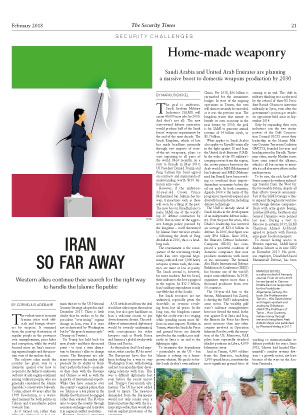