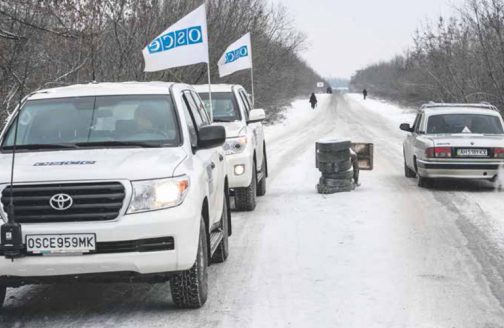 Wherever we look, we see wars and armed conflicts: Syria, Yemen, Libya, Iraq, Afghanistan, Eastern Ukraine. We have witnessed violations of international law, burgeoning isolationism and looming trade wars. We are confronted with flows of migrants that are increasingly difficult to control. Radicalization, fanaticism and violent terrorist acts have struck at the heart of our society.

On the one hand, hacker attacks, shitstorms, hate speech and social brutality are increasingly becoming part of our everyday lives, in the analog and digital worlds. On the other hand, fear, mistrust, demoralization, loss of control and the credibility problems of leaders are all growing.

This instability will not fail to take its toll on the Euro-Atlantic and Eurasian realm – from Vancouver to Munich, Vienna and Vladivostok. The saber rattling, threats, menaces and conflicts that my generation has only known from history books are emerging again.

Putative perceptions, subjective truths, feverish speculation and “fake news” – these phenomena only add fuel to the fire. If we are to resolutely counteract these developments, we must return to trust and responsibility. This is as true of more minor challenges as it is of those at the global level. It is clear to me that Austria, a reliable partner in the international community of nations, will contribute strongly to shouldering this political responsibility. For this reason we have wholeheartedly embraced the opportunity to chair the Organization for Security and Co-operation in Europe (OSCE) in 2017.

The era in which the OSCE was regarded as a “Sleeping Beauty” is over. Given the herculean tasks facing us all, it offers an ideal forum for (re-)creating a peaceful order based on shared values and commitments. It offers a platform for an honest dialogue between East and West, North and South. In doing so it must not give the impression that it is papering over different perspectives, points of view and narratives.

We support this OSCE “renaissance” in the strongest possible terms and in close cooperation with our German and Italian friends with whom we share the current leadership troika. Anchoring a strengthened OSCE as the foundation for a pan-European security architecture will provide long-term benefit to Europe and beyond.

Austria is a neutral state held in high regard for its bridge-building foreign policy. This year we have set ourselves the goal of focusing our OSCE chairmanship on defusing armed conflicts in the OSCE realm, sustainably rebuilding mutual trust and combating radicalization and violent extremism.

I am under no illusions. There are no patent remedies for these situations; an ideal solution is still a long way off. But nor am I disillusioned. We can, step by step, work on pragmatic and concrete measures that provide us with progress in securing the broader common good. To achieve this, we must use every channel of communication available to us – parliamentarians, civil society, scientists, those in business and industry, and our young people as much as our government representatives.

We all have to take responsibility and live up to it. That will be key in rebuilding security and making our European way of life fit for the 21st century.

Many people in our countries are worried, which is also greatly influencing political discourse on the ongoing burdens and threats to internal security from external factors.

Without a doubt, the refugee and migration crisis is one such factor. It is a challenge for the social and integration systems, the labor market as well as the security and judicial authorities in many countries. Citizens, not without reason, have the impression that their governments have lost some control over people entering their territories. The dividing line between the legitimate search for protection from persecution and the quest for a better life is becoming increasingly blurred.

In the past year we have successfully worked to progressively counteract this overload. The closing of the West Balkan route together with countries along the route has helped to greatly reduce the flow of illegal migrants across the Aegean, through Greece and on to central Europe. However, it would be wrong to think that the pressure on Europe from flows of migrants will decrease. The flow across the perilous central Mediterranean route has again massively increased, with around 181,000 arrivals last year in Italy. According to prognoses, Africa’s population will double to 2.4 billion by 2050, and reach 4 billion by the end of the century.

Thus, the policy of just waving people on to central Europe must end. We must find sustainable solutions for Europe. It should no longer be left to human traffickers to decide who makes it to Europe. At the same time, we must finally put an end to the deaths in the Mediterranean. We need effective solutions we can implement with our own means. In this regard we can learn from countries that have succeeded in finding similar solutions, such as Australia and Spain.

This is about properly securing the EU’s external borders and stopping illegal migration, about helping people who need prospects in their own countries, and about implementing resettlement programs to specifically bring the weakest of the weak – in numbers we can cope with – to Europe from their countries of origin. In doing so, we must heed our societies’ capabilities to absorb newcomers. The goal is not to seal ourselves off, but to regain control, so that we, and not criminal human-trafficking organizations, can decide who can come to Europe.

Another factor that is increasingly undermining both our objective internal security as well as people’s subjective feeling of safety is the threat of terrorism. For too long we believed that terrorism mainly occurred far from, apart from or perhaps only at the edge of OSCE territory. Now we know otherwise: religious fanaticism, radicalization and a propensity to commit acts of extreme violence are not phenomena that originate with individuals.

Around 10,000 people from countries that are part of the OSCE have joined the Islamic State in recent years, and gone on to rape, murder or attempt to annihilate religious minorities in Syria, Iraq and Libya. These people represent a massive security threat to our populations when they return to our countries. Our response to this must and can only be tripartite: first, more and more targeted prevention throughout our society; second, police and military measures where necessary and the imposition of penalties, while maintaining human rights and fundamental freedoms; and third, a willingness to reintegrate those who have renounced terror. The OSCE has been impressive in proving its worth as a platform for dialogue and confidence building, as well as in operative responses to current security challenges. I am reminded of the more than 1,000 members of the Special Monitoring Mission in Ukraine, whose efforts can ease the population’s suffering on the ground and make an important contribution to de-escalation, as I was able to personally witness at the beginning of our chairmanship. The OSCE offers all the instruments necessary for military inspections, election monitoring, domestic reforms and regional cooperation, to name just a few examples.

I am convinced that the OSCE can make valuable contributions to the knowledge exchange concerning our wide range of experiences, expertise and approaches to solutions in these areas – and all in the best interests of our countries, our citizens and our security.

A version of this article appeared in print in February, 2017, with the headline “No Sleeping Beauty”.