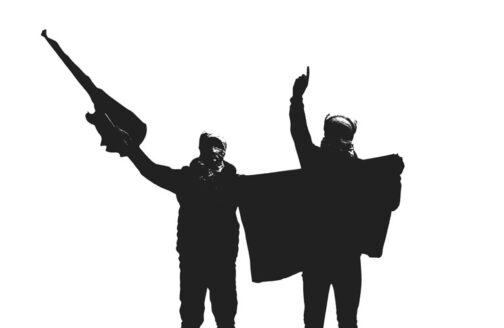 Almost a year has passed since the Battle of Baghuz Fawqani in eastern Syria, where in March of 2019 fighters of the Islamic State (IS) terrorist organization took their last stance against the Kurdish-led Syrian Democratic Forces and the US-led Global Coalition against Daesh. It was there and then that the IS “caliphate” came to an end.

Nothing remains of the pseudo-state the jihadists had set up in 2014. But at its zenith, the caliphate comprised an area the size of Austria across large parts of Syria and Iraq, with an estimated 8 million people as its – mostly – forced citizens.

It took another half year to track down and eliminate the group’s notorious leader Abu Bakr al-Baghdadi. He had overseen the merciless rule his group imposed on anyone under IS control and organized a string of brutal terror attacks against targets as far away as Paris and Brussels as well as genocidal campaigns against Yezidis, Shiites, Christians and other groups in the region. The self-styled caliph, or ruler, over all true believers died on Oct. 26, 2019, in his hide-out in Syria’s Idlib province when, to avoid capture by US special forces, he activated an explosive belt.

It is understandable that leaders across the globe hailed both the end of the jihadist wannabe-state and the demise of al-Baghdadi as victories of historic proportion. US President Donald Trump boasted that the caliphate had been defeated “100 percent.” But – unfortunately – this is true only in the narrowest sense.

To understand that the specter of IS isn’t quite over, one need simply travel to northern Iraq. At the base of the Qara Chokh mountains at the border between the areas under control of the Kurdish Regional Authority and those controlled by Iraq’s central government, a community of roughly 400 IS fighters is still holding out. The men, women and children live in tunnels and natural caves.

The fighters hide during the day, but at night they enter surrounding villages and extort food, money and what they call taxes. They also plant mines that regularly kill civilians.

The Kurdish Peshmerga Forces make sure not to penetrate these areas. The Global Coalition conducts sporadic air strikes against them. But the Iraqi army is hardly ever to be seen.

Peshmerga officers claim that dozens of Western and Asian IS fighters joined this jihadist community only after the battle of Baghouz. That means that some of the estimated 40,000 foreign fighters who had joined ISIS in its heyday survived that battle and have now taken refuge in the Qara Chokh mountains. Several such IS pockets continue to exist across northern and eastern Iraq.

In Syria, the Washington Post recently reported, former IS members have been re-recruited as recently as in June of 2019. An unknown number of underground IS cells dot the east of the country, conducting attacks, bombings and assassinations on a regular basis.

While it is true that tens of thousands of IS fighters have been killed and arrested in past years, as many as 14,000 IS fighters might still be living underground in Syria and Iraq alone.

Although they may be mostly busy with survival rather than with planning global terror attacks, they remain battle-hardened, die-hard jihadists waiting for their next opportunity to contribute to the cause.

Eliminating them is not an easy task; it may indeed prove impossible. And it certainly doesn’t help that the future terms under which the Global Coalition will be able to operate in and out of Iraq have become a lot less clear in the wake of the killing of Iranian General Qassim Soleimani and subsequent Iraqi calls to end the presence of Western military forces in the country.

The state of affairs is all the more concerning since IS – and its predecessors – know how to prevail in situations like this. Before their ascent in 2013/14, the group had almost been reduced to insignificance. The total number of fighters was in the low hundreds. IS knows how to expand when circumstances allow it. And under adverse conditions, they know how to lay low, wait and survive.

This picture becomes even gloomier when global developments are taken into account. Even though al-Baghdadi has been replaced by a successor about whom virtually nothing is known apart from his nom de guerre, Abu Ibrahim al-Qurashi, not one of the terrorist groups in the Middle East, Africa or Asia that pledged allegiance to IS in the past has terminated their affiliation. They all remain in the fold and have for the most part even renewed their pledges. In other words, the end of the caliphate does not mean their fight is over.

In fact, some of these affiliates have grown to become menaces in their own right. Jihadists in West Africa, many of them associated with IS, are considered a regional threat by intelligence analysts. In Afghanistan, at least 2,000 fighters act in the name of IS. In Libya, that number is believed to be 800, with experts fearing that each of these branches could already have acquired the ability to plot terror attacks in the West. The Philippines is home to likely as many as 750 IS fighters, while Egypt’s Sinai Peninsula is expected to have an equivalent amount.

In Egypt alone, the terrorist group claimed 180 attacks in 2018. On Easter Sunday 2019, jihadists killed over 250 people in multiple suicide bombings across Sri Lanka. The perpetrators belonged to a non-affiliated local militant Islamist group, but they chose to let IS take credit for their attacks — at a time when the caliphate was already history.

Why is it that the IS label is apparently still seen as an asset?

In order to understand this fact, we have to accept that IS adherents and sympathizers see the organization very differently from the way Western analysts do.

While it may sound counterintuitive to us, the IS and its adherents see the caliphate project as an almost unconditional success. They focus on the fact that their “state” managed to exist for four years and that it took a coalition of 81 global partners four years to defeat it. They also interpret the caliphate as a first – and by far not the last – attempt at accomplishing a vision.

They know that the experiment in all likelihood cannot be repeated any time soon. But their ideology isn’t based on the idea that success must be achieved now or soon or even in their lifetimes.

What they see instead is that the global jihadist movement has learned valuable lessons that will help them to get it right the next time around. Veterans of the caliphate will thus be influential people for years to come, as they are the bearers of this knowledge.

One of the main lessons already being implemented is that the best prospects for jihadist success exist in places where older conflicts can be exploited and re-framed as part of the global jihadist struggle. This is particularly evident in West Africa and the Sahel, where jihadists of all stripes, including IS, are branding themselves as representatives of disenfranchised and oppressed groups. They offer a merit-based system of power distribution, as well as a degree of accountability and order often unknown in these regions. In some areas, they even offer people a livelihood.

This works quite well in localities that are ungoverned or, at best, poorly governed. Analyst Shadi Hamid recently drove home this point in a Brookings Institution paper when he explained why “it matters that many people prefer cruel governance to no governance.”

This is not to say that the setbacks are not real. They are very real indeed. IS leaders are underground and most likely unable to communicate to the extent they would like. They can no longer perform their original function as an international headquarters for the movement. Moreover, the influx of volunteers from abroad that the IS previously enjoyed is a trickle of what it once was.

Their propaganda machinery has been significantly reduced. Their capacity to strike the West – traditionally a recipe to gain recruits as well as burnish their reputation – has suffered substantially. And lastly, funding has largely dried up – although it should be noted that the group may still have access to tens and perhaps hundreds of millions of dollars.

Our current world is generally a safer place with respect to jihadist terror attacks. For the moment, that is. After all, jihadist ideology dictates that one of the most highly prized virtues is patience. Jihadists tend to think in historical terms.

Analysts in the West, on the other hand, tend to envision scenarios that encompass only the next few years. For the international community, there is a certain risk to underestimating jihadists’ stamina and ability to plan long-term.

Smashing the dangerous IS state-building enterprise should not be confused with a permanent defeat of the group. The conditions that helped IS rise still exist or can return – and in more than one place.

YASSIN MUSHARBASH
is an investigative reporter and terrorism analyst for the German newsweekly Die Zeit. 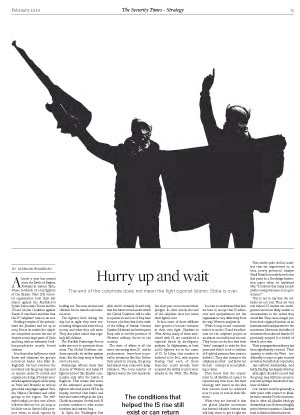