Slaying the dragon: We must re-address arms control

When you walk past the United Nations headquarters on Manhattan’s 1st Avenue, it’s hard to overlook the massive sculpture on the front lawn: a larger-than-life Saint George slaying a giant dragon. You could easily mistake it for a medieval monument, if the dragon weren’t made of fragments from Soviet SS-20 and US Pershing nuclear missiles – weapons destroyed under the INF Treaty of 1987.

For more than 30 years, the treaty was an essential building block of European security and a cornerstone of international arms control architecture. By developing a new groundbased mid-range nuclear missile, Russia has violated and de facto suspended it. The ball is in Russia’s court. During my recent visits to Moscow and Washington, I proposed criteria against which Russian transparency proposals should be tested. Regrettably, everything Russia has offered so far falls far short of those benchmarks. Six months remain for Moscow to return to full and verifiable compliance with the INF. Germany will do whatever it can to make this happen. An end to the INF Treaty would affect us all, and Europe would be less secure. Perhaps even worse, an end to the treaty would also damage the prospects for arms control in general. A new arms race looms large on the horizon, while a key lesson of international policy is undermined, namely that lasting security requires both military strength and cooperative security.

This realization is even more alarming when we look at the challenges ahead. The digital revolution offers potential for changing human lives for the better. But it also has a profound impact on tomorrow’s weapons systems, on international warfare, on domestic security and global stability. In a nutshell, the wars of the future will most likely not be fought with mega bombs, but with megabits and megabytes.

The Cold War is over. Security today is less about counting nuclear warheads than about understanding the security challenges linked to future technological developments:

5G networks, which are currently being tendered in Germany and many other countries, will fundamentally alter cyber capacities and the daily routines of household management. But how do we prevent their misuse for cyber warfare?

Biotechnology offers the potential to improve human life – from tackling genetic diseases to mitigating the impacts of climate change. But how can we ensure that access to biotechnology doesn’t enable terrorists, criminals or states to weaponize biological agents?

Artificial intelligence is set to take unmanned aerial vehicles to the skies above our cities. But how can we stop autonomous weapons from building on this technology to select and attack targets without human involvement?

New frontiers in long-distance travel will soon be pioneered by hypersonic carriers, drastically cutting travel times. But how can we deal with hypersonic missiles that reduce reaction times to just a few seconds, thus eroding the ability for human control?

These fundamental questions remain unanswered today. To address them, I have invited colleagues, military experts and scientists to attend an international conference in Berlin on March 15 of this year. We wantto launch an international dialogue that captures technology and rethinks arms control. It will be informed by an in-depth analysis of technological trends, a clear assessment of the security landscape and an open debate between affected countries. Our European neighbors need to be at the heart of this dialogue, since Europe is particularly affected by the current arms control crisis. Defining a common European position will also be necessary, as we are including global powers such as China, India, Japan and our trans-Atlantic partners in our discussions. We will also engage with the private sector, which is pioneering many of these technological developments. Together, we must put arms control back on the international agenda.

The sculpture of Saint George and the dragon on the UN’s front lawn bears the title “Good Defeats Evil.” If we don’t take action now, we risk waking up to a world where we won’t be able to tell good from evil, or right from wrong – where high-tech weapons are used in undefined gray zones and where the choice between war and peace has slipped from human control. To avoid such a catastrophic scenario, we must take new technological challenges into account in our arms control architecture. That would be a major step towards preserving peace in the 21st century – and a manifestation of pure realpolitik.

HEIKO MAAS
is the foreign minister of Germany. 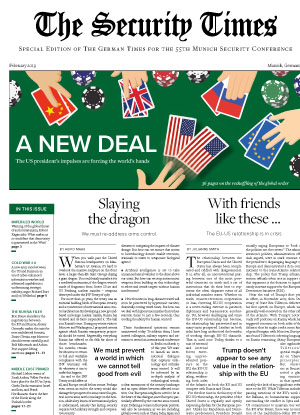