As far as the world economy is concerned, it is interlinked,” deadpanned the famous German satirist Kurt Tucholsky in the early 1930s. Although uttered in the Weimar Republic, the remark applies today as much as ever. Indeed, while some observers see President Donald Trump’s words at this year’s World Economic Forum in Davos – “America first does not mean America alone” – as a gesture of conciliation, this would be an incorrect reading. American economic policy will be part of a new global public policy that has a tangible impact on Germany as well. After Davos, there can be no doubt about this.

And yet, as unpleasant and protectionist as Trump’s “America first” slogan may sound, it is nothing we haven’t heard before. While his term – or terms – in office will be sure to drag on, his administration will not usher in the “demise of the West.” Although Trump is indeed fostering a sense of alienation among trans-Atlantic partners, he is far from legitimizing the reasons for doing so.

The debate launched by the recent “In Spite of It All, America” manifesto examining the future of the trans- Atlantic relationship is on the right path, but it is too monothematic in parts. Although my intention is by no means to question or deny the importance of foreign and security policy, an approach that reduces the debate to this topic alone gets me thinking. After all, this approach neglects the fact that globalization, automation and digitization have long since caused domestic and foreign policy to move closer together while blurring the lines distinguishing one policy field from the other.

Unlike any president before him, Trump has been able to convince people who were not profiting from our new world order that he understood their woes. In fact, these were the very people who put him in office. Indeed, the 2016 election has been referred to as the “can you hear me now?” election. Today, these “losers of modernization” are exerting their influence on the future of the Western world order. That being said, we cannot forget that this development is not entirely new; and it’s not just taking place in the US. Has the trans-Atlantic relationship been shattered by the efforts of one person? Certainly not. At this point, our approach should be to take advantage of Trump’s political egoism, his contempt for national and international institutions, his rejection of multilaterism and his utter disdain for the idea of a united Europe as an opportunity to revitalize and redefine the trans-Atlantic relationship. Indeed, it is up to us to do our homework now so we can enjoy the fruits of our labor while Trump is still president and, more importantly, when he is no longer in office.

The US and Germany share a common horizon of experience that began – however inauspiciously – during World War II. With this in mind, it is important to note that one reason for today’s rising alienation is a generational shift in the political sphere, one that has nothing to do with the current US administration. Over the past several years, a number of political figures whose yearning for the West had been fed by the direct experience of WWII and the post-war years have retired from politics. As more and more eyewitnesses of that era – those with vivid recollections of the liberation of Germany – fade into the background, the more difficult it becomes for the younger generation to bridge this emotional gap.

This is why we need new narratives that can revitalize our trans-Atlantic relationship. These stories can no longer revolve around military liberation; instead, they must focus on what makes liberal democracies such as the US and Germany so successful. This involves shared liberal democratic values, equality before the law and an open, tolerant society. In fact, in order to be a part of this community, our countries need not even share interests – which, indeed, they often do not.

First of all, it would suffice to have open and fair elections. Indeed, for all of us who doubt the strength of democracy under Trump, we need only look at the latest elections for governor in New Jersey and Virginia as well as the Senate special election in Alabama. The results show that the liberal tradition not only alive, but vibrant – and that we would behoove us to put aside our typical German pessimism in this case. The confident and professional media so despised by Trump is serving its purpose by fulfilling its journalistic mandate. In other words, there will be a time after Trump – and we should be prepared for it.

What can we do in the meantime to revitalize and redefine the trans- Atlantic relationship? While Trump is in office, it is urgent and necessary to identify and reach out to the president’s antagonists, especially those working in the complicated US system of checks and balances. These include elected members of Congress, scientists, academics, local politicians and all those who see multilateralism as self-evident and desirable. For example, in the realm of climate protection, California is currently showing that it is possible for reasonable environmental policies to succeed even without adherence to the Paris Climate Agreement.

In fact, there are plenty of areas in which we can work now to refine our shared values. For example, it is urgent that we explore the impact of digitization on the economy and the workplace in both our countries. Our response to the challenges of the fourth industrial revolution will have to reflect our liberal tradition and thus be differ greatly from the solutions offered by authoritarian regimes such as Russia and China. But how exactly can this work in a globalized market? In our era of growing populism within liberal democracies, the “future of work” is perhaps the most important trans-Atlantic theme on which to focus. How can we achieve a fair tax and trade policy? What should be the nature of internet regulation? In order to answer these and other questions, it is imperative that we engage in an intensive trans-Atlantic dialogue.

I am optimistic that we will succeed in this endeavor. On my travels throughout the US, which have often taken me deep into rural areas, I have experienced an American society steeped in the tradition of Woodrow Wilson; that is, not only do people want a better America, they also want a better world. At its core, the community of values in the West has always been shaped by an image of man as a bearer of freedom and dignity.

Anyone who travels through the industrial wastelands of the Ohio Valley and then visits Germany’s Ruhr Valley – both of which have been hit hard by the structural changes of recent decades – will immediately recognize that liberal and Western democracies will have to work together to provide political solutions to address the anger and hopelessness felt by those referred to in German as Rationalisierungsverlierer, or “rationalization losers.” This is where domestic and foreign policy intersect; indeed, without the anger and hopelessness felt by former coalminers in in the Rust Belt, Trump’s electoral success would have been inconceivable – and there would have been no resulting shift in policy alliances in the West.

Politicians of my generation are now obliged to use the coming years to establish reliable and sustainable contacts as well as to address the key challenges of our time – both in and outside of the political sphere. The self-absorption of Trump’s presidency provides us with a living reminder that we must explore, nurture and develop our shared values on both sides of the Atlantic time and again. After all, the more we know about each other, the less Trump will be able to spread his (mis-)interpretation of the situation. We must never forget that the trans- Atlantic relationship does not belong to the president in Washington; it belongs to the people who fill it with life.

How the new grand coalition, once formed, will pursue Germany’s European and foreign policy 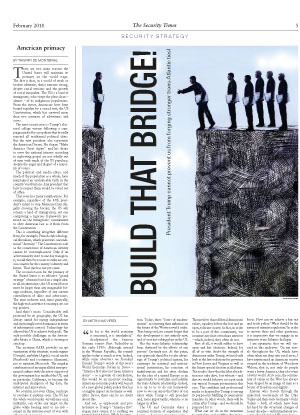