President for a half-year. The Security Times spoke with Boyko Borisov, prime minister of Bulgaria and the current president of the European Council, about the country’s role in and for Europe

The Bulletin of the Atomic Scientists has advanced the big hand of its Doomsday Clock, which forecasts the destruction of the world through nuclear war; the time is now two minutes before midnight. The Bulletin’s justification was the war threats levied between the US and North Korea – which have aggravated tensions between America and its rivals in China, Iran and Russia – as well as the expansion of existing atomic arsenals and the complete and utter lack of arms control talks. In Asia, China is seeking to dominate its neighbors, while North Korea has risen to become yet another country in the atomic weapons club. And in Eastern Europe, former member states of the Warsaw Pact are cowering before Russia. Is the world again becoming a place to fear?

What dangers do you see in Europe?
There is a general international trend of growing insecurity. We have a crisis in Ukraine; Crimea is occupied; the eastern Mediterranean is unstable; and then there’s Syria and Iraq. These are all processes that reflect the general security situation. Radicalization and terrorism also generate threats. Migration is becoming an ever-deeper problem for democratic societies in transit and host countries. This has led to the rise and development of nationalist and radical political entities in Europe, which carrying with them risks for these democratic societies.

How does Bulgaria assess the new threat posed by Russian policy in Ukraine, the Crimea and Transnistria?
The events in Ukraine changed the security environment in Europe and NATO-Russia relations. The military build-up in Crimea poses additional challenges. Breaching the principles of international law is unacceptable. The integrity of borders is inviolable, and this is especially important in today’s democratic Europe. We do not need new military conflicts. We need peace, cooperation, prosperity and respect for territorial integrity and sovereignty. Any actions that contradict these established principles should be deemed threats. Such actions we cannot and will not accept.

NATO is pursuing a two-pronged approach in terms of Russia: While readying its defenses and focusing on deterrence, it is also reaching out to seek common understanding through direct dialogue. What are the most pressing topics for discussion?
The two-pronged approach has its logic. The deterrence activities are entirely defense-oriented and in accordance with international law. However, dialogue is absolutely necessary for two reasons: first, through dialogue we can present our arguments; and second, it is the only way we can narrow the gaps between opposing positions and find a way out of the ongoing conflict burdening international relations. Instead of an escalation of tensions, we need cooperation towards resolving conflicts and fighting terrorism. I believe we can achieve a sustainable resolution of the Ukraine crisis within the Normandy Quartet, which would also allow for the normalization of NATO-Russia relations.

How would you evaluate developments in neighboring Turkey?
Turkey is one of the most important partners of the EU. The Bulgarian president will be hosting an EU-Turkey Summit, because there needs to be direct dialogue with Turkish leadership, dialogue not funneled through the media. Yes, there are problems, with human rights protection, for example, but the right approach is to talk things through in an open and frank way. We have many topics of common interest – combatting terrorism, migration. Renewing dialogue will benefit both the EU and Turkey.

For six months now Bulgaria is going to chair the Council of the European Union. The UK is saying goodbye to the EU, while many Eastern European countries are at least partially governed by nationalist, right-wing populist or Eurosceptic parties. What are Bulgaria’s plans for using its council presidency to advance European solidarity?
The motto of the Bulgarian presidency is “United We Stand Strong.” This motto also hangs over the entrance of the Bulgarian Parliament. Bulgaria will strive to be an honest broker in leading the discussions on the issues that connect us and unite us; we want to be part of all the integration processes of the Union – Schengen, the eurozone, asylum policy, the new security and defense policy. Our country ranks second in terms of public confidence in European values; our citizens have been seeing for themselves the benefits of European solidarity – in 2017 we witnessed 4 percent economic growth, and the same rate is expected for this year as well; the unemployment rate is now at 6 percent; highways have been constructed; waste and water treatment plants as well as energy-efficiency projects for residential buildings have been implemented; in our ten years of membership we have seen a 16-percent growth in employment; incomes have been going up; per capita GDP based on disposable income went up from 27 percent to 40.8 percent compared to EU; and our economy has grown by 41 percent. People in Bulgaria have never lived better since the country joined the European Union. We aim to work on the issues that are on the European agenda in a way that the EU citizens will feel they are the focus of European policies. This will help strengthen European solidarity, including on topics where there is currently no consensus.

What are your thoughts on the efforts to establish a European defense union, or Permanent Structured Cooperation (PESCO)?
The launch of PESCO is an important step for the fulfillment of the European integration project and the building of the European Defense Union. PESCO brings the EU closer to its goal of improving the cost-effectiveness of defense spending and becoming a serious partner in the field of international security. We support an adequate, ambitious and transparently functioning rule-based PESCO that will contribute to the security of the EU and the enhancement of the European pillar within NATO. PESCO’s success will depend on the progress of concrete projects, which we expect to be officially adopted soon.

When you see active European policy cooperation between France and Germany, do you feel hope for new progress towards integration, or rather concern over German-French dominance within the EU?
Rather hope than concern. France and Germany are the motor of European integration. The movement ahead of the whole European structure depends on the proper functioning of this motor. Of course, the uniqueness of the EU comes from the fact that each member state has its say and its voice is heard. The issues we have to solve require rapid solutions. Each member state carries responsibility for finding them and should make its contribution.

In 2015, Bulgaria also bore the brunt of a high number of refugees. Many now fear a new wave of refugees from Syria and Africa. What to do?
As I have said multiple times: First and foremost we should seek to address the root causes. And the activeness of European diplomacy in the process of solving the crises should increase. The EU should continue to support development and humanitarian policies. The solution is to help origin countries eliminate the causes for migration by overcoming poverty, investing in their economies and guaranteeing political stability. Education programs are needed for young people, for it is frequently they who are encouraged to go to Western Europe just to be able to send 50 or 100 euros a week to their relatives in their home country. At the same time we should make no compromise with the smugglers who literally trade in human lives. How many people have died on their way to “salvation”? The entry to the EU is through the official border checkpoints, where asylum-seekers will receive adequate care. Bulgaria is a role model as the country that best guards the external EU border, despite not being admitted to Schengen. It is also necessary that we continue working with the states bordering the conflict countries, such as Turkey. Since the agreement with the EU has come into force, migration pressure from Turkey on our border has dropped 84 percent.

Boyko Borisov
is prime minister of Bulgaria and the current president of the European Council. 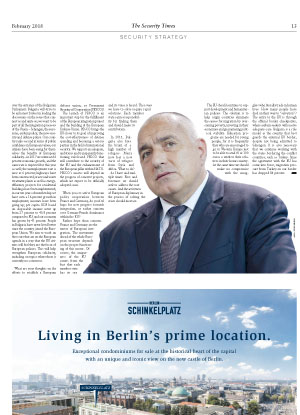