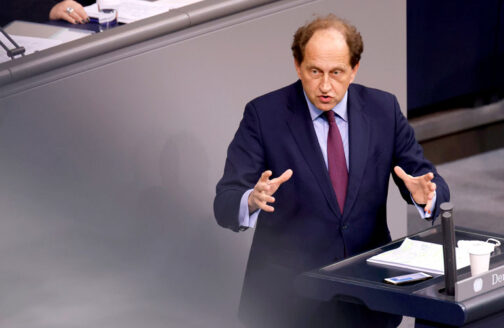 Good policymaking begins with a sober look at reality. One of today’s realities is that war and the threat of military force have by no means disappeared from Europe. Indeed, Clausewitz’s dictum continues to apply: War is merely the continuation of politics by other means. Russia is already using its 140,000 soldiers stationed at the Ukrainian border as an extension of its political and diplomatic arm. The reasons for the maneuver ostensibly have to do with security guarantees, short- and medium-range missiles and NATO. But behind the rhetoric lies a policy of geopolitical revisionism by which the Kremlin wants to reverse the results of the Cold War – by military force, if necessary. Above all, however, it’s about the incessant lure of freedom and democracy, which is also a thorn in China’s side.

It’s no coincidence that Beijing and Moscow have come together in autocratic unity against NATO’s eastward expansion. It’s also not by chance that China levied a broadcasting ban on the BBC in 2021 for its coverage of the situation in Xinjiang and that Germany’s Deutsche Welle had to shut down its operations in Russia in February 2022. Those of us who are reminded of the Cold War would do well to note that our societies and economies are more interdependent today and thus more vulnerable than in the 1970s and 1980s. We might even be looking at a “Cold War Plus” – a militarily charged systemic rivalry in which both sides could inflict much more serious damage on one another below the threshold of military force than was the case during the Cold War of the 20th century.

Such a situation would be extremely threatening for Germany; perhaps no other country benefits as much from free and fair trade and from a rules-based multilateral world order. If Germany wishes to survive in turbulent times, it’s going to have to make an active, tangible and appropriate contribution to the security of liberal democracies and the rules-based order. Germany’s new “traffic-light coalition” possesses the tools to meet these challenges. In the fall of 2022, we will present a national security strategy paper that defines our values, interests, goals and priorities while enabling us to align our political actions accordingly. In terms of foreign policy, we are well-known as a stable force for peace at the center of Europe, and we are also valued for our dependability, our clear commitment to NATO, the EU and to the trans-Atlantic partnership as well as for our historical links to the countries of Central and Eastern Europe. These constants are also reflected and confirmed in the new government’s coalition agreement.

In spite of these positives, however, it remains necessary that we rethink German foreign policy, even in some of the categories that have always been difficult for us in light of our history, such as geopolitics, deterrence and resilience. Our strained relationship to Russia once again demonstrates how necessary it is to join with France and the US in emphasizing dialogue, while at the same time fulfilling our obligations as NATO members; this sends a clear signal to our partners in Central and Eastern Europe and is an indicator of our reliability with regard to the US and Canada, our key trans-Atlantic allies.

Even in a “traffic-light” government, we need a credible nuclear deterrence, at least as long as nuclear weapons continue to play a role in NATO’s strategic concept. For the first time ever, a German federal government has included in its coalition agreement a commitment to take up the concerns of our partner states in Central and Eastern Europe in its own policy development. It is equally legitimate for us to articulate our security interests with regard to Russia. These include credible disarmament, arms control and a revival of the INF Treaty. It is understandable that partners such as Poland and the Baltic states are thinking aloud about whether Germany should or should not deliver weapons to Ukraine. It is equally appropriate that this has become the subject of controversial debate in Berlin. However, it is also true that the debate should not be reduced to one issue. There are many useful ways to show support for Ukraine that include political, economic and military means.

As a coalition committed to strengthening multilateralism, the German government believes it would make sense to reform the UN Security Council to reflect the realities of the 21st century. Before this can come to pass, we must pursue a smart foreign policy that coordinates closely with friends and allies but also with problematic partners around the world. First, we’re eager to revive the trans-Atlantic alliance and work more closely with democracies across the globe. The US continues to act as the guarantor of our foreign security policy. In the fall of 2021, 71 percent of Germans felt relations to the US were good or very good. As democratic countries, we must be ready to stand by states like Australia and Lithuania when they face economic pressures from Beijing. And we must use formats such as the Summit for Democracy, the Alliance for Multilateralism and the G7 presidency to defend the liberal world order.

The only way the EU can make itself heard on the world stage is to speak in a unified voice. Efforts to introduce majority voting in the EU Council of Ministers and to strengthen both the European External Action Service and the High Representative of the Union for Foreign Affairs and Security Policy are part of our coalition agreement. Joint action should be the rule and nation-state unilateralism the exception.

Europe must become more independent in the realm of energy supply and raw-material imports. It is equally important that Germany once again become the driving force behind a leading region for technology based on European values, and also that we establish clear regulations against the spread of disinformation. We can no longer afford to sit idly by as China and Russia use modern technologies to export their worldviews and suppress their populations, while we possess neither a European 5G network nor any adequate means to fight propaganda.

Good politics begins by looking at reality, but it doesn’t stop there. As Free Democrats in the “traffic light coalition,” we at the FDP are eager to improve reality. We want a clear commitment to more freedom and guaranteed human rights. Our policies stand for active climate protection, free trade and economic prosperity. Above all, Germany, led by its “traffic light coalition,” has made a solemn promise to actively seek to create peace and stability, even in a Cold War Plus. Germany accepts and will meet its responsibilities as an economically strong tech leader, a reliable NATO partner and a resilient democracy.

Alexander Graf Lambsdorff is a member of the German Bundestag and deputy chair of that body’s FDP caucus, where he is responsible for foreign, security, European and development policy. 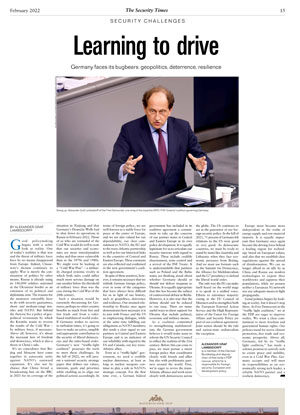