By Charles A. Kupchan

One down, three to go. And judging by Trump’s first year in office, the next three should be long and painful. As the US backs away from is traditional role as team captain, its “America First” foreign policy is setting the world on edge. Trump has already pulled out of the Trans-Pacific Partnership and the Paris Climate Agreement. Next on his chopping block may well be the Iran nuclear deal and US participation in NAFTA and the World Trade Organization.

America’s deliberate undermining of the rules-based international order it worked so hard to establish after World War II has left America’s partners understandably vexed, and wondering when it is time to give up on Trump. But even if justified, their approach is ill-advised.

Instead of turning their backs on Trump in anger and frustration, friends of the US should engage the president with hopes of curbing his destructive instincts. Trump will do more damage if he feels isolated, rejected and cut loose, while holding him close provides at least some leverage over his behavior and may impress upon him that partnership has its advantages. Moreover, the Trump presidency will not last forever. Trying to keep Washington tethered to the international community during his tenure will make it easier to repair the wreckage he leaves behind.

Learning to live with the Trump presidency means accepting the harsh reality that what you see is what you get. Indeed, his presidency is likely to get worse, not better, in the months ahead. The adults in the room – John Kelley, Rex Tillerson, H.R. McMaster, James Mattis – are unable to tame Trump, and some of them may well jump ship in the near future, eliminating whatever moderating influence they may exercise. Trump is also likely to ramp up his hard-edged populism as the mid-term elections draw near. With the Democrats poised to do well in November, Trump will seek to rally his base by doubling down on his nationalist and populist agenda.

Having alienated the more centrist voters who helped him win the presidency, Trump is retreating to his faithful base, which at least for now has commandeered the Republican Party. The Republican establishment is running for cover in the face of a mobilized and angry base. Whether he likes it or not, Trump is beholden to an ascendant insurgency of populist nationalists; he has already lost much of the rest of the country.

Trump has gravitated to the far right by inclination as much as by necessity. Even as Steve Bannon, Sebastian Gorka and other fervent ideologues have been banished from the White House, Trump’s racially tinged brand of nationalism has continued, if not deepened. His equivocation over neo-Nazi protesters in Charlottesville, his insults toward Hispanic immigrants, his decision to send back Haitians, Salvadorans and others who came to the United States to escape conflict and natural disaster, his disparaging comments about Africa – this is the real Donald Trump, not a political concoction of his handlers.

Confronted with this sobering reality, how should the international community handle the remainder of Trump’s tumultuous presidency? First, America’s partners should continue to try to connect with Trump, seeking to exercise whatever influence they may have over his behavior. Trump craves respect and acceptance; shunning and isolating him will only make matters worse. Moreover, engagement indeed has the potential to yield concrete payoffs. Even when Trump appears ready to start dismantling policies he does not like, he tends to offer an escape hatch. Rather than simply dismantling the Iran deal, he handed it over to Congress to address his concerns. He announced the end of the program allowing Dreamers (residents who entered or remained in the country illegally as minors) to stay in the US, but then opened a dialogue with Democrats about preserving it. He declared he was rescinding health care subsidies needed to fund Obamacare, but soon thereafter entertained a bipartisan proposal to salvage the funding. Even though Trump has announced his intention to withdraw from the Paris climate agreement, the US cannot formally exit the accord until 2020, leaving room to maneuver. It is difficult to know whether Trump’s stop-and-go style is a sign of genetic inconstancy or part of a shrewd negotiating strategy. But it does mean that the door is open to negotiation, and concerned parties should walk through that door. In the end, Trump may or may not uphold the Iran deal, allow Dreamers to stay in the US, preserve the health insurance of Americans in need or return to the Paris Agreement. Nonetheless, it is certainly worth trying to bring him around. To walk away from Trump is to encourage his worst instincts. Second, engaging Trump does not mean bending to his wishes; it means attempting to bring him around to sensible positions, and standing one’s ground when that effort fails. On the Iran nuclear deal, America’s partners must staunchly defend the pact, come what may; it is the only game in town. However, Europeans should engage Washington on the deal’s sunset provisions and how best to counter Iran’s missile program and its destabilizing regional behavior. Exploring side agreements or follow-on arrangements for addressing these issues may succeed in convincing Trump not to scuttle the deal. A good faith effort to address Trump’s concerns – rather than dismissing them – may be just enough to keep him on board. It is worth a try. In similar fashion, the international community should keep working on Trump regarding issues like climate change and trade. But in the meantime, the rest of the world is right to stand by the Paris climate agreement, even though Trump has renounced it. The same goes for the Trans-Pacific Partnership; its remaining members are doing the right thing by proceeding with a trade deal despite Trump’s withdrawal from the pact. If Trump seeks to back away from the World Trade Organization, it will be up to other members to defend a rules-based trading order. While engaging Trump, America’s partners, and Europe in particular, must prevent him from dismantling the liberal norms and rules-based institutions that have long anchored the West. Europe should make sure that the next US president does not assume office in a Western world that has been reduced to rubble. Third, America’s friends must prevent popular opposition to Trump from transforming into anti-American sentiment. Even if anger toward Trump may be understandable, and even if politicians are tempted to cater to it, doing so risks setting democratic societies against the US. If leaders around the world are to remain committed to working with Trump whenever possible – as well as reaching out to the US bureaucracy, Congress, and state and local officials, all of which may be better partners than the White House – they must ensure that their own electorates have not come to write off the US. Otherwise, any hope of sustaining a sense of solidarity and community among the Atlantic democracies will prove illusory. Otherwise, the US president following Trump may preside over a country that has turned sharply inward and lost its internationalist calling. The United States, long the anchor of republican ideals and multilateralism, is backing away from both under Trump’s leadership. This turn in US politics is part of a broader surge in illiberalism and populist nationalism playing out in many quarters of the globe. To help ensure that we are witnessing only a temporary setback – not a permanent reversal – in the fortunes of liberal politics, America’s partners should keep reaching out to Trump and resist the temptation to distance themselves from the US. Engaging Trump will limit the damage he can do, and make it more likely that the Trump era represents a dark detour for Americans – and not the new normal.

CHARLES A. KUPCHAN
is professor of International Affairs at Georgetown University and Senior Fellow at the Council on Foreign Relations. He served on the US National Security Council from 2014 to 2017. This article draws on an essay originally published in Süddeutsche Zeitung and Foreign Policy. 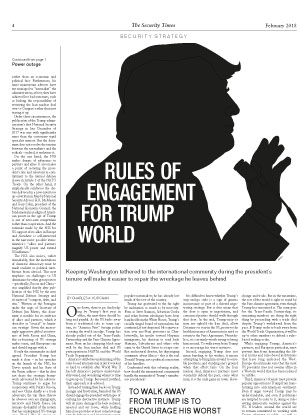