On a map distributed by the UN information service to humanitarian workers in the Nigerian state of Borno, each major traffic route is highlighted in a specific color. For example, green means workers can travel freely and yellow means they should travel only with an armed escort. Most of the streets are marked in red, however, which means that if workers were to travel these routes, they should expect fatal attacks at any time.

Borno is a particularly stark example of the miserable security situation in a region of Africa that has been haunted by Islamist terrorist militias for years. The entire Sahel – a semi-arid land belt that stretches across the continent from the Atlantic Ocean to the Red Sea – is now affected. It is home to one of the poorest and most dangerous zones on the planet. French political scientist Serge Michailof recently coined the term “Africanistan” to describe the area, warning that militant Islamism has the potential to spread and destabilize large parts of West Africa.

And it’s not just the Sahel that’s suffering from excessive violence. Today, neighboring countries, such as Côte d’Ivoire and Ghana, are also affected. In the Horn of Africa, the Somali al-Shabaab militias are exporting terror to Ethiopia, Kenya, Tanzania and Uganda. Jihadists recently started carrying out their nefarious activities in northern Mozambique as well.

Major terrorist organizations like Al Qaeda in the Islamic Maghreb are networked across the continent; some are even cooperating with the Islamic State (IS). Should these organizations expand their “crusades,” the consequences would be devastating, and include even larger numbers of innocent victims, further anarchy and hardship, and more refugees, who would increase migration pressure on Europe. In short, growing terrorism in Africa has long since become a geopolitical challenge of top priority.

The relentless rise of Boko Haram – a gang of murderers that emerged in 2009 from an Islamist sect in Nigeria – shows just how serious the situation is. Within only a few years, a group of around 20,000 fighters conquered a territory the size of Portugal in the northeast region of the country. Once there, they founded a caliphate and expanded their area of operations to the border regions of the neighboring countries of Cameroon, Chad and Niger.

The South Africa-based Institute for Security Studies has identified Boko Haram as one of the “deadliest terrorist groups in the world.” The UN also made a truly devastating assessment after the group’s 10 years of jihad, noting that it was responsible for nearly 20,000 deaths, including roughly 1.8 million internally displaced persons, 1,400 destroyed schools, 2,295 murdered teachers as well as famines, epidemics, misery and an ever-present fear.

The second major theater of terror is Mali, where a corrupt power elite “governs” a weak state that is constantly threatening to collapse under the weight of excessive violence. In 2013, a French intervention force was able to drive out a large number of the jihadists and insurgents operating in the northern half of the country. Since then, roughly 15,000 UN peacekeepers have been trying to secure the fragile peace. Operation MINUSMA is considered the UN’s most dangerous mission underway.

Germany is currently helping build a powerful Malian army in the context of an EU training mission there. Five Sahel states have come together to form the “G5 Sahel” military alliance, designed to stem the further rise of Islamists in the region. The US expanded its bases in West Africa after 9/11, and the US Africa Command has coordinated operations there since 2008. “Find, fix and finish terrorists” is the unofficial marching order of the mission.

The region south of the Sahara has become a virtual playground for intervention forces. Unfortunately, however, their efforts have had little impact to date. Military experts like Hans-Georg Ehrhart have gone so far as to speak of a “chimera.” Only one thing is certain at this point: the murderous attacks have not abated and, in some areas, are even increasing. As recently as last fall, more than 100 Malian soldiers were killed in the region.

France, too, has lost a total of 38 soldiers as part of its Operation Barkhane. Paris is now calling on its European partners to assist by sending more special troops to the Sahel, with Berlin already announcing its intention to provide support.

However, the question as to whether the problem can even be solved by military means is being utterly neglected. Instead of analyzing the structural causes of the misery more thoroughly, stakeholders are contenting themselves with finely worded commonplaces, such as “there is no development without security and there is no security without development.”

While there are some accompanying initiatives in the civilian sector as well as some projects designed to strengthen education, health care and state institutions, armed intervention in the region is first and foremost serving the security interests of the intervening countries. And only after those interests have been served is there time to focus on the well-being of Africa. For example, the EU’s priority is not merely to fight terrorism and organized crime; it also wants to reduce illegal migration. The EU is engaging in a type of advanced border-security system and thereby financing – by means of its migration partnerships – questionable allies such as Chad, where the dictatorial regime does more to aggravate problems than to overcome them.

Militant Islamism is gaining ground, particularly in neglected regions where the state and its institutions have clearly failed on a massive, nationwide scale. Those countries that find themselves in a state of persistent crisis, such as Burkina Faso, Chad, Mali, Niger and Somalia, have few prospects for development, their populations are poor and their battles over scarce resources are exacerbated by ethnic strife, enormous population growth and the effects of climate change.

These factors form an ideal breeding ground for terrorist movements. In this context, Islam is merely instrumentalized as a “liberation theology” that blames Western influences – including democracy, free elections, the rule of law, co-ed schools and vaccination campaigns – for all evils. Still, these same religious fanatics are quick to make use of technology made in the West, including off-road vehicles, rapid-fire weapons, rockets, drones, GPS, the internet and mobile phones.

At the same time, the jihadists have established a lucrative war economy, thereby making a living from looting, robbing banks, arms and drug-trafficking and demanding ransoms for kidnappings. There is yet another key source of income for these holy warriors: their smuggling services for migrants and refugees. Many young and unemployed men join these militias voluntarily, as they offer not only an income and food, but also power, an alternative world view and concrete potential for action.

The fight against these terrorist groups is made even more difficult by the fact that they operate in a system of extensive networks that benefits criminal gangs, corrupt politicians, religious leaders and local tyrants. In addition, rich foreign Salafists provide clandestine financial aid, and there has been no shortage of weapons in West Africa since Libya’s collapse.

In general, these holy warriors are despised by the population for a number of reasons: they kill innocent people, kidnap and rape women and obliterate entire villages and cities in order to establish their theocratic reign of terror. Today, however, there are also areas where they are respected. For example, in the northern districts of Borno, a splinter group of Boko Haram called Islamic State West Africa Province has assumed some of the functions of a state. It controls traffic routes, levies customs and taxes, regulates the trade of fish and agricultural products, supports the construction of farms, drills wells and builds clinics and public toilets.

In other words, these militants are pursuing a type of development policy designed to win people over. This is precisely what military strategists fail to consider when discussing potential military interventions. And this is also where the real dilemma lies.

The military response in the Sahel is not only part of the solution to the crisis, “it is part of the problem,” noted the Norwegian Refugee Council, making reference to the 80,000 internally displaced persons forced to flee due to military operations. Aid organizations lament the fact that, in 2019, the number of people suffering from food shortages in the central Sahel was three times that of the previous year.

One might expect the challenge of combating terrorism to be one of the most urgent tasks assumed by the African Union (AU). Yet this continental union of nations contributes the least of all to such efforts. In Addis Ababa, where the organization is headquartered, there has been a great deal of talk for years about an African security architecture and a rapid reaction force; unfortunately, there is also a considerable lack of institutional capacity, financial resources and often political will.

Moreover, when the AU actually makes a tangible attempt to avert a serious conflict by means of clever proposals, it is often skipped over and ignored. For example, in 2011, when the AU sought to prevent an escalation of the civil war in Libya through diplomatic means, it was ultimately forced to stand by and watch as NATO countries – under the leadership of France and the US – proceeded to bomb the country without further ado.

These developments brought about the subsequent crisis in Mali, as thousands of heavily armed Touareg mercenaries who had previously served the dictator Muammar Gaddafi fled back into their homeland, conquered the north of the country together with Islamist militias and founded the Islamic Republic of Azawad. During its short existence, this republic was a strategic retreat for terrorist militias from the region, including Boko Haram.

The West has only itself to blame for this debacle. And, unfortunately, it has not yet learned any tangible lessons from it. In this case, too, South Africa’s Institute for Security Studies issued a devastating balance sheet with regard to Washington’s military operations: “Without fail, US interventions in Afghanistan, Iraq, Syria, Libya and Somalia have exacerbated local situations and facilitated the spread of violent Islamist extremism.”

When French soldiers defeated the jihadists in northern Mali, they were celebrated as liberators by the local population. Today, for many of Mali’s citizens, these soldiers are an occupying force. Even though several battles have been won, the mood has shifted, mostly because the war on terror has continued. And it’s now true that if European and African allies fail to find alternative strategies, the Sahel could, in the upcoming years, become an “Africanistan.”

BARTHOLOMÄUS GRILL
was an Africa correspondent for Die Zeit and Der Spiegel until 2019. 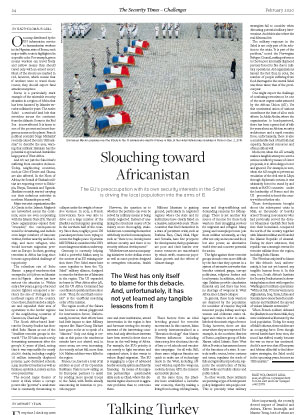