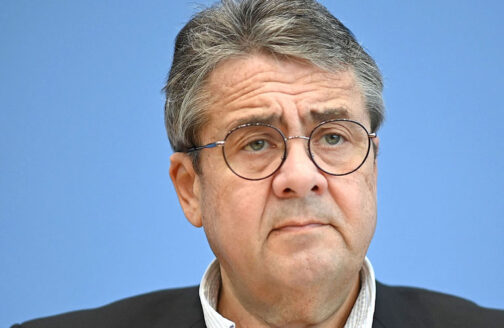 In an interview with The Security Times, Sigmar Gabriel discusses Germany’s complicated relationship to the US, to Russia and to the states of Eastern Europe.

The Security Times: What role does the German-American partnership still play in 2022? Is Berlin still a reliable ally of Washington? And vice versa?

In light of the near-tectonic shifts in the world’s economic, political and military axes of power, democratic states around the globe need each other as much as ever. Almost all democracies face two major challenges: reducing the polarization that is wreaking havoc among their populations and navigating geopolitical tensions with authoritarian regimes around the world. We live in a world that no longer has a global power emanating stability and order. The US, which had assumed this role after World War II, no longer wants to play this role. And it can’t continue to, because it now has a serious competitor: China. The US political scientist Ian Bremmer describes this world without order as “G Zero.” Neither the G7, nor the G20 nor even the international conferences of the UN creates order; instead, we once again find ourselves living in a time of great power rivalries and cutthroat interest-driven politics. The question remains as to who will determine the new world order. If the US and Europe, and Germany in particular, want a say in the game, they can only do it together. Bowling alone is a dangerous game in the 21st century.

Can or should there be something approximating equidistance between Germany and Russia and between Germany and the US? What significance does the German-American partnership still hold? Has German confidence in the US not returned under President Joe Biden?

I’ve never understood this talk about Germany’s alleged equidistance from Russia and the US. Of course, we have far more in common with American democracy than with China’s one-party dictatorship or with authoritarian Russia. This was true even under the presidency of Donald Trump, who, by the way, could be, and was, voted out of office.  Anyone who questions Germany’s close ties with the US is, de facto, also working to destroy European unity. We Germans sometimes have a short memory and believe our history only began after 1945. Our European neighbors have a much longer memory. For many – not only in Central and Eastern Europe – Germany only became predictable through its close ties to the US. One need only remember that the governments of the United Kingdom, France and Italy opposed German reunification in 1989, as they feared the return of the German Reich. It was the US that was able to break this resistance through its guarantee that even a reunited Germany would remain integrated in the trans-Atlantic and European spheres.

Why is NATO’s eastward expansion looked upon so critically in Germany? What is the basis for what you describe as the “threat perception of the encirclement of Russia”?

This is indeed astonishing, because the eastward expansion of NATO has created Europe’s most stable and lasting peace since the Peace of Westphalia. Just imagine if there was some kind of gray area and power vacuum from the north to the south of Europe. For decades, it would have been an invitation for all kinds of external destabilization attempts. NATO’s eastward expansion prevented that from happening and thus, in a well-understood sense, created security for Russia as well. There are probably several reasons for the kind of “guilty conscience” present in Germany, in particular concerning NATO expanding east. It has something to do with the immense suffering Germany wrought upon Russia in World War II. Germany rightly wanted and wants to reconcile with this Russia. The problem is that our historical memory has gaps, because the Ukrainians, the Poles, the Baltic states and other Central and Eastern European countries suffered just as much from Germany’s Nazi-era murder machine as Russia did. Today, these countries see their security and freedom endangered by Russia and hope to get the same protection from joining NATO as we West Germans and West Berliners received during the Cold War. Reunited Germany, the Berlin Republic, has forgotten how to perceive European developments through the eyes of our neighbors. Geography and history determine the peoples’ view of the present and future. And the geographical situation and historical experience of Poland, the Baltic states or Ukraine are quite different from ours. It would do German politics and the German public a lot of good if we were to acknowledge this again. Divided Germany was much better at this; we knew we had to understand our neighbors if we wanted to live in peace. Reunited Germany, on the other hand, sometimes walks around Europe like it owns the place.

What can Germany do to help ease tensions at the Russian-Ukrainian border?

It can reexamine the basis of Willy Brandt’s policy of détente, but not with the naïve sentimentality that some are currently indulging. Brandt’s détente was only successful because it was absolutely clear where the West German Federal Republic stood: that is, with both feet in the Western alliance and in the trans-Atlantic community of NATO. Strength and readiness for defense on the one hand and readiness for dialogue and détente on the other are two sides of the same coin. If there had been doubts about West Germany’s reliability, Willy Brandt’s Ostpolitik would have become a pawn in the strategic machinations of the Soviet Union, rather than a negotiating partner to be reckoned with. Even today we are only taken seriously if, when in doubt, we are also prepared to make the price as high as possible for whoever breaks the peace in Europe and is prepared to go to war.  Not in the military sense, but most certainly in the economic sense. And we must not fear the fact that this will also demand something of us. Peace also requires the courage to defend it.

The SPD repeatedly refers to Willy Brandt’s Ostpolitik. What lessons remain relevant for us as we deal with Russia today?

The essential difference to the situation back then is that the Soviet Union was, at the time, a status quo power. It was concerned with securing its borders and its sphere of influence. With the Helsinki Accords and its acceptance of the Oder-Neisse border, the West guaranteed this security. And in exchange, the Soviet Union was willing to sign on to the recognition of human rights. It was not for nothing that the civil rights movements in Poland, in the former Czechoslovakia and in the USSR referred to this agreement in Helsinki. But today’s Russia wants to change borders. It is not a status quo power; it wants to impose a revisionist policy. Changing borders in Europe and returning to the policy of a limited sovereignty of states in Northern, Central and Eastern Europe, as the Russian leadership now intends, cannot be a basis for détente. On the contrary – they create tension.

You recently said that Europe and Germany do not lack the willingness to negotiate and engage in dialogue or the will to ease tensions with Russia, but that they lack the will to “show toughness if necessary” when it comes to peace. What could or should this toughness mean?

To be prepared to threaten a high price for breaking the peace in Europe. If Russia really does use military force against Ukraine, this will not only mean the end of Nord Stream 2, but Germany and Europe must also be prepared to end energy cooperation with Russia altogether. That wouldn’t happen overnight and it would cost us money, but you have to be tough if you want to be taken seriously as a negotiating partner.

Former German Chancellor Gerhard Schröder has been nominated for the supervisory board of Russia’s state-owned gas company Gazprom. He recently spoke of “saber-rattling Ukraine.” What influence does Schröder have on the alignment of the SPD’s foreign and energy policy?

My impression is that Gerhard Schröder speaks for himself. And he’s allowed to do that. And even if I don’t agree with him one bit on this point, I think it’s right that he doesn’t duck out of the way and that he takes his stand. What should concern us more is that there are serious voices in the US who believe that Russia has every right to grant its neighbors only limited sovereignty in their foreign policy. It is these ultra-realpolitikers who expect good behavior from the neighbors of great powers like the US, Russia or China that worry me more than Gerhard Schröder’s posturing. It shows that we Europeans can by no means be sure that US presidents are prepared to defend European interests against Russia. In the future, we will have to do this on our own if there is any doubt.

Sigmar Gabriel was German Foreign Minister from 2017 to 2018 and party leader of the SPD for five years. He is chair of the Atlantic Bridge, which was founded by John McCloy and Eric M. Warburg.

The questions were posed by Lutz Lichtenberger and Jonathan Lutes. 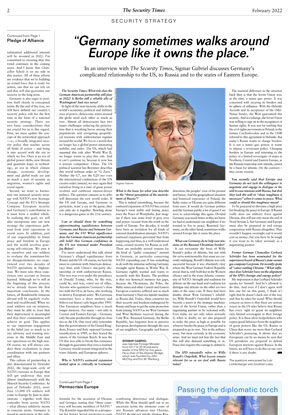