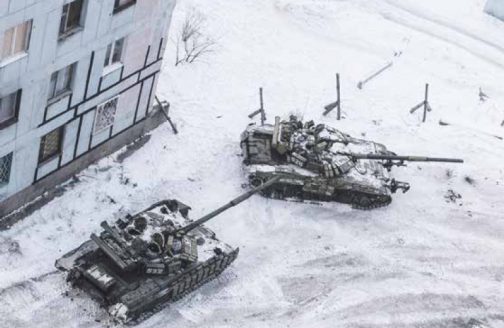 At the end of January, fighting in Eastern Ukraine escalated again. On that weekend, newly elected US President Donald Trump and Russian President Vladimir Putin spoke by phone for the first time. Many in Ukraine saw a connection between this call and the fighting for the town of Avdiivka. But this renewed escalation in the war’s third year follows a very different, far more general pattern – winter is fighting season in the former coalmining region of Donbass.

Forty people were killed in one week along the whole front in heavy fighting for the towns of Avdiivka, held by Kiev’s government troops, and Yasynuvata, occupied by rebels controlled by Moscow. In the region along the “contact line” – the Eastern Ukrainian front – the power supply broke down. According to the government, 400,000 people were at least temporarily without power, heating and water. According to local community representatives, several thousand citizens had to leave their homes and shelter in tents in temperatures as low as minus 15 degrees Celsius.

The head of the Avdiivka coking plant, one of the region’s biggest industrial facilities that produces coke for steel processing as well as for heating people’s home, reported that the plant had stopped working. A water filtering plant vital to the survival of people on both sides of the front was shelled and could not be repaired for days, an incident that infuriated the deputy chief of the OSCE monitoring mission. His briefings, issued via Skype, and the Twitter messages of his press corps were increasingly critical.

Indications are that pro-Russian rebels controlled by Moscow initially launched the attack, and it has been claimed that GRAD rocket launchers, prohibited under the 2014 Minsk Protocol, were used again. Western observers also noted that the Ukrainian army responded with much greater fighting force than they had a year ago. The daily lists of shellings noted by OSCE observers now take up more than a dozen pages – a significant fact considering it was recently so quiet that many observers began to believe it was a true “frozen conflict.”

But this third winter of the war also fits yet another pattern. The continued fighting is concurrent with new diplomatic initiatives. Over the weekend, as the lights went out in Avdiivka, not only did Putin hold a phone conversation with Trump; on the following Monday, Ukrainian President Petro Poroshenko spoke in Berlin for the first time this year.

This is not the first time that Eastern Ukraine has been bombed back onto the diplomatic agenda. The Council of Europe was shocked. “We are particularly concerned about the humanitarian situation in Donbass,” said Secretary General Thorbjørn Jagland.

The guardians of the European Convention on Human Rights do not seem to have paid much notice, as more and more politicians have gotten used to the idea of settling for a permanent front in Eastern Ukraine. This is true even in Kiev, after more than 10,000 deaths and two million refugees in and around Ukraine, and after a Minsk Protocol that provides for free elections in occupied areas, with the chance that pro-Russian rebels could be elected from there to the Kiev Rada.

This is not politically viable in Kiev, where the plan has been rejected, and again with a very good argument. As long as there is no ceasefire, free elections are not possible. And Moscow? Moscow does not want to lose control of the Ukrainian-Russian border along the occupied areas.

The question remains of what Kiev can do now to maintain a chance of regaining full control over its territory. The answer: give more help to people in areas occupied by the pro-Russian rebels.

On a sunny day in early summer of 2016, the chairman of the Rada invited international journalists to an interview for the first time. Andriy Parubiy has been the parliamentary president since April 2016. During the Maidan Revolution he was the subsequent representative of ex-Prime Minister Arseniy Yatsenyuk’s People’s Front and a member of the security force organized by the demonstrators themselves. Shortly after this he also fought in Eastern Ukraine. Parubiy has known war from the outset. Shortly before the interview he had been in the US. “I am shocked at the bad image even our friends have of us there,” due mainly to corruption and the slow pace of reforms.

Yet another trip took him to the Croatian capital Zagreb, where he met with representatives of former Croatian leaders from the 1990s. During the Balkan wars, the east of the Slavonia region and the Krajina area in the former Yugoslav Republic of Croatia were occupied by Serbian separatists loyal to Belgrade for almost four years. In August 1995, soldiers overwhelmed the area of Zagreb historically inhabited by Croatian Serbs, who by then had built up an effective army. “We knew what happened there militarily in Croatia,” said Parubiy in the spring of 2016. But he didn’t know about the concessions Zagreb made to the Croatian Serbs, especially in the regional capital of Knin, after UN mediation. “They compromised to maintain the unity of their national territory,” said Parubiy.

The fact that they do so is also unpopular with many Ukrainians, although this would be precisely the way to “reach the hearts of people in the occupied areas,” says a former member of the UN refugee agency in Eastern Ukraine.

Instead, at the Luhansk region’s only crossing point, Stanica Lugansk checkpoint, dramatic scenes play out every day. Sometimes 3,000, on other days 5,000 mainly elderly people wait for hours in the freezing cold to cross to the other side.

For humanitarian reasons the UN refugee agency has been calling for the opening of more checkpoints for quite some time. “Current processes at the checkpoints have seriously limited people’s opportunities to leave the conflict zone to go home or to visit family members or their properties,” said UN High Commissioner for Refugees Filippo Grandi during a visit to Kiev last November, adding, “many people no longer have access to medical care.”

The alternative would be for Kiev to offer people in the occupied areas these services, such as setting up payment offices directly at the checkpoints to make it easier for people to draw their pensions. It would involve a few minor compromises for a major objective: the support for Kiev from Ukrainian citizens in the occupied areas. This would ultimately invalidate the claim to power of the Moscow loyalists in Luhansk and Donetsk.

A version of this article appeared in print in February, 2017, with the headline “Checkpoint Ukraine”.

Frank Hofmann is a Berlin-based reporter for Deutsche Welle and author of the documentary film Maidan Dreaming (2016).

From Brussels with love. To a more assertive EU in a volatile world