The allegations are nothing new. Human rights organizations have been accusing European arms manufacturers of aiding and abetting war crimes in Yemen since 2015. That was the year Saudi Arabia’s air force began bombing military and civilian targets in the country sometimes referred to as “the poorhouse of the Arab world.” As a result of the bombings, the judiciary in Italy launched an investigation into RWM Italia, a subsidiary of the German arms giant Rheinmetall Defence, which produces precision guided bombs on the island of Sardinia. In July 2019, the parliament in Rome revoked the company’s export license for the sale of MK 80 aircraft bombs to Saudi Arabia and the United Arab Emirates.

Those two Gulf monarchies head up an Arab military alliance that wants to drive the Houthi rebels out of Yemen’s capital, Sanáa, and other parts of the country. The UN High Commissioner holds this alliance responsible for one-third of all civilian casualties in the war. For its part, the German government stopped issuing permits for arms deliveries to Saudi Arabia more than a year ago, mainly because of the murder of journalist Jamal Khashoggi in the Saudi consulate in Istanbul in October 2018, but also because of the war in Yemen. In 2019, however, deliveries to European arms projects were permitted in some cases.

After submitting their criminal complaint to the International Criminal Court (ICC) in The Hague in December, German and Yemeni human rights activists are now seeking to put a stop to these deliveries. In December, the Berlin-based European Center for Constitutional and Human Rights, the Yemeni human rights group known as Mwatana and four other organizations filed a lawsuit against Airbus, the European joint venture that also happens to deliver combat aircraft to the warring parties in Abu Dhabi and Riyadh. Moreover, the complaint named the largest German defense company, Rheinmetall Defence in Düsseldorf, whose Italian subsidiary RMW Italia has manufactured bombs dropped on residential areas in Yemen.

The 350-page complaint argues that no party can say that they were unaware of the atrocities being committed with the weapons delivered. It lists 26 air strikes on markets, schools, hospitals and other civilian targets in Yemen, all of which would not have been possible without the supply of armaments and spare parts from Europe as well as training and technical assistance from the Arab military coalition.

The complaint focuses on companies and political actors in Germany, France, the United Kingdom, Italy and Spain. In addition to Airbus Defence and Space and Rheinmetall Defence, the other companies named are Dassault Aviation in France, Leonardo in Italy and the UK’s BAE Systems, the latter of which signed a contract with Saudi Arabia in 2007 for the purchase of a total of 72 Eurofighter Typhoon jets.

The ICC took up its duties in 2002 and is responsible for the prosecution of wars of aggression, war crimes, crimes against humanity and genocide. However, the court is not authorized to investigate the government of Saudi Arabia or its military allies, such as the United Arab Emirates or Egypt, because those countries have not joined the ICC. Germany and other EU countries, on the other hand, are signatories bound by its decisions.

For now, the companies concerned are continuing to show a measured reaction to the charges, though that could change as investigations continue. “The final decision on the export of arms is made solely on the basis of a release issued by the federal government,” noted an Airbus spokesman in December, thereby placing the responsibility squarely on the shoulders of political decision makers.

And yet, it is exactly these politicians who for years have raised concerns among the arms lobby, especially because the Grand Coalition in Berlin has signaled its intention to push through an increasingly restrictive export policy. Therefore it is rather surprising that in 2019 German arms sales amounted to a record of €8 billion. A statement issued by the leading lobbying group known as the German Security and Defense Industry Association argued that “if Germany wants to claim a special role for itself – one that is incompatible with its closest European partners – in the realm of arms exports, it will isolate itself in Europe and no longer be seen as a partner for arms cooperation agreements and joint projects.” This argument has been heard before under the catchphrase “German-free,” which is used at trade fairs so as not to deter potential buyers.

The suspension of arms exports to Saudi Arabia after the Khashoggi murder has already caused turmoil in the arms industry. So far, however, weapons manufacturers have been cautious with regard to the damage claims looming on the horizon. Last year, the Baden-Württemberg-based group Würth alone filed an objection to a decision made by Germany’s Minister of Economic Affairs, Peter Altmaier, which prohibits the delivery of switches for armored police vehicles to a French company that would then export the vehicles to Saudi Arabia.

Today, support for the Arab military alliance in Yemen from German corporations and government members is not the only thorn in the side of human rights organizations and opponents of war. It looks like arms deliveries to Turkey, including leopard main battle tanks manufactured by Rheinmetall and Krauss-Maffei Wegmann, might also be the subject of litigation in the near future.

Markus Bickel
is editor-in-chief of Amnesty Journal, a magazine published by the German chapter of Amnesty International. 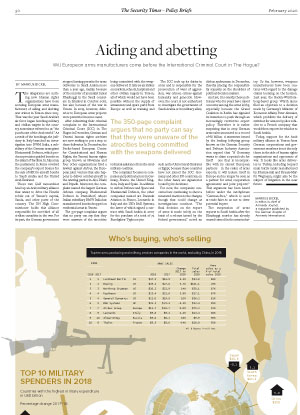