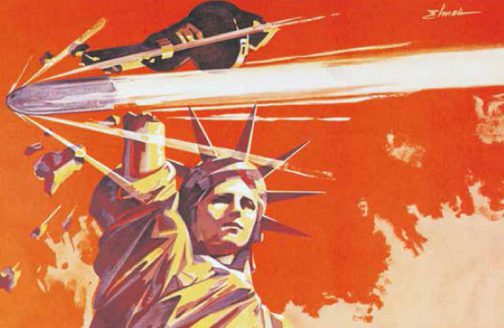 It is unclear whether US President Donald Trump is aware of the history behind the expression “America First,” the term he uses to describe his foreign policy vision. The catchphrase was first used just before World War II by isolationists who opposed any American engagement in the mounting European crisis. The echo of that dark period has relevance for today. At that time, the structures that had been put in place after World War I, in particular the League of Nations, were disintegrating, and a growing number of leaders around the world were exclaiming: “My country first!” We know how it ended. Today, in an age of nuclear weapons and other weapons of mass destruction, the principle of “my country first” would have even more devastating consequences.

Europe, which has suffered more than any other continent from the scourge of nationalism, is positioned best to vigorously counter the narrative of “my country first.” Europeans must present a united front in order to be taken seriously by the Trump administration. They also must stand their ground in relation to a more assertive Russia, which is reported to be backing nationalist and populist movements across the continent and staging cyber attacks intended to alter the course of key elections in France, Germany and the Netherlands.

2017 is a crucial year for Europe, as these elections can decisively advance or reverse the trend towards nationalism and fragmentation that began with the Brexit referendum and became a global phenomenon. If nationalist forces prevail in these contests, it is likely that the “my country first” narrative will gain momentum, with terrible long-term costs for all – including Russia.

European states need a shared strategic approach to meet these challenges. Priorities should include: a greater commitment to their own security, made visible through defense spending; greater organization, possibly through a European pillar in NATO; and seizing the initiative to advance arms control arrangements that would help avert the risk of a major war.

Trump has given the Europeans ample cause for concern. He has declared NATO obsolete; he speaks more glowingly about Russian President Vladimir Putin than about many Western leaders; and he suggests that he will apply his transactional vision of diplomacy to longstanding alliances. Some of his pronouncements suggest that the US commitment to defend Europe depends on the willingness of Europeans to pay for it, rather than on shared values. The person rumored to be the next American ambassador to the European Union, Ted Malloch, has bragged that his role in bringing down the Soviet Union is relevant experience to the goal of “taming” the EU. Some members of Trump’s entourage are reveling in the discussion of which country will follow the British example and leave the EU.

The Europeans should take a position that is firm but nonconfrontational. For a start, they need to become more serious about investing in their own defense. Most European members are spending significantly less than the NATO goal of 2 percent of GDP. If they do not change course, the Trump administration will be less likely to take their interests into account.

There is a real risk that the US and Russia will not consult the Europeans in making a deal to redefine the regional security landscape. Trump, who considers terrorism the numberone threat for the US, may prioritize cooperation – or the appearance of cooperation – with Russia in the Middle East, while making concessions on issues that are at the core of European security interests. For instance, if the US chooses to scrap sanctions against Russia, there would be little leverage left to convince Putin to withdraw completely from Eastern Ukraine.

However, Europeans cannot simply buy American commitment through increased defense spending, and NATO cannot sustain itself as a political alliance if it is viewed only in transactional terms. It is time to strengthen the alliance by reviving the concept of a European pillar of NATO. Given the current mood in the White House, it will be up to the Europeans to present a clear and compelling vision of what NATO stands for in the 21st century.

The principle of collective defense, as set forth in Article 5 of NATO’s founding treaty, is only credible when undergirded by shared values. Europeans are more likely to be heard – by Trump, as well as by Putin – if they speak with one voice on defense issues. Europeans will need to have political ownership of this effort, the modalities of which – whether through a fully separate European headquarters or an increased role for the European Defense Agency – should be discussed among EU members. The European Defense Action Plan, proposed by the European Commission in late 2016, may provide the basis for greater coordination, even if intergovernmental mechanisms remain the driving force in matters of security.

Deciding which countries would constitute a European pillar is a tricky issue likely to stall any formal institutional approach. There will be disputes over the involvement of European NATO countries that are not members of the EU, such as Norway or, even more contentious, Turkey. The United Kingdom, one of the strongest military powers in Europe, is preparing to leave the EU. Other EU countries, like Sweden, make significant contributions to European security without being NATO members.

Given these complexities, an informal political approach is the only viable way forward. A caucus could be organized – including, but not limited to, the six founding members of the EU – to agree on two basic principles: a) the emergence of a European pillar is necessitated by the altered strategic landscape; b) a key goal of the European pillar is to pursue ways to strengthen NATO. The core group should be open to other members of the EU while establishing close consultation mechanisms with EU non-NATO members as well as with NATO non-EU members. The United Kingdom would ideally find that its strategic interests are well served by its involvement in the core group.

The Europeans should also mount a major diplomatic initiative with Russia on arms control, even if an overarching agreement with Putin on security arrangements may currently be out of reach. Three complementary tracks should be pursued, each involving the Europeans in different ways:

A version of this article appeared in print in February, 2017, with the headline “First responders”.

Jean-Marie Guéhenno is president and CEO of the International Crisis Group, a conflict prevention organization.