Let’s face it: Germany and Europe may one day be thankful for Donald Trump. After all, his destructive and cynical unpredictability is finally forcing them to sufficiently appreciate their responsibility for foreign and security policy in an ever more fragile world.

Six years ago, German President Joachim Gauck attempted to give direction to his country’s security policy. The Federal Republic must “be ready to do more to guarantee the security that others have provided it with for decades,” he warned. When it comes to deploying Bundeswehr troops, “Germany should not say ‘no’ on principle. Nor should it say ‘yes’ unthinkingly.” Yet Gauck called for more intervention, “earlier, more decisive and more substantial.”

A new global order is emerging, a perilous process that can be compared to tectonic shifts in the Earth’s crust. This includes the retreat of the US from its role as the world’s chief super power. Weary from all its wars, America is no longer prepared to bear the burden of acting alone as the “world’s policeman.” Trump’s “America First” is not the cause, but rather the expression of this development.

In the days of crisis following the targeted US drone strike that killed Iranian General Qassim Soleimani, Trump’s message to Europe was clear: The problem of the Middle East would henceforth fall largely into the hands of the Europeans. NATO must take more responsibility in the region. As a country enjoying newfound energy independence, America will no longer rely on oil from the Middle East. “These historic accomplishments changed our strategic priorities,” the US president announced in early January. And because the country’s new priorities include contending with its Far East strategic rival, China, Europe is losing its importance to the US.

Meanwhile, other “sovereign powers,” notably China and Russia, are filling the geopolitical void caused by the end of the Pax Americana. They are marching in as the authoritarian avantgarde of a “conservative internationalism,” as it’s referred to in Moscow. In the new global order defined by them alone, rival great powers strengthen their military power and weaponize their influence and their veto in the UN Security Council. They broker fragile alliances based on the law of might, with little regard for democratic principles, the rule of law or human rights.

Europe and particularly Germany are in danger of becoming a plaything in this development. Although the upheaval could hardly be greater and the challenges hardly more daunting, German and European foreign and security policy seems almost dispirited.

Maintaining the status quo, however, is no longer an option. An alliance of multilateralists must be based on more than just consolation and reassurance. The Germans must at last engage in an earnest debate on security and defense. For decades, the commercially prosperous Federal Republic profited tremendously from the rules-based – if never perfect – liberal world order guaranteed by the US. Especially in Europe, this system fostered democracy, the rule of law and the proliferation of human rights. Comfortable and showing a penchant for moral superiority in its strategic position of self-restraint, Germany savored its post-reunification peace dividends, including a free ticket to further prosperity through its role as an export nation ne plus ultra. In this scenario, the country’s values-based foreign policy very rarely stood in the way of its economic interests.

Russia’s 2014 annexation of Crimea pulled Germany out of its comfort zone. Russian President Vladimir Putin’s eventual renunciation of the European security architecture formulated in the 1990 Paris Charter was a shock to the West – a reaction that had been underestimated by Moscow. All the while, China’s global ambitions solidified the Middle Kingdom in its position as the world’s second largest economic power. And then came Trump, who simply scoffs at the liberal world order, if he even knows what it is.

Germany is obligated to formulate answers – as sober as they are bold – to fundamental questions concerning its role and responsibility in a new world order. “Europe needs to carve out its own geopolitical role” reasoned Angela Merkel in the Financial Times, while the EU’s new High Representative for Foreign Affairs and Security Policy, Josep Borrell, has expressed that Europe must learn the “language of power.” Taking on greater responsibility is not tantamount to conceding to Trump. Put another way, it’s sensible to be prepared for conflict.

Security policy proposals like that of German Defense Minister Annegret Kramp-Karrenbauer, who argues for engagement in northern Syria, could provide a piece of the puzzle. But proposals thrown into the wind like confetti – with no recognizable strategy and without consultation – are counterproductive.

German foreign and security policy is always European policy; it considers the interests of other European countries to be as important as its own. Grounded in its inextinguishable guilt and responsibility for the greatest tragedy in twentieth-century Europe, the two fundamental principles of German foreign policy remain unchanged: “Never again” and “Never alone.” However, Germany’s self-evaluation as Europe’s model citizens sometimes approaches a denial of reality.

Many countries in Europe regard the country more as an egotistical profiteer prone to double moral standards than as Europeans in solidarity with their neighbors. This conflict in perception was most recently on display in the debate over the Nord Stream 2 gas pipeline. As spelled out in the EU’s Energy Union, “solidarity and trust” were to be the critical ingredients for achieving EU climate protection goals as well as for minimizing the EU’s dependence on Russia through a diversification of its energy supply. Berlin is happy enough to act as Europe’s overlord, say its critics, but if its own economic interests were at stake, then Germany would pursue realpolitik under the banner of “Germany First.”

And in the US, it’s not just Trump who disparages the Germans as freeloaders who shirk their commitments to the 2-percent goal while brokering deals with Putin worth billions of euros; recent sanctions on companies working on Nord Stream 2 were passed by a large bipartisan majority in Congress.

French President Emmanuel Macron is impatiently urging “European sovereignty”; the addressee of his demands is Berlin. Macron believes the EU needs more engagement – in Mali, perhaps – and less cheap and timid self-restraint. Macron paints a picture of a multipolar world in which the EU remains marginalized and ineffectual as the last bastion of democratic values and freedoms.

Europe urgently needs strategic autonomy, and so does Germany. This includes the capability not only to formulate, but also to implement foreign and security policy goals. Economic might and the power of innovation are critical, but so is hardware: Europe must become stronger militarily, combining national sovereignties at the military level and intermeshing with NATO. Europe will have to organize its own defense more independently while Germany must pay more for defense on a permanent basis.

European sovereignty – and with it the recognition of a truly equal partnership with the US – could flourish by way of the European Intervention Initiative proclaimed three years ago by Macron. By now, 14 European countries have signed on to the project that also includes non-EU-member European states. Yet it does not constitute an intervention force; it is rather a sort of coalition of the willing-to-project-power. It is hoped that cooperation will give rise to a strategic culture of joint action that could, in the distant future, facilitate joint European military operations, perhaps to address humanitarian crises. It deserves to be given a chance, above all by the hesitant Germans.

And what will become of NATO, which has been so successful over its 70 years? “To preserve NATO,” posits former German Foreign Minister Joschka Fischer, “the EU must act as if the Alliance were already gone.” While neither “obsolete” nor “brain-dead,” NATO is in deep crisis. Europe’s security remains dependent on the nuclear umbrella held aloft by the US. Berlin’s clear obligation to rapidly meet the 2-percent goal would promote unity within NATO more than would perhaps any “expert group,” such as the one proposed by German Foreign Minister Heiko Maas.

NATO is in need of a hard reality check. Just next door is the Middle East, ablaze with conflict; further east lies the strategic challenge of China; and then there are the authoritarian developments within the NATO member states of Hungary, Poland and Turkey. A fruitful debate over potential sanctions is urgent; after all, an alliance based on shared values can tolerate only so much realpolitik and cynicism. 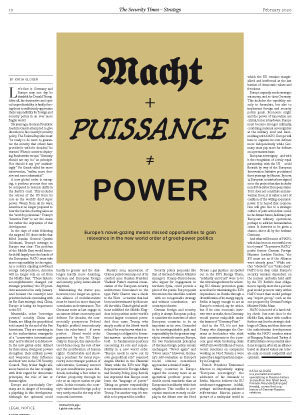