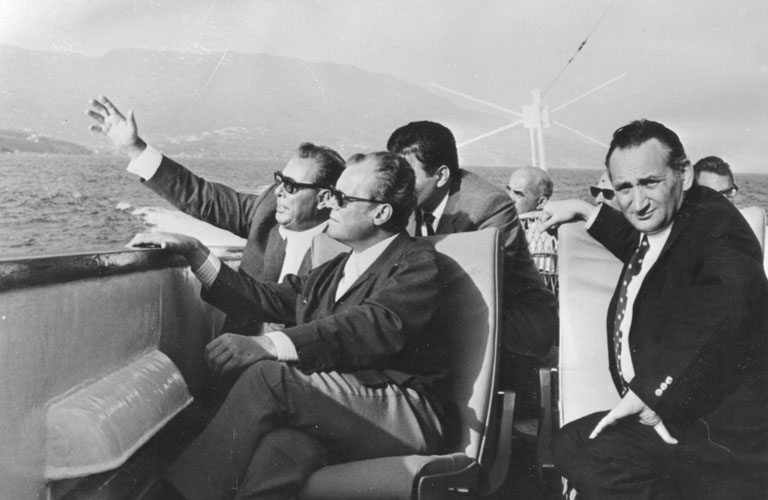 When Social Democrats make the case for new initiatives in Germany’s official Russia policy, they are usually dismissed for being “naïve Russophiles.” So let’s get the following out of the way before we go any further: Yes, the Russian state has broken international law and continues to undertake obvious attempts to destabilize the EU and Western democracies. And, yes, it’s highly likely that Russian forces have influenced elections and referenda. Russia’s democratic deficits are also plain to see, while the human rights situation in that country is blatantly unacceptable. And it doesn’t help that a tempestuous and unpredictable US president has been tweeting amok from the White House for the past two years. Indeed, this is a man who does not shy away from spreading fake news and sparking confrontations and escalations wherever he can.

What conclusions can we draw from all of this? How are we to deal with this highly explosive and challenging situation? It is our firm conviction – precisely because the situation is so problematic and increasingly dangerous – that we should take time to reflect on how we can relieve tensions and reduce them to at least a manageable level. In light of the prospective termination of the Iran nuclear deal, the scheduled end to the INF Treaty and the possible non-extension of the New START arms reduction treaty set to expire in 2021, we are faced with the potential collapse of the entire system of international arms control – an event that would have unforeseeable impact on global security. The rules-based international order as a whole is at stake. We find ourselves at the beginning of a new nuclear arms race with many groups of allies going their own way.

For this reason, German Foreign Minister Heiko Maas is holding talks in Moscow and Washington in an attempt to find ways to counter the logic of escalation and preserve the international arms control regime. It’s very easy to throw cheap shots from the sidelines, but critics themselves are obliged to look long and hard at the alternatives and their foreign policy consequences. Are we really supposed to blindly follow Trump and Putin into a new cold war, or would it not be better to try everything we can to prevent an escalation – in spite of all the associated obstacles and uncertainties? Are we really supposed to continue adding fuel to the fire or would it not be more sensible to attempt to rise above the current spiral of mutual accusations, reproaches and prohibitions?

We are convinced that black-and-white thinking is simply unviable and that we need a policy that makes use of initiatives and formats that break down blockades and extricate us from dead ends. These are policies that would hinge on acceptance, a sober analysis of the status quo and a pragmatic policy of small steps designed to exit the current stalemate. The policies of Ostpolitik and Entspannungspolitik created by Egon Bahr and implemented by Willy Brandt in the 1960s and 1970s were exactly that.

Efforts relating to those historic policies were crowned with success. Today, too, German and European foreign policymakers would be wise to set out on a long-term and equally clear and pragmatic course in the direction of arms control, disarmament and détente.

We have various reasons for being interested in cooperating with Russia – just as Russia has an interest in cooperating with us. China is very aware of Russia’s economic weaknesses and undoubtedly exacts – unhindered – very favorable conditions vis-àvis access to the Russian market. These experiences have led to a fundamental sobering-up in Moscow. And this is exactly why it makes sense and is necessary to find common interests.

But this can only happen in concert with our European partners. Germany and the EU must continue to focus on cooperative multilateralism rather than egocentric unilateralism. The idea of integrating difficult partners into multilateral approaches does not reflect a lack of principles; instead, it is evidence of key insights into what is actually feasible and the fact that pressure alone will not bring about a change in behavior.

In addition, it is essential that we present a clear and coordinated European approach, especially when it comes to dealing with difficult partners. For example, the current debate regarding Nord Stream 2 underscores the necessity for a joint European energy policy. Any retroactive consequences for decisions already taken would only make this objective more difficult to reach. Moreover, they would counteract efforts made by the German government to secure and modernize the Ukrainian transit route.

German and European foreign policy must use clever diplomacy to nudge the two major nuclear powers – the US and Russia – into overcoming their dangerous silence. We are under no illusions: The Russian government will not change its internal or external course overnight.

The fact is that the principle of multilateralism is under enormous pressure – even within the EU. The goal must therefore be to make better use of existing institutions, to reform them and to fill them with new life – as we saw recently with the confirmation of the German-French partnership by way of the new Treaty of Aachen.

In spite of all setbacks and disappointments, we cannot let up in our efforts. We must stay the course, especially when things get difficult. Back in the day, if Ronald Reagan and Mikhail Gorbachev had allowed themselves to be discouraged by what was an even less favorable starting position, the INF Treaty would never have come to fruition in 1987.

Why don’t we take Moscow at its word and offer them new relationships and contacts to those institutions dominated by it, such as the Eurasian Economic Union (EEU) and the Collective Security Treaty Organization (CSTO)? This would have the advantage of regionalizing the conflicts of interest, thus ensuring that it wasn’t always Russia and the West that were at odds, but rather the EU and the EEU (Armenia, Belarus, Kazakhstan, Kyrgyzstan and Russia) and – under the umbrella of the OSCE – NATO and the CSTO (Armenia, Belarus, Kazakhstan, Kyrgyzstan, Tajikistan and Russia). Plus, we would be fulfilling Russia’s request for talks “at eye level.” Why are we not making even more use of the opportunities offered by the NATO-Russia Council and the OSCE?

However, we cannot allow all of our offers of cooperation towards Russia to lead to the West throwing its own principles overboard and accepting a new policy based on spheres of influence in Europe. The inviolability of borders and the prohibition of violence as the basis of international law and the guarantor of peace on the European continent are not negotiable.

Nevertheless, we must do everything in our power to prevent the post-Cold War era from coming to be known as the time between two cold wars. Germany and Europe must never again become the site of war games involving nuclear or conventional weapons. With this in mind, smart foreign policy cannot wait for democracies to exist everywhere; instead, smart policy proves its value by dealing with those who think differently.

ROLF MÜTZENICH and ACHIM POST
are deputy chairmen of the SPD parliamentary group in the German Bundestag. 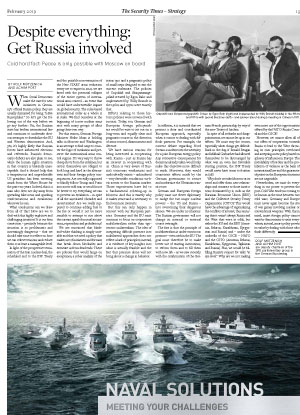