After the forever war 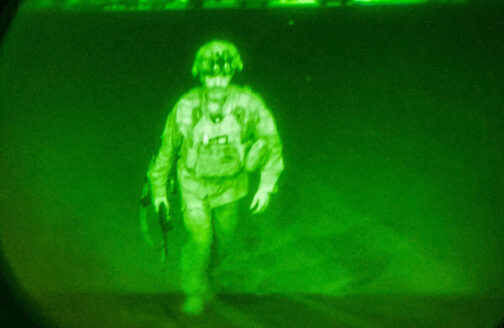 Since mid-August, the Taliban have once again taken full control of Afghanistan. Scenes of a chaotic NATO withdrawal, bungled evacuations and the failure of a twenty-year war effort are shaping Western perceptions.

For several days in succession, Zafar Hashemi* has made the trip to the passport office in Kabul to apply for new travel documents for himself and his family. The jostling in front of the building, located in the southwest part of the Afghan capital, has been the same for years. Hundreds of people stand in line, usually with one common goal: to get out of Afghanistan. Many of them have traveled all the way from other Afghan provinces specifically for this purpose. Even before the Taliban regained control, getting a new passport was an expensive endeavor. Passports alone cost roughly $70 to $100 per person. But then there’s the cost of bribing officials who otherwise won’t lift a finger and are wont to keep applicants waiting for weeks or even months.

For years, the Taliban have portrayed themselves as the enemies of corruption, always blaming problems on the Kabul government, which has now been overthrown (or rather, fled), and its Western allies. This narrative fueled their popularity in many regions of Afghanistan; after all, there was no question that the previous regime was corrupt. But little has changed at the Kabul passport office since the Taliban has returned. In fact, corruption has increased. “One of my relatives paid $600 for a passport a few days ago,” says Hashemi. “Others had to fork out up to $1,000. This is usury, especially in these times.” There are reasons for the current situation; demand is high and the corrupt officials who worked for the previous regime still hold the same positions. The new head of the passport office is a Talib, that is, a member of the Taliban. He recently returned from exile in Pakistan and by all accounts has little control of the situation. “We’ve fired several employees on corruption charges,” he claimed in a recent interview with an Afghan television station. “Anyone caught will face harsh penalties.” Hashemi and other Afghans don’t consider him trustworthy. “He’s either stupid and doesn’t notice what’s happening right under his nose, or he’s taking a piece of the pie himself,” says Hashemi.

Even so, corruption is likely one of the less pressing problems facing those living under the current Taliban regime. Immediately after the withdrawal of international troops, the insurgents – who already controlled numerous regions at the time – took over the entire country. The last-ditch effort to resist in the provinces of Panjshir and Baghlan and led – at least verbally – by Ahmad Massoud, son of the famous Mujahideen commander Ahmad Shah Massoud, who was killed by Al Qaeda in 2001, was quickly crushed. As soon as the last US soldiers left, the Taliban captured the airport amid a flurry of propaganda. They soon began to hold meetings and conferences in the same luxurious Kabul hotels they’d once sent suicide bombers to destroy. The old state apparatus was abolished, the white Taliban flag was hoisted – and many at-risk groups and individuals were left behind.

These included Samir, who once worked for the German armed forces as a local officer, and Mustafa, who served in the Afghan army. Their calls for help were ignored for months, even by Germany. And by the time the Taliban had reached Kabul, it was already too late. No one wanted to evacuate them. The two men hardly leave the homes anymore; they are afraid of revenge attacks. According to a report by the US organization Human Rights Watch, dozens of members of the Afghan security forces have been hunted down, tortured and killed by the Taliban in recent weeks and months – in spite of a general amnesty announced in August. The Taliban blamed the incidents on disloyal fighters and insisted the amnesty would remain in place at least as far as its leadership was concerned. But many observers find this explanation implausible and speak of a façade amnesty intended primarily to satisfy international donors.

After all, in economic terms, Afghanistan remains more dependent than ever. Due to the US sanctions in place since the Taliban’s return, the country is essentially in a state of free fall. Moreover, Afghanistan’s state reserves abroad, amounting to around $10 billion, were frozen by Washington until President Biden’s executive order of Feb. 11, which freed up $3.5 billion for a trust fund to provide humanitarian assistance to Afghanistan, and $3.5 billion for families of victims of the Sept. 11 attacks. Those suffering the most, however, are not the extremists, but the millions of regular Afghans. They are now being exposed to a potential humanitarian catastrophe that could cost more lives than the preceding 20 years of war. Responsibility for this state of affairs lies not only with the Taliban, but also with the elites who fled Kabul and with the countries that waged war in the country. Even after two decades, and despite billions of dollars in aid from abroad, nothing even resembling an economically sovereign state has been established. In many respects, the Western mission in Afghanistan was geared toward fostering a short-term war economy, and this ultimately served only to encourage the swamp-like corruption that already existed among political elites. If the international community now forgets about Afghanistan once again, the country will face the same isolation it suffered in the 1990s.

Should Afghanistan be isolated once again, the Taliban’s reign of terror will likely expand. There are signs that this is already the case, as evinced by reports of censorship and restrictions on freedom of the press and freedom of expression. “We’re already censoring ourselves,” says one journalist in the southeast of the country, who continues to live and work in Afghanistan and therefore wishes to remain anonymous. The country has been among the deadliest for journalists for years. The Taliban make no secret of the fact that many media outlets and journalists are a thorn in their side. While they court international media outlets and grant them protection, many local reporters continue to be helplessly exposed to the whims of the Taliban. Some have been threatened, arbitrarily arrested and tortured. The situation is similarly dangerous for women’s rights activists, who have suffered physical attacks after demonstrations protesting the closure of girls’ schools and universities. Some of these women have even been abducted and murdered by unknown perpetrators. At the moment, the situation varies from region to region, and some educational institutions are open to both boys and girls.  However, classes are more strictly segregated by gender than before. Female students and teachers don’t have to wear burqas, but they do have to veil themselves more strictly.

The Taliban claim to have nothing to do with the kidnapping and murder of activists, but their statements are anything but credible. After all, they’re now the only authority controlling the country. With the fall of the last Afghan government and the flight of ex-president Ashraf Ghani, the entire Afghan security apparatus, i.e., the army, police and intelligence services, also collapsed. Only the Afghan cell of the Islamic State group (IS) is causing the new Taliban regime any serious headaches. It is resorting to the very same means once part of the Taliban’s own repertoire – bombings and suicide attacks – to wipe out its targets, which include religious minorities, such as Shiites.

The Taliban count themselves among the arch-enemies of IS. This is perhaps one of the reasons why regional states wish to cooperate with the new, old rulers in Kabul. It is also why Western actors such as the EU and the US will likely soon find themselves doing the same.

*Names have been changed to protect the identities of the speakers

Emran Feroz is an Austro-Afghan journalist and war reporter born and raised in Innsbruck. His latest book, Der längste Krieg – 20 Jahre War on Terror (tr. The Longest War – 20 Years of the War on Terror) became a bestseller after the Taliban returned to power in Afghanistan in August 2021. Also in 2021, Feroz was awarded the Austrian Concordia Prize for Journalism in the human rights category. 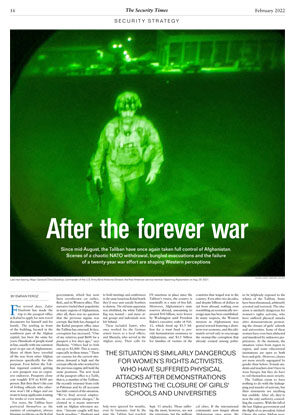