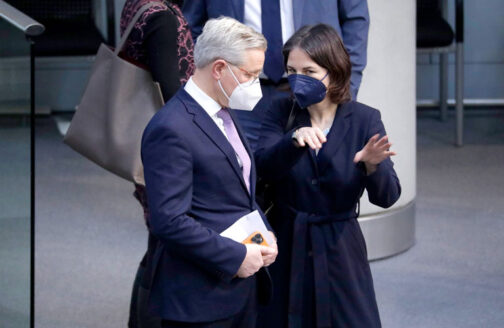 A change in Germany’s foreignpolicy mentality is long overdue.

For the first time in 16 years, the CDU/CSU finds itself in the opposition after a federal election. Observers abroad are now looking to see what course the new German government’s foreign policy will take. They are likely also curious to see how the CDU/CSU will position itself in foreign policy matters without Angela Merkel at the helm. Our basic position is clear: regardless of whether we’re in government or in the opposition, ensuring a responsible foreign policy for Germany and Europe will always be a central tenet of CDU and CSU activity. This means that ensuring reliability for our allies and responsibility toward our soldiers – who risk their lives to protect German security interests – will continue to be our priority, rather than any attempt to raise our party’s political profile.

But being in the opposition also means delivering sharp criticism, when necessary. It is now our political responsibility to hold a mirror up to the government when it takes unclear action, when it gives rise to doubts or appears contradictory. Still, we want to be more than just critics: Even in opposition, the CDU/CSU sees itself as a contributor to German foreign policy and is eager to cooperate. On the basis of our Christian Democratic compass – which is European, trans-Atlantic and multilateral – we’re keen on presenting our own perspectives and solutions. What does this mean in concrete terms with regard to the foreign policy challenges facing our country, Europe and the West? Allow me to highlight four fields of action and, in each case, outline precisely what foreign policy responsibility means for the CDU/CSU.

Due to the pressing nature of the current situation and the immediate threat to the European order, it’s only fitting to start with Europe and focus first on the conflict with Russia. Russian President Vladimir Putin has amassed 140,000 Russian soldiers on the Ukrainian border and set up supply lines designed to enable a military attack on Ukraine. In addition to having to withstand a steady flow of warmongering rhetoric, Ukraine finds itself under massive threat without itself posing any kind of threat to Russia. The CDU/CSU stands clearly by Ukraine, its territorial sovereignty and its right to defend itself. To be clear, it’s not NATO threatening Russia. What most threatens Putin’s authoritarian system in Russia is the desire expressed by the people of Ukraine – and other states neighboring Russia – for freedom, democracy, the rule of law and a market economy. Everything points to the fact that Vladimir Putin is determined to change Europe’s post-Cold War political order. He lacks the means to achieve this by leveraging the laws of attraction, hence his use of aggression. Europe’s lack of unity is currently the West’s greatest weakness, and this could be taken as an opportunity by Putin. In this crisis, Western unity is the prerequisite for a credible policy of deterrence that can prevent violence and pave the way for political solutions. From the point of view of both Washington and Moscow, in Europe, everything depends on Germany. For this reason, it is imperative that we form part of a unified Western deterrent. These efforts will be measured by our willingness to link the future of Nord Stream 2 to Russian aggression. The pipeline can have no future if Russia attacks Ukraine.

The Russia crisis has revealed Europe’s greatest weakness. We have not yet succeeded in speaking with one unified voice, nor have we become capable of taking action in a unified manner. We now must reproduce abroad the unity we’ve achieved internally with the single market. As Europe’s largest economy, Germany plays a decisive role in this process. If varying interests prevent a European foreign policy with the support of all member states in the foreseeable future, then Germany should join with like-minded states and begin to shape a common foreign policy. In a world of dramatic geopolitical change, we cannot afford to remain powerless in the realm of foreign policy. The West’s failure in Afghanistan demonstrated quite clearly the consequences of our impotence. In the same way that our European and international partners ask that Germany take responsibility and engage in concrete action, so, too, do our own values and interests call on us to step up to the plate.

Germany and Europe taking on more responsibility is also the basis for the urgently needed restructuring of trans-Atlantic relations. Even under President Biden, the US is no longer prepared to bear all the costs alone. The focus of US foreign policy has also shifted and is now geared towards China and the Asia-Pacific region. This goes hand-in-hand with the fact that US involvement in other regions, such as the Middle East, is ebbing. As Europeans, we should not be passive bystanders; we should insist to the US that we share the burden. After all, it’s our neighborhood; it’s where we ourselves must become more involved. Unlike the US, we cannot detach the security and stability of our own societies from the security and stability of this region. When there are fires in the Middle East and hunger and desperation in Africa, people will leave their homelands and come to us. It is in our immediate interest to tend to crises in these regions.

Restructuring the trans-Atlantic partnership also means working to tackle new issues. For example, it would behoove us to use the Biden presidency and his commitment to environmental issues to pursue a much more engaged foreign climate policy together with the US. We must first show that sustainable growth and climate protection are not opposites but actually the only economic model that can lead us to future success. We must provide proof of this. Drawing on this, it should then also be our goal to take climate protection to those locations where CO₂ emissions are rising rather than falling.

China as the biggest foreign-policy challenge

Trans-Atlantic cooperation is needed not only in the realm of security and climate issues. The greatest common foreign policy challenge facing the West is China. Under the leadership of Xi Jinping, the country is determined to upset the rules-based international order in favor of Chinese interests. This determination is rooted in the conviction that his own authoritarian system is superior to the West’s liberal model. Not only does China possess enormous economic, technological and political means to reach its goal, it also has the will to achieve it. The resulting battle-of-the-systems is being waged, above all, in the realm of technical leadership. And in that arena, the only way for Europe to hold its own is to work in unison with the US. This is why it’s so important that we first coordinate at the European level and then at the trans-Atlantic level on our way to achieving a joint China strategy.

The CDU/CSU is keen to lend a helping hand to the new German government. We are determined to tackle these enormous foreign policy challenges cooperatively for the benefit of Germany and Europe. We are aware that the process of taking on responsibility will require a change in mentality on the part of Germans. Foreign policy in our new era must be explained and justified in terms of its goals and instruments. Only then will it be possible to execute it with success.

Norbert Röttgen is a member of the German Bundestag and the leading foreign policy expert of the CDU/CSU, Germany’s largest opposition party. 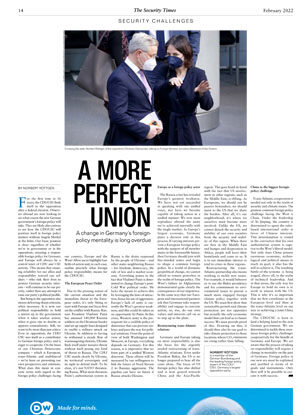