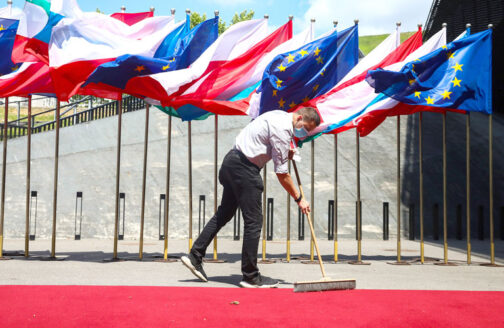 How will Central Europe react to Russian aggression against Ukraine?

After 1990, it seemed that all was right with the world. With the demise of the Soviet Union and the Warsaw Pact, the hitherto semi-sovereign states of Central and Eastern Europe were given the opportunity to determine their own security policy interests. And their choice was clear: They wanted to join NATO and the EU and drop the Brezhnev Doctrine, which had chained the region to the Kremlin in a Moscow-controlled zone of influence. Any democratization at home would only be able to succeed if the former satellite states no longer had to fear Russian imperialism, which had been equally virulent before 1917 and 1945, not infrequently in a conflict-ridden alliance with Prussia/Germany.

Today’s situation is more complicated. The Baltic states most threatened by Russia (Estonia, Latvia and Lithuania) understand the gravity of the crisis; like the UK and US, they profess to want to supply defensive weapons (such as Javelin systems) to Ukraine. The security policies of the other countries in the region, however, are no longer so clear-cut, as can be seen in the example of the Visegrád Group (Czech Republic, Hungary, Poland and Slovakia).

Hungary is a prime example of one of the Kremlin’s “Trojan horses” (Mitchell Orenstein/ Daniel Kelemen). Hungarian Prime Minister Viktor Orbán’s recent visit to Russia provided evidence of this. It was not his first visit, and Hungary had already criticized the EU sanctions levied against Russia in 2014, and had thwarted the EU’s search for consensus vis-à-vis Putin’s Russia. The focus was always on cheap gas and cheap loans, but it was also about old scores with Ukraine. For example, in 2018, the Hungarian consulate in Berehove, in western Ukraine, issued Hungarian passports to Ukrainian citizens, a blatant violation of Ukrainian law and a pro-Russian provocation, as Ukraine does not recognize dual citizenship. Orbán sought shelter in Moscow from the criticism emanating from Washington and Brussels regarding Hungary’s democratic decline; and in the Trump era, Hungary moved closer to the autocrat in the White House. Regardless of Putin’s radicalization, Hungary continues today to block cooperation between NATO and Ukraine. In exchange, Moscow grants Budapest special prices for gas and hands out cheap loans and Russian technology for the expansion of the nuclear power plant in Paks. The fact that Hungary currently receives Russian gas at roughly 20 percent of the market price provides ideal campaign ammunition shortly before the decisive parliamentary elections in April 2022.

Orbán is servicing Putin’s unmistakable intention to divide the EU. In doing so, the Hungarian leader is contributing to the erosion of European sovereignty. Signs of this are also apparent in other Visegrád states. For example, the Czech political elite are divided on Russia. The fact that Trojan horses can also come in the form of individual domestic political actors is already evident in the fatal example of Germany’s ex-Chancellor Gerhard Schröder. Similarly, the current president of the Czech Republic, Miloš Zeman, is a staunch supporter of Putin (and, incidentally, a big fan of Donald Trump). Among other things, Zeman’s fractured relationship with the Czech constitution and the involvement of his disciple Andrej Babiš, who was prime minister until 2021, in kleptocratic networks have brought him closer to Moscow. Recently, for example, it emerged that important investigative documents regarding a 2014 ammunition depot explosion in Vrbetice had disappeared from the armored cupboards of the presidential office, presumably because Zeman had them shredded. Czech investigators suspect that the Russian military intelligence agency GRU was behind the explosion, as the ammunition was destined for Ukraine. The prosecutor’s office, which, after the change of government in Prague, broke away from the old boy network peopled by the likes Zeman and Babiš, is investigating the mysterious disappearance of these documents.

A similar split in other countries in the region can be observed. At the end of January 2022, Croatian President Zoran Milanović, the former prime minister from 2011 to 2016, threatened to withdraw his country from NATO in the event of an escalation of conflict between Russia and Ukraine, which he blamed not on Putin but on NATO, the US and the UK. According to Milanović, Ukraine is “one of the most corrupt countries in the world” and should not be admitted to NATO, although this isn’t even up for debate at the moment. He also argued that a confrontation with Russia should be avoided at all costs in view of rising gas prices. Shortly thereafter, Croatian Foreign Minister Gordan Grlić Radman rejected these remarks, saying that the president was speaking only for himself and not for the country.

In Slovakia, where Russian propaganda via social media is particularly strong and effective, Robert Fico and his SMER party are among Putin’s most important friends. The ex-prime minister was driven from office for his involvement in corruption networks and mafia-like groups. Today, as one of the opposition leaders, he is campaigning with radical right-wing parties for early elections and has expressed his intention, if successful, to ban NATO troops from Slovakian territory. His actions illustrate how right-wing populists are taking advantage of the moment and the situation relating to the Ukraine crisis in particular. It is also clear that Putin not only wants to block the accession of new countries to NATO, but also to remove longstanding member states from the alliance. In contrast, Slovakia’s liberal President Zuzana Čaputová has taken the opposite position, blaming Russia for the escalation of the conflict with Ukraine and insisting on the presence of NATO in Slovakia.

Poland provides a very interesting special case. Back in 2014, the country was one of the most diplomatically active countries in the Russia-Ukraine war; it supported Ukraine with loans; the Polish foreign minister traveled to Kyiv with his German and French counterparts in the “Weimar Triangle”; and foreign policy coordination between Berlin and Warsaw was still working well. The idea was to give Ukraine a shot at national self-determination and democracy building, against kleptocrats like Viktor Yanukovych, who sought to secure Russia’s influence in the country. Today, the Polish government is driving a hard-line anti-EU course, which is now taking on anti-Ukrainian overtones. Indeed, the post-WWI/pre-WWII Polish nationalism on which PiS draws in its conflict with the EU was not only anti-German and anti-Russian, but also anti-Ukrainian, but this could change in the current crisis. As an openly pro-Russian position in Poland is hardly possible, and the security situation in Poland is just as precarious as in the Baltic states, the Russia-critical rhetoric remains while the PiS proceeds in pursuing an anti-Ukrainian foreign policy.

Two observations serve to illustrate this trend. First, the PiS government waited a very long time before addressing the seriousness of the situation in public, despite the fact that Poland would be directly affected by the conflict, for example, as a result of a new wave of refugees from Ukraine. Contrary to the custom up until that point, there were also no consultations between the defense ministries in Warsaw and Kyiv, as the Ukrainian defense minister indicated in an interview. It was only after pressure from public opinion, the Polish opposition and NATO partners grew that the PiS government decided to deliver ammunition to Ukraine. Second, in January 2022, Polish Prime Minister Mateusz Morawiecki traveled to Madrid – in the midst of the brewing conflict – to meet with Europe’s predominantly pro-Russian right-wing populists. They included France’s Marine Le Pen, whose previous election campaigns were financed by Russian banks, and Santiago Abascal of Spain’s Vox party, known among other things for his attempts to rehabilitate the Franco dictatorship. An information portal critical of the government in Poland already counts Morawiecki among the “Putintern,” which the portal describe as a new “international” that designates Ukraine and Belarus as belonging to the “Russian world” and wants to reverse the dissolution of the Soviet Union under the banner of a neo-Slavophile ideology.

Separate signals came from recent diplomatic initiatives in Central Europe: Poland’s Foreign Minister Zbigniew Rau, as chairman of the Vienna-based OSCE, initiated a “Renewed European Security Dialogue” designed to force Russia to reveal its colors by making use of the organization’s unanimity principle. Warsaw also revived the “Weimar Triangle” with Berlin and Paris in an attempt to foster parallel progress. At the same time, the “Austerlitz Format” was also renewed, in which Vienna, Prague and Bratislava declared that Ukraine’s security was their business, too, and announced the delivery of Czech artillery shells. The Ukraine crisis acts as a catalyst, whether this involves accelerating the progress of the Visegrád states along the Western path or pulling them back into the instability of an interim situation.

Ireneusz Paweł Karolewski is professor of political theory and democracy studies at the University of Leipzig. Claus Leggewie is Ludwig Börne Professor at the Justus Liebig University of Giessen (JLU) and initiator of the JLU’s Panel on Planetary Thinking. 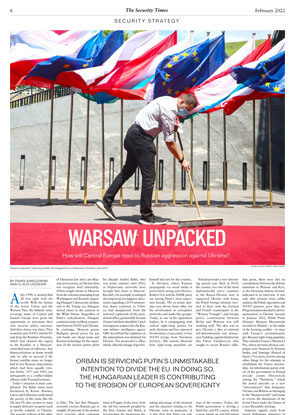