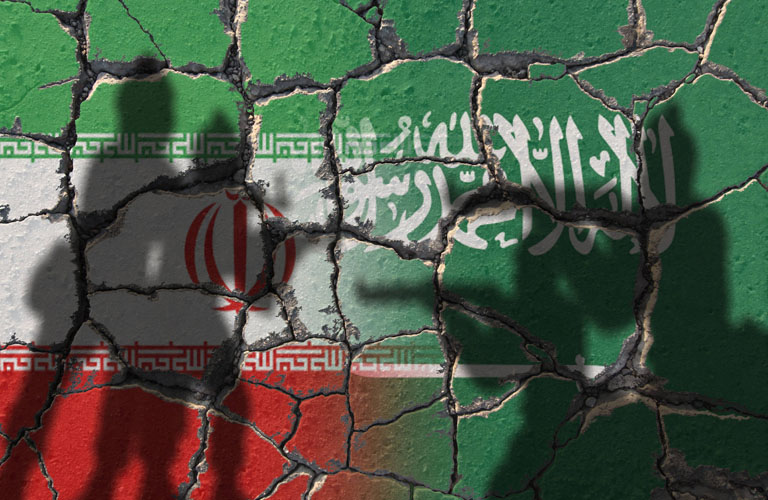 As The New York Times reported in November 2018, the United States and Saudi Arabia have apparently reached a framework agreement for the sale of nuclear power stations to the Kingdom. The deal is said to be worth up to $80 billion. However, Riyadh is insisting on creating its own nuclear fuel, despite it being cheaper to buy abroad.

There can only be one plausible reason for this pursuit of uncontrolled uranium enrichment. Accordingly, US intelligence officials are increasingly concerned with the question of whether Crown Prince Mohammad Bin Salman, the gulf state’s de facto autocrat often referred to as MBS, is planning to build a Saudi atomic bomb.

Those responsible in Washington or Israel do not seem overly concerned by the prospect; in any case, they are doing nothing to challenge the deal. Likewise, the political and media establishment’s indignation over the murder in Istanbul of the Saudi dissident Jamal Khashoggi – an act most probably endorsed, if not ordered, by MBS – has had next to no effect. Still, a clear bipartisan majority of US senators voted twice at the end of last year to limit President Donald Trump’s authority in the war in Yemen. Although this nearly four-year-old war, which Mohammad Bin Salman could never have waged without the military assistance of the US and the United Kingdom, has unleashed what the UN considers the greatest humanitarian crisis in the world, the protest votes by the US senate have had absolutely no consequences; a change in US policy toward Saudi Arabia is not to be expected despite the Khashoggi murder. The Saudi monarchy is appeased, and, in turn, continues to demonize the Iranian theocracy – a stark world view with sober geopolitical underpinnings.

Close American-Saudi ties date back to World War II, for which the meeting between President Franklin D. Roosevelt and the kingdom’s founder, Ibn Saud, on Feb. 20, 1945, aboard the USS Quincy on Great Bitter Lake near Cairo would later assume great symbolic value. Saudi Arabia has since delivered petroleum to the US under preferential terms, and the US has returned the favor by guaranteeing the Saudi monarchy’s security, primarily in the form of enormous amounts of arms exports – nearly 10 percent of all US arms sales go to Saudi Arabia.

Weapons for oil – this is one pillar of the special relationship between the two sides. Another dates back to the 1980s, with the triumph of financial capitalism and Saudi investors’ discovery of the American market. There remains not one publicly owned US company without Saudi capital. While the exact level of Saudi investment in the US market is unknown, the figure is thought to be in the hundreds of billions of dollars.

And, finally, there is the decadeslong cooperation between American and Saudi intelligence services, which bore fruit during the Iran-Iraq war (1980–1988) as well as during the Soviet occupation of Afghanistan (1979–1989). At that time, the Saudis were providing considerable financing to the Mujahideen, the religious fighters deployed as guerrilla troops to fight the Soviets. The Mujahideen would later spawn the Taliban and Al Qaeda – a fact the Washington political establishment is all too happy to overlook. That Saudi Arabia exports not only petroleum, but Islamist terror as well, must have been a painful realization for Americans on Sept. 11, 2001 – 15 of the 19 assassins came from Saudi Arabia. The consequences? None.

Yet another reason for the United States’ unwillingness to rock the boat is the common regional archenemy it shares with Saudi Arabia and Israel: Iran. This triangle – or perhaps square, if the United Arab Emirates is thrown into the mix – considers the Islamic Republic to be nothing less than an empire of evil. They all dream of a regime change in Tehran, if necessary by military means. Washington and Israel above all are convinced that Iran is seeking to annihilate the state of Israel. Moreover, Tehran exercises a brand of power politics that leaves the US allies of Riyadh and Abu Dhabi feeling under threat.

The Iranian government has indeed engaged in an increasingly aggressive anti-Israeli polemic. For the sake of balance, it should be noted that the Israelis, particularly under Prime Minister Benjamin Netanyahu, have seldom endeavored to temper their rhetoric vis-àvis Iran. But can the Islamic Republic actually “annihilate” Israel, even if its current leadership actually desired to?

Strictly speaking, this would be impossible for two critical reasons. First, Israel has the atom bomb and Iran does not. The Israelis share no information on their nuclear potential and, in contrast to Iran, are under no pressure to embrace any significant transparency on the matter. Estimates of Israel’s capacity range between 75 and 400 atom bombs, which puts them in a league with the UK and France. Iran possesses no nuclear weapons and in 2003, as confirmed by US intelligence, ceased all attempts to acquire them. A country without the atom bomb is simply incapable of “annihilating” a country that has them. It is objectively impossible.

The second reason calls for a look at respective military budgets. In 2017, Iran had a military expenditure of $14 billion, Saudi Arabia $70 billion, Israel $58 billion and the US $750 billion. The numbers speak for themselves. The suggestion that Tehran is pursuing an expansive program of power politics is – in light of US hegemony in the region since World War II – laughable. It is true that Iran understands how to exploit the mistakes and shortsightedness of American policies for its own purposes. In 2001, Washington toppled the extremist Sunni Taliban regime in Afghanistan, the archenemies of Shi’ite Iran. Two years later saw the US-led invasion of Iraq and the demise of Saddam Hussein, which was followed by Iraq’s Shi’ite majority population claiming power from the Sunnis. The new Shi’ite power elite in Baghdad soon allied with their equivalents in Tehran: Who would have thought it? In each case, Washington did Iran a huge favor.

The attempt to effect regime change in Damascus – a policy promoted primarily by Hillary Clinton and the neocons and then thwarted by President Barack Obama – was an unconditional failure.

Bashar al-Assad remains in power and his military allies in Iran and Russia have been strengthened as a result. But Syria remains in a state of unrest, as Israel and Iran are engaged there in a proxy war of sorts. At the same time, foreign policy decision-makers in Washington are using all possible means to attempt to thwart Trump’s decision to withdraw US troops from northern Syria. The idea of negotiating with Russia and Iran to come to an agreement on a balance of interests in the region feels to them like treason. A dangerous worldview – on Jan. 13, The Wall Street Journal reported that last September, after three grenades exploded in the vicinity of the US embassy in Baghdad, National Security Advisor John Bolton instructed the Pentagon to work on options for taking military action against Tehran. Nothing is known about the perpetrators of the attack, which caused no injuries or damage of any kind. But why worry about facts when it comes to cracking down on Tehran?

There are many good reasons to criticize Iranian policy, but despite all the repression in the Islamic Republic, societal conditions in the country are far more complex, multifaceted and, indeed, liberal than in Saudi Arabia. Power lies in Tehran, not in the hands of a single individual, as in Riyadh. And the Iranian authorities, like it or not, act far more rationally and predictably than MBS. Why then does the Islamic Republic sit squarely in the crosshairs of Washington and its regional allies?

Iran is the sole remaining country in a wide stretch of land between the Atlantic in the west and Indonesia in the east (with the exception of the little that remains of Syria) with a political system that is neither pro-Western nor pro-American. This, in turn, has causes that go back decades. In 1953, the CIA and MI6 overthrew the democratically elected and extremely popular prime minister of Iran, Mohammad Mossadegh. Two years earlier, he had nationalized the Iranian oil industry – blasphemy in the eyes of London and Washington. In his place they installed as shah, or sovereign of Iran, Reza Pahlevi, also a close ally of Israel. But the repressive policies of his regime led to the Iranian Revolution in 1979. Nary a historian believes that we would have an Islamic Republic today had Mossadegh not been deposed – it is the radical answer to the coup a generation hence.

But who in politics, whether in Washington or elsewhere, thinks in historical contexts? The Trump administration is hardly the only Western government to see Iran as the last remaining rogue nation, now that the neocons and their allies have instigated regime change in Afghanistan, Iraq and Libya.

Their attempts to do the same in Syria have failed – see above. Trump’s May 2018 termination of the Iran nuclear deal forged under Obama in 2015 is the first step toward his goal of Regime Change 2.0 in Tehran. Although the pact’s European co-signers, along with Russia and China, want to continue to adhere to the terms of the deal, the idea has little appeal for the ideologues of America First, also known as the gravediggers of the trans-Atlantic alliance.

Prior to a potential attack of Iran by the US and/or Israel, insurgency financing of ethnic and religious minorities in Iran as well as economic sanctions should be maximally employed to bring Tehran to its knees. (Despite its arms expenditure, Saudi Arabia is still militarily a paper tiger.) And Iran’s ballistic missiles are a thorn in the eye for Washington and Israel, as they can jeopardize the safety of attacking aircraft. The presence of Shi’ite militias in Iraq and Syria is particularly unacceptable for Israel, and the same can be said for Iran’s support of Hezbollah in Lebanon. For the Iranians, however, the focus would be on an asymmetrical preemptive defense in the case of an attack.

A peaceful alternative to negotiations with Tehran and the retention of the nuclear deal does not exist. Although the regime sits firmly in the saddle, pressure from the Americans is strengthening the hand of the hardliners at the expense of the pragmatists around President Rouhani. An attack on Iran would bring Armageddon to the Middle East. The entire region would explode: Jews against Muslims, Shi’ites against Sunnis. And what if Russia and China were to come down on the side of Iran, against the US? Would it trigger NATO’s Article 5 on collective defense?

MICHAEL LÜDERS
is a German Middle East expert, frequent talk show guest and co-owner of the Middle East Consulting Group. His most recent book Armageddon im Orient came out in 2018. 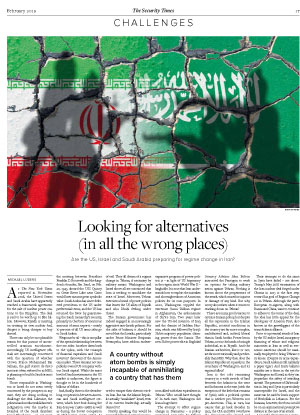