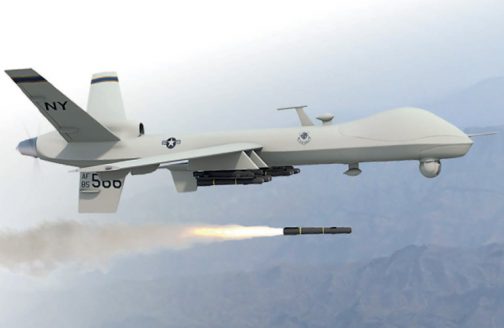 Conventional warfare tactics, traditionally maintained through rifles and tanks, artillery, and fighter jets, is now centered on the rapid innovation and advancement of IT, artificial intelligence (AI), avionics and cyber technology in developed countries. The battlefield is expanding to five dimensions – ground, sea, air, space and cyber. However, the South Korean military faces a triple handicap. Thus, without technical innovation, it will be difficult to maintain its combat power.

The first of Korea’s handicaps is its surrounding conditions. The Korean Peninsula has achieved stabilization following the Cold War era, but there are indications of another potential clash between land powers such as China and Russia and sea powers like the United States and Japan.

Secondly, the threat posed by North Korea has increased. The North boasts an immense conventional force of 1.2 million soldiers and is becoming an actual nuclear state.

Thirdly, South Korea faces a steep “demographic cliff,” and a decrease in its number of troops is inevitable. Thus, the South Korean military is expected to shrink from its current level of 620,000 troops to 500,000 by 2022. While the decrease in manpower has little influence on the navy and air force, the biggest burden will fall upon the 483,000- strong army, which will soon be reduced to 365,000 troops. The South Korean military, especially the Army, will not be able to cope with the changing military structure and potential future threats unless it seeks innovation through drones and automation.

Although the South Korean military has pushed for defense reform since the late 1990s, it has repeatedly failed due to changing administrations, the 1997 Asian financial crisis and instability resulting from North Korea’s frequent military provocations. But a current sense of crisis is pushing the South Korean government and the military toward speedy reform. The development of drones and IT technology has caused the South Korean army to establish a drone combat unit. General Kim Yong-woo, the South Korean Army chief of staff who assumed the post last year, intends to change the structure of the Army and shift to new warfare tactics based on technology. The Moon Jae-in government is backing this concept.

The US and Israeli armies were the first to deploy unmanned aerial vehicles (UAVs) for military operations and have experience in developing norms and rules of engagement for their use. The US military has actively used drones in Afghanistan and Iraq in efforts to eradicate terrorist forces including al-Qaeda and the Taliban. Israel was the first country to use a drone militarily and is still plays a leading role in the development of weapon zed drones. During a prolonged period of joint military exercises with the US, the South Korean military has observed the US army’s deployment of drones and learned how to use them in combat. It also received technological support from Israel when it first developed its own weaponized drones. Even now, many South Korean companies in the defense industry develop military drones through technical cooperation with Israel.

The South Korean Army currently operates the RQ-101, or Songgolmae (wingspan: 6.4 meters), developed through its homegrown technology in 2000, along with Israeli-made Searcher IIs, while some Army corps have deployed Israel’s Heron drones. While the division level commands the KUS-9 drone (2014), the regiment level uses the RemoEye-15 (2004) and the RemoEye-006 UAV (2006) was developed and deployed at the battalion level. Defense reforms emphasizing drone warfare could expand the operational area of corps and divisions by a factor of three to four in the future. This would also enable network-centric warfare based on a drone system.

Furthermore, carrying out the Kill Chain pre-emptive system operations to strike down North Korea’s ballistic missiles in near real-time now requires raising the reconnaissance capabilities of forward units in a groundbreaking manner. The Army corps also needs a next-generation drone to replace the Songgolmae. On the division level, an indigenous version of the existing KUS-9 drone must be developed and the RemoEyes replaced. The Agency for Defense Development (ADD) will soon complete development of a MALE (medium-altitude long-endurance unmanned aerial vehicles), which is similar to the US MQ-9 Reaper and, aside from basic reconnaissance capabilities, could carry air-to-ground missiles like the AGM-114 Hellfire.

Miniature drones on par with America’s WASP UAV are in the works. They will be deployed to the new “decapitation” special forces unit established last year by the South Korean Army. These micro drones provide intelligence on targets to the air force and ground troops. Moreover, the Northrop Grumman RQ-4B Global Hawk will be introduced in 2018 to conduct surveillance over the vast territory of North Korea.

In addition to the UAVs, the South Korean Army currently plans to make use of a dog-horse robot developed by the defense ministry with some $43.34 million invested from 2006 to 2012. This robot is capable of autonomous navigation along a set route, short-distance surveillance and reconnaissance, as well as mine detection. The army established a dronebot military research center in January 2018. A pilot-scale drone combat unit will enter service this year. Drones can conduct reconnaissance and execute strikes, while in the long term robots can be tasked with search missions.

The Army also installed a scientific boundary system south of the demilitarized zone (DMZ). Its high-performance surveillance cameras and optical fiber network automatically alert the situation room when infringed upon, allowing immediate military reaction. Once this new boundary system is fully operational, the number of soldiers stationed in the area can be decreased drastically. Even blind spots along the inter-Korean border will then be effectively monitored.

When taking into consideration the demographic cliff, threats from North Korea and China, and the harsh reality of the need for defense reform, the build-up of a drone and robot system in South Korea becomes a realistic prospect. Korea’s drone and robot technology is nearing 80 to 85 percent of the level reached by the highly advanced countries like the United States. Setting up a drone army will be facilitated by South Korea’s industrial prowess in such fields as materials and battery technology as well as electronics and communications technologies.

KIM MIN-SEOK
was a researcher at the Korea Institute of Defense Analyses from 1982 to 1994 before becoming a journalist. He was spokesman for the South Korean Ministry of National Defense from 2010 to 2016. He is now a military and security expert as well as opinion columnist for the Korean daily newspaper JoongAng Ilbo. 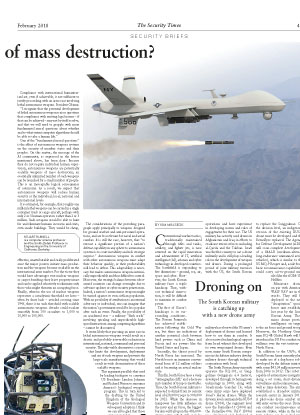