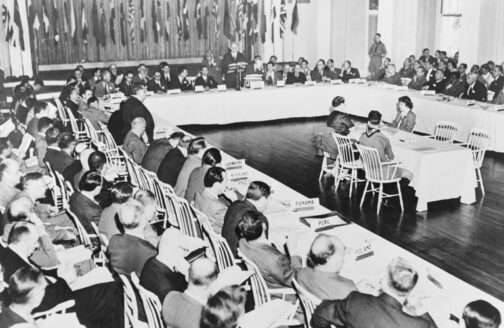 Speaking at the Bretton Woods conference in 1944, US Secretary of the Treasury Henry Morgenthau eloquently declared: “Economic aggression can have no other offspring than war. It is as dangerous as it is futile.” His speech reflected an understanding shared by many at the time – that peace and prosperity were indivisible. Many of the multilateral institutions, built in the aftermath of World War II, thus aimed to reduce the risk of economic warfare. The world of today, however, has generated a new set of problems, which our existing multilateral institutions are poorly equipped to deal with: most prominently, the weaponization of interdependence. It derives from the increased opportunities available to states to use economic instruments for geostrategic purposes.

Admittedly, the use of economic statecraft goes back to ancient times, and includes sieges and blockades. But in recent years, a new phenomenon has emerged, which Henry Farrell and Abraham Newman call “weaponized interdependence.” Farrell and Newman focus on the interactions between network structures, state power and global supply chains. They demonstrate that at least in certain key areas, network structures have turned out to be highly asymmetric, giving some states disproportionate power to leverage their unique positions on network hubs in an attempt to coerce others. The fact that production is integrated through global supply chains means that some states can use their dominant network positions to extract informational advantages vis-à-vis adversaries. Moreover, they can cut adversaries off from network flows. Farrell and Newman focus on the ability of the US to control financial transactions and internet flows. But we see other actors also recognizing the potential to exercise control in other sectors, such as China’s “Made in China 2025” roadmap on integrated circuits and semi-conductors.

Farrell and Newman’s logic on weaponized interdependence refers to the power that is embedded in networked structures of global production. At least one reason why their argument deserves more attention in current thinking on multilateralism is as follows: The very economic integration that international organizations like the World Trade Organization (WTO) were supposed to promote may turn out to be a source of greater power asymmetry and conflict. This structural logic can be supplemented by two further arguments, one referring to the differences in domestic political systems, the other to adversarial intent.

The configurations of some domestic institutions may allow states sitting on network hubs to exploit their positions more easily than others. This is precisely the complaint that President Donald Trump’s team has voiced most vociferously to China, but previous US administrations and other trading partners have levied similar objections. Multiple actors have protested against China’s ready use of subsidies, domestic content requirements, intellectual property rights violations, forced technology transfers and other means to secure an advantage in trade. And they ascribe blame not only to the Chinese government, but also to the WTO, which has seemingly turned a blind eye to China’s violations of the spirit of the law, if not the law itself. The fact that China’s meteoric rise has occurred in large measure as a result of the opportunities the multilateral trading system has offered it makes the “unfair” practices all the more galling.

There is also the issue of potential adversarial intent. China’s adventurism in South and Southeast Asia has given many in the region cause for concern. Its Belt and Road Initiative is attracting growing skepticism, even from recipient countries; its human rights record in Xinjiang has many activists in the West concerned; and Huawei’s forceful and successful 5G campaign in many countries has awakened Western companies to the security risks that such investment can pose.

The postwar multilateral economic system was built to handle quite a different set of problems. It assumed some amount of like-mindedness and shared purpose among all members; increasing economic interdependence and shared prosperity could then strengthen and deepen these pre-existing affinities. The bifurcation of the system during the Cold War benefited those countries with a liberal, democratic and mixed-economy orientation. It was this group that shared the gains of international cooperation, while the Soviet bloc stood outside the system. At the end of the Cold War, a combination of liberal naïveté and liberal hubris led many researchers and practitioners to expect an increasing confluence of interests on the part of the newcomers into the system. That some actors could use the economic gains the system helps them accrue for geostrategic ends – and that they could cut into systemic rivals by successfully gaming their opponents’ system – had simply not been factored in.

The crudeness of Trump’s “America First” rhetoric and his angry tweets reviling the international system make it all too easy to overlook the gravity of the dangers posed by the weaponization of interdependence – especially by systemic rivals. The WTO, for example, does not yet have instruments to contend with this phenomenon. Even minimal attempts to facilitate greater transparency on “general economic support measures” in the WTO’s Trade Monitoring Reports have encountered resistance by members. Yet a major revamping of the rules is necessary. This will have to include an updated understanding of state-owned enterprises, subsidies as well as special and differential treatment for developing countries. Moreover, it will require a fundamental change in the mindset of an organization that has always stood for trade liberalization.

For example, a reformed WTO would have to recognize and specify a wide range of conditions in which protectionism might be considered legitimate, particularly to counter economic measures that countries may have instituted for security purposes. Some areas may need to be cordoned off from trade liberalization entirely – such as digital technologies that have direct security implications.

At a minimum, such constraints would result in some level of decoupling from China and potentially others. But such decoupling is already underway as major players – including the US and China – seek greater self-sufficiency in critical sectors. Doing this within a reformed system of multilateral rules could help make this process less haphazard, less unpredictable and less costly. Without a doubt, decoupling – even if well-managed – will generate economic costs for most players, but these economic costs could be balanced by security gains.

There is a rich discussion currently underway on the reform and rejuvenation of multilateralism. To its credit, Germany, often working in close cooperation with France, Canada and others, has taken a lead in this debate. Surprisingly, however, this debate seems largely to be premised on old-school notions of mom, apple pie and economic interdependence. If multilateralism is to be made meaningful again, our leaders are not going to be able to avoid the question of how they plan to manage a much nastier world where interdependence is weaponized. This will occasionally and inevitably draw them into controversies about the values they stand for, and the allies that share these values with them. It will require them to take sides. This, in turn, will produce further decoupling, but will likely make for a limited yet more resilient multilateralism of the like-minded.

AMRITA NARLIKAR
is president of the GIGA German Institute of Global and Area Studies and a professor at Hamburg University. 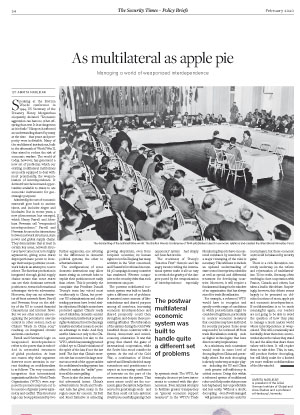