Wolfgang Ischinger is chairing the Munich Security Conference for the last time in 2022. Hats off to a dyed-in-the-wool German diplomat.

What times they were, what incredible experiences, what achievements, what a legacy. Wolfgang Ischinger’s career spans entire epochs of contemporary history: the Cold War, its end culminating in German unification, the hope for a lasting peace, the subsequent disappointments and, finally, globalization and its new – or maybe not so new – conflicts.

Wolfgang Ischinger, who will chair the Munich Security Conference for the last time this February, has been an exceptionally influential figure in German, European and global politics and diplomacy. He has served as a leading government official, an ambassador, a policy advisor, an organizer, a host with an affinity for the arts and a much-sought-after commentator on politics and current affairs. But above all, he has been – and will always be – a person who enjoys bringing people together, if not as friends, then at least to break bread and engage in dialogue. This requires a great deal of ambition – and chutzpah – along with the ability to endure slings and arrows from all sides. But most of all, it requires having the ability to see crises as challenges and challenges as opportunities; one must be able to abandon conventional certainties and well-trodden paths in favor of creative solutions and new ways of thinking.

In retrospect, it looks as if Ischinger might have been fulfilling his calling from the very beginning. Born in 1946 in Baden-Württemberg, he lived for a time as an exchange student in the United States, completed a law degree in Bonn and Geneva, then went on to study international law and global economic relations at Harvard. It’s likely that the brief time he spent as a young man in 1970s New York working in the cabinet of then-UN Secretary-General Kurt Waldheim proved influential in prompting him to think in global political terms. In 1975, he joined the German Foreign Service, working in Bonn under Foreign Minister Hans-Dietrich Genscher (FDP). Policy planning was one of his duties there, and he soon found himself working in immediate proximity to Genscher – as personal advisor and then as head of the Parliament and Cabinet Division. Notwithstanding the political indeterminacy embodied in the term “Genscherism,” the foreign minister was a mentor to Ischinger. His most important lessons learned were to always leave one’s interlocutor a way out and to never commit oneself in such a way that excludes potential solutions other than the ones initially agreed upon. The notion of tertium non datur (no third possibility given) had no place in Genscher’s teaching, at least not at the heights of diplomacy.

Ischinger was not the only member of Genscher’s close professional circle to become Staatssekretär, or deputy foreign minister, in Germany’s Foreign Office, even after the FDP stalwart was no longer head. This of course has a lot to do with the particular customs of that body: party loyalties (or their suspected presence) in the Foreign Office don’t carry the same weight as they do in other ministries. Joschka Fischer from Bündnis 90/Die Grünen would also capitalize on Ischinger’s considerable experience, some of which was gained during his involvement in the Dayton Accords, the peace agreement for Bosnia and Herzegovina he negotiated together with Richard Holbrooke, the US special envoy for the Balkans. Ischinger’s role in those talks was greater than the actual influence levied by the federal government in Bonn. Holbrooke was known for making rather lofty appearances as US ambassador in Bonn – as is the wont of the representative of a global power – and legend has it that Ischinger hosted a farewell dinner for Holbrooke, where he handed the black-red-and-gold German flag as a memento to the American.

From 2001 to 2006, Ischinger was Germany’s ambassador in Washington. During that time, he was faced with unparalleled challenges, including the September 11 terror attacks in New York and Washington only months after taking office. Ischinger advised then-Chancellor Gerhard Schröder to act immediately in expressing Germany’s “unlimited solidarity” with the US. Later, after Schröder refused to take part in the invasion of Iraq, Ischinger had the unthankful task of representing a non-participant country that nevertheless insisted on its continued loyalty to the Western alliance, at every turn trying to assure the American people of Germany’s commitment to an indivisible partnership. And that’s exactly what he did, in countless interviews and talk shows, at a myriad of events and by organizing German-American friendship weeks. It’s not often that an envoy of Germany’s Foreign Office is required to make a series of appearances bearing messages of goodwill in an attempt to solicit sympathy – not in spite of Germany’s non-participation in the Iraq war, but precisely because of it, and because of the fissures in the personal relationship between the leaders of the two countries. These years represented Ischinger’s greatest political challenge, as well as the likely highpoint of his activity in the Foreign Office.

Once again, in retrospect, it’s as if Ischinger’s time in Washington was merely preparation for what came next. Years later, in 2012, after the resignation of German President Christian Wulff, members of the CDU-FDP governing coalition approached Ischinger and considered moving beyond their preliminary inquiry in the search for a successor. By then, however, he’d already found a new job.

When he left the Foreign Service in 2008, Ischinger embarked on a new path. He became General Representative for Government Relations at Allianz SE in Munich and took over as chair of the Munich Security Conference (MSC). At the MSC, as successor to Horst Teltschik, a former security advisor to Chancellor Helmut Kohl, Ischinger – ever the civil servant diplomat – entered the theater of geopolitical dialogue and exchange. He’d found his calling. In keeping with the historical developments of the time, he transformed an event that had hitherto focused on trans-Atlantic and East-West relations into a platform that addresses a variety of global perspectives and themes, such as the containment of regional conflicts and global wealth distribution. During his tenure as head of the MSC, the number of participants and attendees multiplied, without any decline in the quantity and quality of prominent guests, which to this day include presidents, chancellors, ministers, democrats and autocrats. Where else – except perhaps at the United Nations – have so many representatives from such different backgrounds gathered under one roof as at the Munich Security Conference?

The fact that new challenges lay ahead was foreseeable, all the more so in times of COVID-19 restrictions. Still, it’s possible that the handover of the leadership of the Munich Security Conference to Christoph Heusgen marks not an end to Ischinger’s journey, but a layover on his way to something else. Ischinger will continue to foster a deep connection to the MSC – beginning now as president of the Foundation Council.

Günter Bannas was Berlin bureau chief at the Frankfurter Allgemeine Zeitung and is currently a columnist at the weekly Der Hauptstadtbrief. 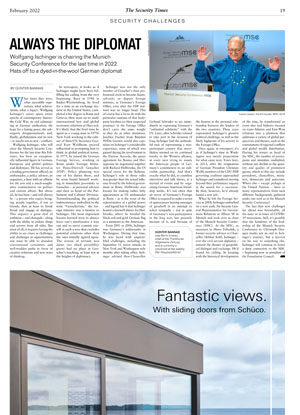